...Let's Learn About "Paa Willie" One Of Our Pioneering Fathers
By Akosua Tuntum Nahana 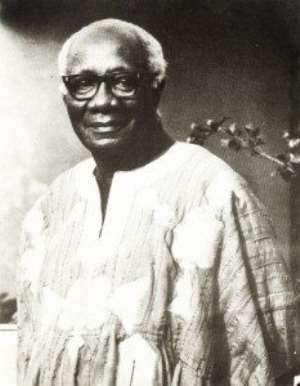 Paa Willie was born on 10/10/1910 to Nana Sir Ofori Atta I, Omanhene, the king of Akyem Abuakwa ( 1912 -1943) However Akans have matrilineal lineage, therefore Paa Willie was not a prince. His sister was Susan Ofori Atta ( Ghana's first female physician- she is the next feature) Paa Willie went to the Mpfanstipim school, in Cape coast. He was the first prefect and one of the first students to attend the Achimota school. Paa Willie's batch later became the main body of the University of Ghana ( Legon).

Paa Willie was a founding member of the United Gold Coast Convention ( The political party which championed Ghana's independence struggle against British colonial rule) and won one of the Akim Abuakwa seats in the 1951 Gold Coast election. Later on he became a foe of his former colleague, then president, Kwame Nkrumah. They had different political ideals for running the country. He was the leader of the United party, the opposition to Kwame Nkrumah's party CCP.

He was among the founding fathers jailed by Kwame Nkrumah, in the time of the first republic on the Prevention Detention Act. In the second republic Paa Willie was Minister for Education, and later Minister of Foreign Affairs in Kofi Busia's government. Paa Willie was a force in the People's Movement for Freedom and Justice ( PMFJ) that lobbied against the ' Union Government' ideal of General I.K Acheampong ( Head of state for Ghana and Chairman of the Supreme Military Council) Supreme Military Council was also known as SMC. The Union Government was an idea that promoted more military rule instead of civilians being in control of their democracy. After the SMC fall, he stood for president in 1979 and was third (17.41% of the popular vote). Paa Willie went on the become the chairman of the Council state for the Third Republic.

Paa Willie paid tribute to his friend and the founder of the United Gold Coast Convention JB Danquah, by delivering the J.B Danquah Memorial lectures with the topic " Ghana, A nation in crises" organised by the Ghana Academy of Arts and Sciences ( 1985).

Paa Willie was given a state burial after his death in 1988.

William Ofori-Atta Memorial lecturers were giving to pay homage to him after his death.

Paa Willie was really a Ghanaian father, it's a shame his sacrifice and achievements are not as celebrated as they should be. He deserves more praise than escalators in Accra Mall or KFC coming to Ghana.