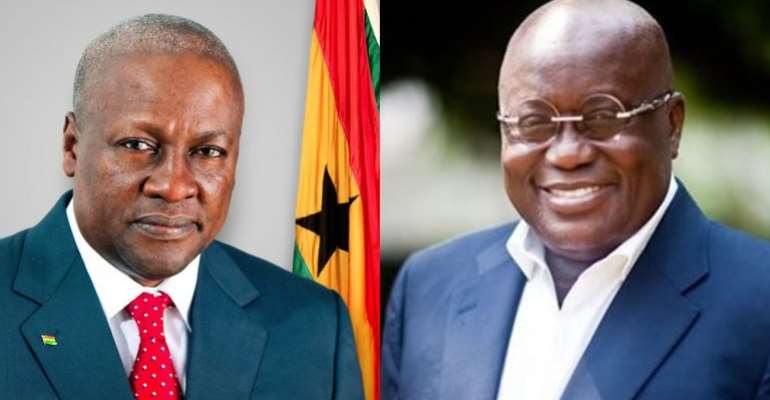 Our sages of old were right when they taught us that an elder who sits at home and allows children to eat python will not be left out when the roll call of python eaters is conducted. The elder is supposed to know better, command authority, exude wisdom and call the young ones to order when they go wayward. For this reason, the elder should not escape blame if he or she looks on or deliberately looks away while those under him or her are engaged in wrongdoing.

When that elder pretends not to be looking, allows the mess to be caused and then comes back to speak empty words against the act, then he ought to be reminded that any man who cultivates his farm with only words will definitely harvest weeds.

President Nana Addo-Dankwa Akufo-Addo has always been condemning acts of violence perpetuated by known thugs of his party since he won the December 2016 election. Before he took office, the nation witnessed violent seizures of public toilets, tollbooths, markets and the locking up of offices among other barbaric acts of lawlessness. The culprits are known. The president condemned the acts. But no one has been jailed for these criminal acts.

Two months after the president took office, twenty (20) people were killed at the Kintampo Waterfalls in the Bono (I hope we will agree to stop writing “Brong”) Ahafo Region. Seventeen of them were students of Wenchi Senior High School. It had rained heavily that day, and some trees fell into the waterfalls, crushing them to death. This was an accident, but when questions were asked why authorities of the waterfall did not evacuate the children when it started to rain, it emerged that thugs from the President’s New Patriotic Party (NPP) had seized the waterfall and were running it. Professional tour operators would have acted differently and saved lives.

A deputy general secretary of the NPP, Nana Obiri Boahen, defended the take over of the waterfall. He said the National Democratic Congress (NDC) had done same in the past. Unfortunately, but predictably, nobody was punished or held responsible for the loss of the 20 lives.

In the months that followed, the Invisible Forces, Delta Forces and other thugs from the president’s party took turns to dominate the headlines across the country for the wrong reasons. A weekly slideshow of violent takeovers became a national ritual and assumed a disturbing rhythm to which the nation danced dangerously along, hoping against an escalation but knowing that an explosion of violence is inevitable and imminent should things remain this way. The president missed no opportunity to condemn the acts, but nothing has come out of it.

This went on until the Delta Forces attacked the Ashanti Regional Security Coordinator and destroyed state property at the office. The President appointed the man, but the thugs thought he was not the one they liked. When some of them were arrested and taken to court, the thugs stormed the court and set them free. They were re-arrested and fined with peanuts. But those who stormed the court and set them free in broad daylight have not been touched.

The thugs did not spare the Presidency. A police officer on official duty was attacked and assaulted at the highly fortified Jubilee House, the Office of the President, but no single person was arrested or punished. Their impunity now wears a three-piece suit with a cowboy hut to match.

Commissioner of Police (COP) Nathan Kofi Boakye recently revealed at the 2019 New Year School at the University of Ghana that the police had lost the power to deal with thugs from the governing party, because the politicians would condemn the actions of the thugs in public but privately work against police investigation and prosecution. He said it was easy for the police to deal with vigilante groups from the opposition party, but whatever action the police pretend to take against vigilante groups from the governing party is a facade meant to deceive the public.

COP Nathan Kofi Boakye, in January, warned that if the activities of political party thugs, popularly called vigilante groups, were not curtailed, the 2020 election would witness an explosion of violence. My Gurune-speaking people would say Kofi Boakye spoke as if he was looking into water. What he said could happen in two years happened in two weeks.

On Thursday, Ghanaians woke up to heavily armed and masked men who were deployed on the morning of the Ayawaso West Wuogon by-election. The havoc caused by the trigger-happy men with arms is well documented. They shot at unarmed civilians, assaulted people, including a member of parliament and did not spare the police. The Coalition of Domestic Election Observers, which monitored the by-election, reported of the violence and intimidation in a press statement it released after the election:

As predictable as the ritual journey of the sun from the East to the West, President Nana Addo-Dankwa Akufo-Addo condemned the violence:

“The isolated incident of violence, which occurred in the early stages of the election, was unfortunate and regrettable, and I condemn it in no uncertain terms. A by-election should be a peaceful and happy event, no matter how competitive. The Police is committed to conducting a rapid inquiry into the matter, and I expect all persons who are found culpable, at the end of the process, to face the full rigours of the law,” the President said in a press statement.

To put weight on the President’s condemnation of the Ayawaso violence will be like putting premium on the words of Akpeteshie Kwaku or Kofi Kagyingyi, the two notorious drunkards who used to roam the streets of Kete-Krachi whenever the intoxicating liquid from the palm trees seized control of their nervous system and anointed their tongues with vulgarities. It will be like trying to convince an adult with his or her sanity intact to trust the promises a man makes to a woman at the peak of his sexual ecstasy.

The armed men, we are told, were deployed by the National Security. The Minister of State in charge of National Security, Bryan Acheampong, has confirmed that. When they later removed their masks and their pictures got onto the Internet, people identified them as party boys of the NPP. It is no wonder, then, that they went into action with their faces, masked. I personally confirmed the identity of one young man who was linked to the NPP’s National Organiser.

It is unfortunate to say this, but that is the stark reality: the president’s words are empty and meaningless as usual. Nobody will be punished. The Inspector General of Police is as impotent as a castrated pig in these matters. He has been reduced to a puppet of the politicians and he knows it. Nothing will happen to anybody. No investigation will take place. Those who have been shot and maimed have be wounded for free. Nobody will be held responsible. The police officer who was attacked will not get justice. This will further sink the morale of the police service.

The NDC pulled out of the by-election and former President John Dramani Mahama did not mince words when he warned that the NDC would match the NPP “boot for boot” in the 2020 election if the NPP decided to continue with the violence. He went on to remind the NPP that the NDC comes from a revolutionary background and could not be outdone when it comes to violence.

The Chairman of the National Peace Council, Rev. Prof. Emmanuel Asante condemned President Mahama’s utterances: “I would want to say that President Mahama, with all humility, I will plead with him to apologise to the nation. In making that statement, he has really created fear in the hearts of people…”

President Mahama’s words are unfortunate, but President Akufo-Addo’s empty condemnation for the past two years of growing violence is worse. And if the Chairman of the Peace Council knows what creating fear really means, he should have first condemned the masked and armed men as well as those who deployed them. It is shameful for the Peace Council to see President Mahama’s speech as “really creating fear” when it failed to see the danger in deploying armed men outside the constitutionally mandated security forces to conduct operations during elections.

What will happen to the party guys being used by the politicized National Security when NPP leaves power? These men have been trained and armed. In the name of secrecy of the National Security, the arms and ammunition procured for them did not go through any transparent system. Apart from those who recruited and deployed them, nobody knows the number AK47 assault rifles, pistols and other weapons that are in the possession of these men. When the NPP leaves office and they are jobless, and the proverbial devil decides to find work for idle hands that are adept in the use of rifles, it will not place them in restaurants.

President Mahama’s words are condemnable, but in the current circumstances, he could not have said otherwise. The NDC had to withdraw from the Ayawaso by-election. Should the party withdraw from the 2020 election should these same forces go rampage and attack voters and police officers?

Former President Mahama, like those who complain about the growing insecurity in Ghana, is a powerless man. He has a role to play in ensuring peace in Ghana, but the man who has sworn an oath to keep this nation safe and has been given the power to do so is President Nana Addo Dankwa Akufo-Addo. He is the President and Commander-In-Chief of the Ghana Armed Forces.

Mr. President, in March 2016, I wrote an article saying that the NDC was persecuting your party members using the police and state security agencies. I said your party did not deserve our sympathy because if you won the 2016 election, you would do the same thing. You have escalated it to an absurd level. There will always be a thousand and one reasons to justify the madness if you want to pay back the NDC.

However, Ghana is not only about the NDC and NPP. If you continue this way, Ghana will burn, and there will not be any nation to house the NDC and NPP. Remember that the lion and the antelope and the lion are sworn enemies, but neither of them would set the forest that houses them ablaze.