The Nazis would have been proud of Ghana’s referendum results! 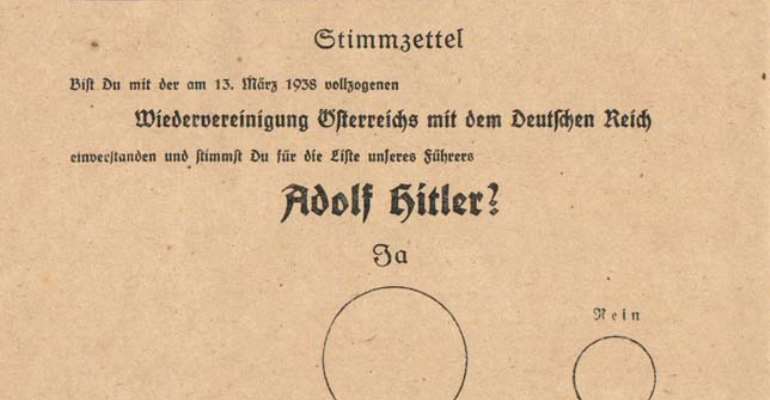 It was difficult to vote No!

The 1938 Anschluss was carried by 99.7% of the votes. The Nazis knew they were going to win it but they still made sure to rig it. The question on the ballot paper of Austria joining Germany was also tied in to a vote “for the party of our leader Adolf Hitler”. A Yes automatically meant a vote for Hitler. Oh, and for good measure, the circle in which you put your “Ja” mark was two times the size of the “Nein” circle.

Some of the results we got in December were better than the Nazis achieved in Austria. The turnout was also superb. Maybe 50% of the voters in each of the proposed regions really did come out to vote and, of these, 80% really did vote yes. So the motions were carried. But the final tallies are still very suspicious and we should all be concerned. Voter turnout in the 2016 general elections was 68.62%. At no time in the fourth republic have we had a voter turnout of 80% in any elections. Suddenly, we have these fantastic figures! It is true that the passion for an own region may be stronger than that for voting for politicians. But, still… Shouldn’t we be concerned because it strikes at the very heart of our democratic process? Shouldn’t we have the courage to cancel some results and re-run the thing correctly just like WAEC does to those it catches cheating in its exams?

Free and fair do not only mean what happens on Election Day. Even more important is the build-up to the day itself. Did both sides of the issue get adequate opportunity to argue out their cases and campaign for them? Were independent observers and journalists allowed during the build-up and on the Election Day itself to observe the process and freely report on it? Were pre-election polls that would give an indication of voter preferences allowed? Was the question on the ballot paper properly framed? Was the ballot paper itself designed as to give a fair chance to either side in the issue? In short, did the process bend over enough to be seen to be fair?

The referendums of December 27th do not appear to fulfil these conditions. For an issue in which the government should be a non-partisan facilitator and arbitrator, the present government took a decidedly partisan part. The government had already decided that the creation of more regions was a good idea and did everything to bring it about. It was a campaign promise by both major parties and the NPP government felt itself lucky to be the one to fulfil it. The NDC missed the bus on this one. The issue was not dispassionately discussed and the government exploited loopholes in Article 5 to ram its way through the process. The government now seems to be regarding the exercise almost as a motion of confidence in itself that it won. The president gave the Electoral Commissioner (his own appointee) a pat on the shoulder for a work well done despite numerous reports of fraudulent practices on the day of elections which are yet to be properly investigated.

This is very unfortunate. Yes, we need new regions. But how do we go about doing that and what reasons do we give for the particular regions we create? The main argument was that more regions will promote development. That was the government’s own line too. This reason was harped on so repeatedly that we forgot that new regions can be created even if they do not directly promote development. A region may be too wieldy and can be cut up for easier administration. The increase in our population and the change in its distribution may necessitate the creation of new regional administrative units. Now, we have treated the creation of regions with the fury and acrimony Nigerians display in the creation of new states where the stakes are much higher. The controversy surrounding the Oti effort, where the majority tribe was surgically excised from the new region, makes one believe that this is not really about development.

The constitution is partly to blame for the farce we saw on December 27th. Article 5, which provides for how new regions should be created, is too vague on some of the important issues. It is clear that the framers of the constitution did not foresee the fact that the creation of new regions will become such a politicised matter. Perhaps the constitution should not have given the power to create new regions to the people. The people are not always right. Article 5 seems to have been written principally to address demands for new regions from sections of the population.

In other countries, the creation of regions would have been handled by a purely non-partisan committee of technical experts who would consider every aspect of the issue and come up with recommendations backed by solid evidence. These recommendations would then be publicly debated. Parliament would also debate it and vote on it. It is not necessary to ask the people in the areas concerned to vote. Their wishes will be taken care of by their representatives in parliament. A parliamentary vote on the issue will be difficult to rig and will cost far less than asking the people to vote. This will have the added advantage of involving the entire country, through the representative body which parliament is, in what is happening in specific parts of the country.

It will make it possible for regions to be created according to need rather than just for the fact that some group of people in an area are crying for one. A technical committee may even decide that the creation of regions should be a gradual process rather than six new ones at one fell swoop. Such an approach (perhaps two at a time) will provide lessons that will be useful in the creation of subsequent regions.

We bungled a good opportunity. This is the first time in our history that the decision to create a new region was put to the vote. It has not really worked out well. We started at independence with five regions (Ashanti, Eastern, Northern, Western and Volta). Then Brong Ahafo, Central, Upper, Greater Accra and Upper East/West were created one at a time. Now we are creating six at a go at the cost of almost a billion new cedis!

We have shown that we cannot even organise a simple Yes/No referendum without any mishaps where the results truly reflect the wishes of all those eligible to vote on the issue. Those of us who watched the Scottish independence vote and the toxic Brexit referendum from close quarters can see what a long way we have to go to properly perform the democratic exercises that the British left us with more than 60 years ago.

In the end, the most important thing is how we develop the whole country and improve the lives of the ordinary citizens no matter the regions to which they belong. Partisan and tribal concerns should not be allowed to impede the important task of improving the lot of the people.

Withdraw Your Intimidating Soldiers From Ketu South — Reside...
7 minutes ago