Re: Creation of the proposed Oti Region 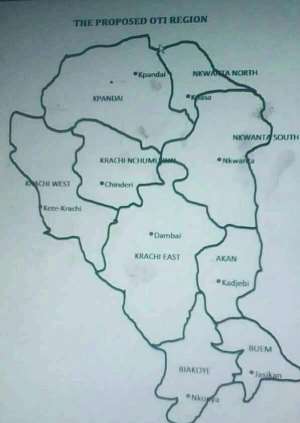 President of the Republic of Ghana

Re: Creation of the proposed Oti Region

Concerned Citizens of Volta Region (CVC) writes to express its concerns about the creation of the proposed Oti Region. CVC is an advocacy group of citizens and friends of the Volta Region at home and abroad. CVC is particularly concerned about the process through which the Government is creating new regions.

In late 2017, Your Excellency appointed the Justice Brobbey Commission (the “Commission”) to inquire into the demand for creating new regions. The Commission recommended the creation of 6 new regions, including one in the Northern part of the Volta Region to be called Oti Region. Further, the Commission recommended that a proposed referendum on the creation of the new region (the “Referendum”) be limited only to the areas in the Volta Region that have petitioned for their own breakaway region to be called Oti Region. Thereafter, the Electoral Commission set December 27, 2018, for the Referendum. Even though the law requires such a fact finding commission to release its report within six months of completing its work, the Brobbey Commission released its report (“Report”) just barely two weeks before the earmarked Referendum.

The Report fails to specifically name the petitioners for the creation of the new region. As the Referendum is premised on an alleged substantial demand for creating a

new region, one would expect the Report to specifically name the individuals or groups that are demanding the creation of a new region.

A review of the Report also shows that the Commission did not conduct broad-based consultations. Accordingly, the Commission’s recommendations are not representative of the broader spectrum of the affected people. Agitators for creating the new region cite the underdevelopment of their area as their reason for demanding a new region. In our view, the Government should have explored other avenues for developing the Oti enclave and other areas suffering from the same state of neglect.

Limiting the Referendum to those agitating for the creation of a new region all but guarantees a yes vote; making a mockery of the voting process. Furthermore, historical data on new regions created in post-independence Ghana does not support the creation of new regions. There is no evidence that creating the Upper East and Upper West Regions led to the development of those regions.

Regarding any assertion of an intra-Volta bias against the Oti area, it should be noted that over the past 18 years, 43% of Volta Regional ministers came from the proposed Oti area, 43% from Southern Volta and 7%; from outside of the Volta Region.

Your Excellency, CVC believes that peace and national cohesion are indispensable to national development. Similarly, we believe that the right result must not only be reached, but that process also matters. Proper procedure must not only be followed, but must also be seen to be followed. For it is only by so doing that the outcome can be accepted by all. Accordingly, the Referendum should be postponed, and the Government should take its time to organize a properly constituted Referendum.

Thank you for attention to this matter.

Yours in the service of Ghana,

For Concerned Citizens of Volta Region.

We’ll Resist Attempts To Use BOG’s Funds To Finance NPP’s El...
29 minutes ago