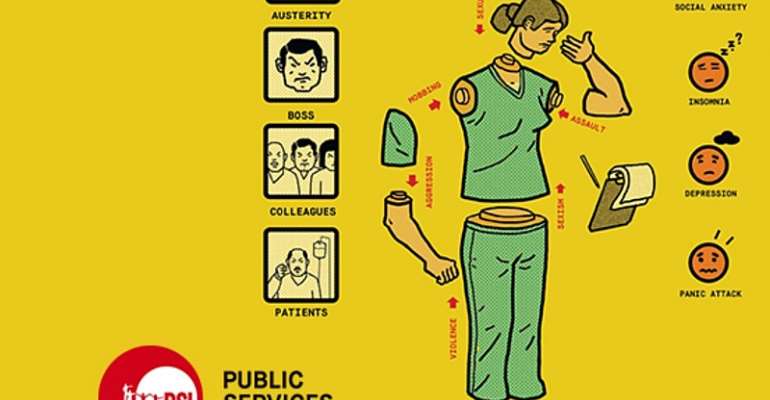 To mark the International Day to Eliminate Violence Against Women (IDEVAW) and 16 Days of Activism (25 November to 10 December), public sector unions launched a campaign to demand paid leave for all survivors of domestic violence. This is a part of efforts to strengthen labour laws and policies that can help stop violence and harassment.

“While the #MeToo movement has drawn global attention to the prevalence of sexual harassment, particularly in high profile industries, less attention has been given to the role which employers and labour laws must have in making workplaces safe for women. Effective workplace laws and policies can both stop workplace harassment and provide support for survivors of domestic violence” said Kate Lappin, Regional Secretary of Public Services International (PSI), the worldwide federation of the unions of workers delivering public services. A particular focus of the campaign is the demand for paid domestic violence leave. “Paid leave will allow survivors, most of whom are women, to attend to urgent needs such as obtaining legal and medical help, securing housing and opening new bank accounts, without having to worry about discrimination or losing their job” she added.

Kate Lappin further said that in addition to providing practical support to survivors, paid domestic violence leave helps change discriminatory social norms, which is crucial to breaking the cycle of violence against women.

I did an article series for Citizen News Service (CNS) documenting personal stories of courage of survivors of domestic violence in rural parts of Uttar Pradesh in India, in 2015-2017. Reflecting back it is evident from each of those stories that women, more often than not, wait to act when confronted with violence and abuse in their relationships. Also one of the most dangerous times for a woman in an abusive relationship which can further escalate violence and harm (even risk of being killed), is when she tries to leave and seek justice. Paid leave for survivors of domestic violence will go a long way in enabling them to attend to urgent priorities which are necessary to hold the perpetrators to account in court of law, and thus empower them to opt out of abusive relationships early on, with dignity.

1 IN 3 WOMEN WILL EXPERIENCE A FORM OF VIOLENCE

According to the World Health Organization (WHO), globally, 1 in 3 women will experience a form of violence.  In Australia, leaving a violent relationship costs $18,000 and 141 hours on average.

New Zealand became the second country to legislate for paid domestic violence leave this year granting survivors of domestic violence 10 days paid leave to allow them to leave their partners, find new homes and protect themselves and their children. The Philippines introduced the right 14 years ago through its Anti-Violence Against Women and Their Children Act of 2004. Laws providing paid leave relating to domestic violence also exist in Canada at a provincial level, in Manitoba and Ontario.

Paid domestic violence leave is included in the draft ILO Convention and Recommendation on Violence and Harassment Against Women and Men in the World of Work and unions are insisting it be retained when the proposal is debated next year. But a number of governments and many employer representatives want to water down the instruments.

“It’s hard to believe that some governments and employers still don’t want to do everything possible to stop violence and harassment” said Annie Enriquez Geron, General Secretary of the Public Services Labor Independent Confederation (PSLINK). “But we know that there are still attempts to weaken the proposed rules and we won’t stand for that” she added.

To kick off the campaign, PSI launched a campaign toolkit on paid domestic violence leave, in observance of the International Day for the Elimination of Violence against Women and 16 Days of Activism and the theme “HearMeToo”.

(Shobha Shukla is Managing Editor of CNS (Citizen News Service) and focusses on gender and health justice. Follow her on Twitter @Shobha1Shukla or be welcome to visit www.citizen-news.org)