There Might Not Be GJA Best Journalist Next Year 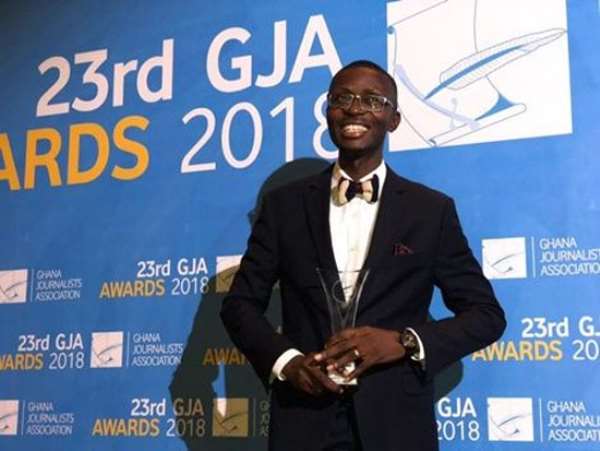 “Everyone who has commented on the controversy of GJA Awards has had the same difficulty: killing the tsetse fly (GJA) on the scrotum without hurting the precious balls” ~ Manasseh Azure Awuni, GJA Journalist of the Year 2011

The acclamation was infectious. No contest. No protest. No disagreements. It was as though the audience at the plush Kempinski Hotel had been involved in the selection process that eventually produced our journalist of the year 2017. Nobody was surprised at the verdict. The demeanour of the announcers added to the beauty of the whole affair: “The PAV Ansah GJA Journalist of the year 2017 is Bernard Avle.” Surreal. It was expected and perhaps he expected it, too. He had been a consistent and authoritative voice in the media space. No other journalist had come very close.

Avle Panache
It has not always been this smooth; we have had some very bland moments in the GJA awards, and also some great occasions. When Kokroko host Kwami Sefa Kayi won the coveted prize last year, we were fine with it, especially because no other journalist had occupied our minds as a deserving winner of the top prize within the period. Chairman-General is very good at what he does. We were not uncomfortable with the choice, except that we didn't seem too excited about it. It was like sickness and the cure mixed together. Indescribable. We went away not feeling cheated; we were just fine.

I sat behind Mabel Aku Banaseh at the Banquet Hall when she was pronounced journalist of the year. She seemed genuinely surprised. Didn't she know she was in the running? She strode majestically to the podium to receive her prize. I had been following her reports from the courts and had found them very succinct. Good enough to be journalist of the year? Why not? We were not disappointed. There were a few grumblings and murmurs of mild protest in the morning but Aku had already walked away with her prize. Affirmative consideration? Nonsense. Gosh, she could write for the New York Times.

Avle's was different. Total panache. On the night of the awards, I asked my wife who she tipped to win the coveted journalist of the year award. “Oh it's Bernard Avle or no award for anybody,” she submitted. She completed my thoughts; we were in each other's thinking. Over the year, the Citi FM morning show host had transported the noble art of news making and content interpretation into the stratosphere of broadcasting excellence. Kwaku Sintim Misa (KSM) called him the most compelling voice in Ghana.

Higher standards
In my previous column on journalism practice in Ghana a few weeks ago, I wondered whether Ghana had found an answer to Jeremy Paxman in Bernard Avle. I expressed some satisfaction about the quality of Ghanaian journalism and concluded that the standards were adequate for our purposes. I was confident that with some hard work, smarter reporting and better regulation, we would improve our professional practice to some higher levels. In the process, we might be able to correct systemic flaws, define the grey areas and tighten the loose ends. The potential is great and we are getting better.

We have the luxury to imagine many Bernard Avles as we continue to perfect a trade handed to us by patriots who risked their lives to extend the frontiers of our liberties and secure our constitutional rights to free speech. A few years ago, we couldn't think past Kwaku Sakyi-Addo and Komla Dumor when we thought about trailblazers in broadcasting and quality journalists. It was the same in entertainment and fashion. Top events had to wait for KKD if you wanted his Finest signature touch as master of ceremonies.

Today, we have a pool of fine talents to toss around. And they come younger, more creative and quite enterprising. However, we still harbour the benign feeling that the quality we have do not come close to Dumor and Sakyi-Addo. We have not had Nana Kofi Coomson's quality of writing for a long time. We have had some very good attempts but they are lacking in journalistic scholarship and intellectual depth. Perhaps, they set the bar too high those days. We haven't lowered it; except that we haven't matched it. There is all the difference and our top seeds in the trade acknowledge this truism.

Small media
Benard Avle is a salvaging reincarnation of the quality we lost in Dumor and the professional forte we still admire in Sakyi-Addo, Kweku Baako, Kwesi Pratt and a few others. He also represents the hope we have in small beginnings, that if we are patient to watch things form, norm and storm, we will see great performance at the end. His emergence on the radio scene may not be as surrendipitous and accidental as many in the profession. His boss, Samuel Attah-Mensah, had taken a wild chance on him when he didn't have a rich media CV. Bernard had learnt along and perfected his craft to stay relevant.

What did he bring to the Citi CBS? While he seems to study and research his subjects well and asks intelligent questions, it is the informal/family conversational style of discussion that makes the breakfast show unique. You don't feel intimidated calling in to speak your mind. It is not the same with their closest rival, where you are alienated and excluded if you cannot speak English with the 'Received Pronunciation' (RP) or with the linguistic elegance of the accomplished Ghanaian English speaker. In fact, you feel you need to wear a suit and a decent pair of shoes when calling from your bedroom.

Citi CBS has a relaxed style. The trio of Kojo Akoto, Boateng Akoto and Nana Ama, bring the family radio experience closer to you with good humour, sarcasm and some biting analysis. It is the kind of gossip you expect to hear next door. You can invite yourself in without an invitation. Yet, it is serious.

That is why Bernard Avle won. Who will be our best journalist next year? Nobody. Mark our words. And while we are here, let's ask why small newspapers are not winning awards.