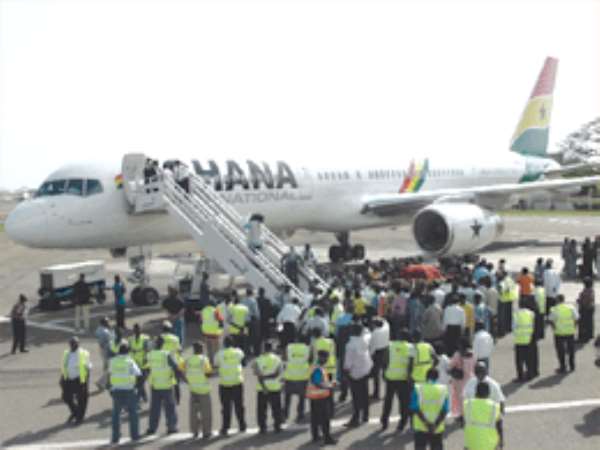 THE MUCH-publicised maiden flight of the new national carrier, Ghana International Airlines (GIA), landed in London Gatwick Airport, yesterday morning, to kick-start its daily flights from Accra to London. The Boeing 757 aircraft. which took off from the Kotoka International Airport (KIA). Accra at 11.30pm, on Saturday, October 29, landed at Gatwick at exactly 5.55am on schedule, amidst applause from passengers, including ministers of state and Members of Parliment. The aircraft, leased by GIA from Ryan Airlines, USA, for its London route, was fully booked with the new airline providing excellent in-flight services. GIA's arrival in Gatwick, was timely as it rescued 50 stranded passengers of Flyjet, one of the numerous chartered flights in Ghana, who could not make their return trip to Ghana with Flyjet, because of flight cancellation. Ghanaians in London, were exceedingly happy to receive the new airline, pointing out that, GIA will stem their frustrations at the hands of foreign airlines, operating from Ghana. Earlier, the Boeing 757 aircraft of 160-passenger capacity, with 144 economy and 16 business classes, was painted white, with bold inscription-Ghana International- in the background, while the tail was painted with the national colours. The aircraft has, on board, some Ghanaian cabin crew, as well as foreigners. Earlier, Mr. Kwadwo Mpiani, Chief of Staff, attended a brief ceremony at the tarmac, with top management officials of the Ghana Civil Aviation Authority, officials of the GIA, stakeholders in the aviation industry, as well as the president of the Ga Traditional Council, Nii Adotey Obour II. Christian prayers were offered by Father Stephen Adu-Kwanning of Christ the King Parish, while Islamic prayers and libation were also offered by Imam Hussain, and Numo Yemotey Odoi, La Wulomo, respectively. In an interview with the Ghana News Agency (GNA), Mr. Kwadwo Mpiani expressed delight at the inauguration of the airline, adding that, Ghana would be put back on the international aviation industry. He said, this would boost the tourism sector and business.
According to him, the Ghana government, which is the majority shareholder, would allow GIA to operate, smoothly, without interference.