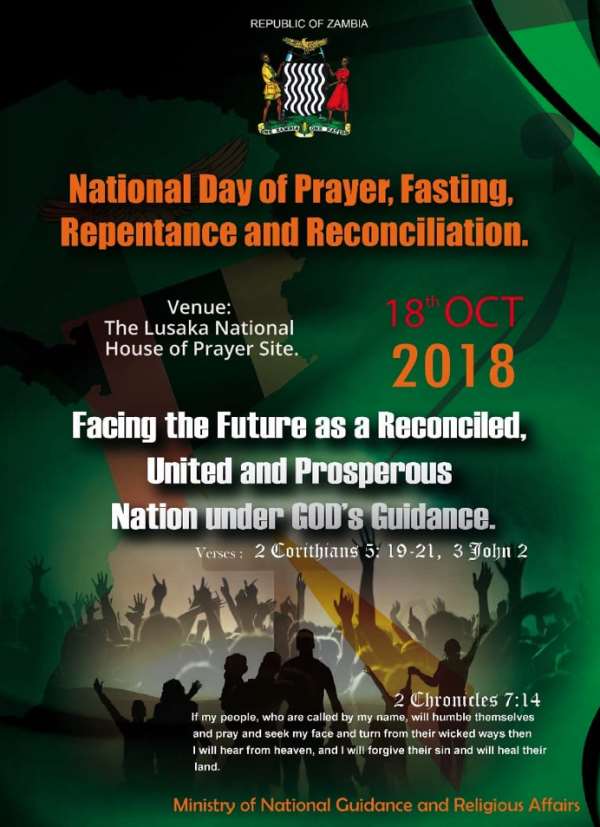 The web site has a bold inscription on its page “Start Planning” with a sub title: “Prayer Day Zambia”. This site lists October 18 as a national public holiday in the Republic of Zambia. The page goes on to provide a justification for this National Day of Prayer and Fasting: “Zambia is a much more religiously inclined nation than most others in the rest of the world, and it is also a nation with a large Christian population. In fact, about 75 percent of Zambians are Protestants and 20 percent Roman Catholics”. Zambia has a state ministry for religious, or better Christian religious, affairs that oversees this prayer day event.

Since 2015, this southern African nation has observed a national day of prayer. In the same year, its current President Edgar Lungu led the entire nation to pray for the appreciation of the value of the Kwacha, which is Zambia’s national currency. This year’s Prayer Day has a different focus: Fasting, Repentance and Reconciliation in Zambia. The state’s Ministry of Guidance and Religious affairs is planning an event at the Lusaka National Prayer Site. The agency has urged Zambians to face the future as a reconciled, united and prosperous nation under god’s guidance.

So, October 18 is a Prayer Day in Zambia. But it is important to ask: do all Zambians pray or plan to pray on this day?

So what could be responsible for the apparent indifference to the Prayer Day event in Zambia? Recently I interviewed some Zambians and they told me what they plan to do on the prayer day.

Sara lives in Kitwe where she works with a car company. A self styled atheist in the closet, Sara thinks that the whole idea of a prayer day is “useless considering the state of the economy”. She plans to go to the office on that day because she has an online training”. Another Zambia said he would “devote the day to blaspheming on face book”, that is, posting comments that are critical of religious beliefs. While this Zambian said: “I think many on this day will not care about it as much as atheists, given the current state of economy. I personally will be reading or having a laugh with my family or friends. It will be like any other day for me”. Others outlined their plans as follows: “It will be a day like any other for me... It's not my program”. "I will work on that day", “I will be drinking my beer”. “I will be doing some ungodly stuff”. “I will be out drinking with my hypocritical religious friends. I know they won't go to church. Some Zambians offered their thoughts regarding the prayer day program: “I wish it would be a day of reason; to protest the mental enslavement and colonization by religion. I wish it to be a day to put up billboards showing the absurdity of prayer days with statistics showing the zero impact of previous national days of prayer. So while Zambia may be one of the most religious nations in the world, there are a variety of ways that the people observe the national prayer day. Indeed on this day, Zambia prays but also Zambia works. Zambia thinks. Zambia drinks. Zambia doubts. Zambia blasphemes.

The author has 351 publications published on Modern Ghana.