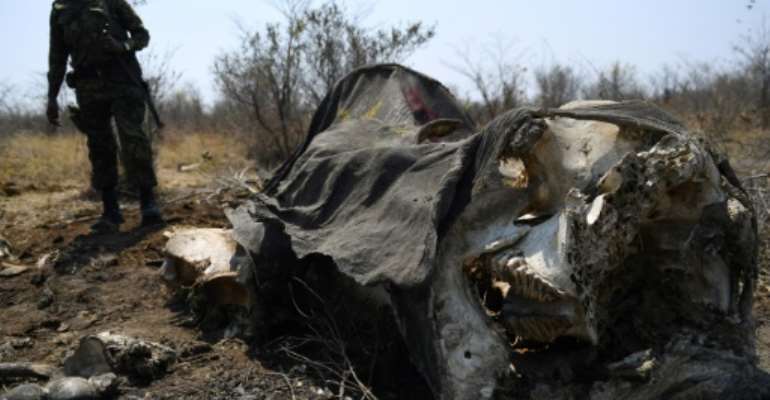 Botswanan authorities showed journalists the carcasses of dead elephants in the Chobe National Park but denied an alleged rise in poaching. By MONIRUL BHUIYAN (AFP)

Botswana has rejected claims of a surge of elephant poaching made by a leading conservation charity and put on display carcasses of animals allegedly slaughtered for ivory -- some with tusks still intact.

Elephants Without Borders (EWB) claimed two weeks ago that it had discovered at least 87 elephant carcasses during a routine aerial survey of conservation areas, suggesting a sudden spike in killings in recent months.

The claims led to global media attention and questions were raised about Botswana's anti-poaching efforts.

But officials demanded to see EWB's proof and subsequent visits to the Chobe National Park located just 19 corpses -- only six of which were found to be poaching victims.

"Last year, the whole year, we lost about 81 elephants. So I can say it's just normal, like any other year, we haven't recorded any mass killing," said Churchill Collyer, the deputy director of the Department of Wildlife and National Parks.

Officials added that since the start of the year, a total of 63 elephants had died across the country and that there had been no noticeable increase in elephant poaching.

Around 40,000 African elephants are killed every year for their tusks, according to conservation groups.

The elephants are illegally traded as part of a multi-billion dollar industry that extends from Africa to Asia and beyond.

Botswana, which has Africa's largest elephant population, is on the frontline of the battle against the illicit ivory trade. 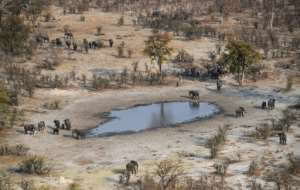 This week, the country's authorities took journalists to the vast Chobe National Park in the northeast which has more than 100,000 elephants -- the country's largest concentration of the animals.

Several hours spent flying over the reserve which borders Namibia, Zambia and Zimbabwe, showed six elephant carcasses, four of which appeared to have been poached.

"This is almost more than six months since it was killed," said Collyer of one animal with dried, perforated skin and missing tusks.

Around 20 kilometres (12 miles) away, another decomposed carcass was found but when EWB led rangers to it, the tusks were still intact, suggesting it was not killed for ivory.

"The cause of the natural death could either be from old age, from diseases, from starvation during the drought season," said anti-poaching deputy brigade commander George Bogatsu, a six-year veteran of the fight against poaching.

He stood next to the carcass with an assault rifle slung over his arm and a handgun tucked into the side pocket of his camouflage trousers.

The animal was one of those counted by Elephants Without Borders as poached. EWB said in a statement that "an unusually high number of elephant carcasses were seen by the survey team".

"Our current survey adheres to the highest international standards," it added.

'No cemetery in the wild'

"There is no cemetery in the wild -- animals like elephants will take years and years to completely disappear" from the spots where they die, said Simon Barwabatsile, the country's anti-poaching coordinator.

EWB had been contracted by Botswana to conduct aerial elephant population surveys. Before concluding the work, the group's director Mike Chase said the survey pointed to elephant poaching on a scale "by far the largest" in Africa.

He said it coincided with the disarming of Botswana's rangers earlier this year.

But the military insisted it remained ready to repel poaching gangs armed with high-powered rifles.

Barwabatsile said there had been "legal issues" about rangers being armed with certain guns.

"There's been a withdrawal of some arms from the anti-poaching unit within the department of wildlife and national parks," he said.

He could not confirm how many weapons -- understood to be fully automatic rifles -- had been taken out of circulation.

A group of other wildlife conservation groups said last week that civilian rangers are still armed with "high-calibre weapons, but no longer carry automatic assault rifles".

Some in the conservation community have suggested that Elephants Without Borders made such alarming claims because of "vested interests".

Survival International's Stephen Corry said he expected more reports "stirring up panic over the increasing threat of poaching" as groups raise cash ahead of a conference in London on the illegal wildlife trade next month. 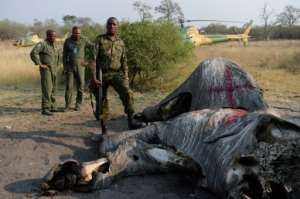 But EWB insisted that "given the high number of elephant carcasses seen during the survey, EWB felt it a moral and patriotic duty to immediately report this."

"EWB's sole concern is for the wildlife and the natural heritage of our wonderful country."