Thoughts Of A Nima Boy:   The Sajjad I Knew 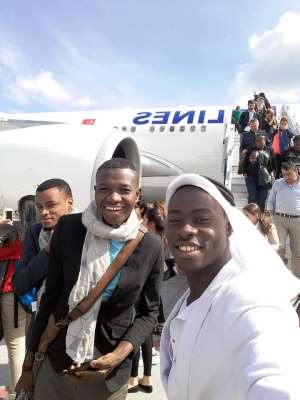 The Sajjad I knew was lowered into the bowels of the earth last Sunday by a gathering of well-wishers and mourners. Young men with a melancholic deportment and a lady (who stood far from the burying gathering) with a sad appearance that gave an indication of the mood in which we found ourselves. It was a sad mood. Sad because we buried neither a septuagenarian nor a nonagenarian. Sad because the one we buried was a young man full of life. He was vivacious, free-hearted, energetic and had an irrepressible affability. Sad because as young as we were, we realized the certainty in the uncertainty of death. It could come to any of us at any time. There is nothing poetic about it. Our elders did not mince words when they stated that “but let the slave who sees another cast into a shallow grave know that he will be buried in the same way when his day comes.” That captured our sadness. That one day, willy-nilly, we will be interred. And it could be any day.

The Sajjad I knew was artistic in his appearance, his speech, his approach to issues and life. And one could sense that in his office arrangement and even the car he drove. A character he developed from childhood. His colleagues the Institute of Islamic Studies, Research in Nima reminisce the fact that he was always organizing drama shows and everything involving the expression of the inner feelings of man which in the end leads men to as the poets described “suck the marrow out of life.” And this artistry reflected in his speech. The way he stringed words together leaves you mesmerized and in the enchantment of the moment, gets you convinced. He pushed this through all the way to the University. At Islamic University, he directed a movie titled “Eclipse of love.” A movie that highlighted the greatest force on earth, the harbinger of hope and the purveyor of life, love.

The Sajjad I knew was a non-conformist. “Sajjad was not your normal academic student. He was always swimming against the tide. He tries to create his own environment.” This is one of the testimonies his colleague at Ghana Lebanon Islamic School (GLISS) made. Perhaps that partly explains why many did not understand him. We have a culture that has deep in its aim to produce people with herd mentality. People who think like the herd and in the words of one author “behave like the crowd and smother the fire for outright greatness that is the natural birthright of every one of us.” I wrote somewhere that this is why the world struggles to understand those who invent and innovate; those who refuse to stay in line, those who can’t accept the societal pull to fit in and be comfortable with the humdrum of mediocrity. They are labeled as weird. Many describe them as misfits. A lot more tag them as strange. Sajjad was misunderstood by many of his colleagues. Until he fell terminally-ill, many had their reservations on his activities. We saw on social media how many who wrote unprintable words against him started singing his good works more than the choir when clouds became dark. When he contested for the President of the Students Representative Council at Islamic University, he lost. However, he believed he did not lose on a level playing ground and set-off an interesting litigation which resulted in his expulsion from that institution.

The Sajjad I knew smiled as he narrated to me how he thought his campaign message irked some people in the administration of the school thus swore by hook and crook to see him unsuccessful in that endeavor.

Come to think of it, Sajjad wanted to bring Islamic University, a neophyte of a sort into the higher heights Tertiary Students politics. He wanted to introduce that high-level politicking, the grueling electioneering and adrenalin-filled activity that happens on other campuses into the university. Thus interestingly, we saw what happened.

The Sajjad I knew was a student on the IUCG campus yet had influence whose tentacles spread across the length and breadth of the campus in the country.

He spear-headed the formation of Debate Society of Islamic University. Pulled the school along to battle other institutions in debate contests and won.

This is what Caleb Kudah of Citi FM wrote “when we were in Legon, there was this guy from Islamic University, Idriss Sajjad Toppoh! He was always full of life. During our debate contests, he didn't need a microphone, not even in the Great Hall. He was a passionate debater, always had a story to tell that will put smiles on your face. Easy going? Yes. But Sajjad hated to be cheated. The fighter he was, Sajjad will fight oppression in any form with tact and where need be radicalism. You may beat him in a debate, but he will win you over as a person. When University of Ghana sponsored myself and my colleagues to Malaysia, he came too. Even if his school wasn't participating, he won't miss the experience. In fact, he went on to Singapore all by himself, to participate in the public speaking contest there. He won a medal. I thought I loved public speaking and debating until I met this dude.” Let that sink in…..

The Sajjad I knew was a change-maker. He believed we could change the narrative about our Zongo communities. His incisive write-ups on this quest abound on his social media handles for all to see. He did not only pontificate about Zongo Renaissance, he supported numerous organizations who are working hard to achieve that. In 2016, Sajjad was honored amongst numerous others as those whose lives are a gale of inspiration to the Zongo youth. And this citation was the first you saw anytime you entered his office.

The Sajjad I knew realized the unemployment rate in town and tried his best to give employment to those he could. One fine morning in August, 2016, I received a message from him that I should come around for a discussion at his Ekhlas Professional Services Office at Madina- Firestone. We met and it was an opportunity he wanted for me. He wanted me to be the Public Relations Officer of an organization, Ekhlas Foundation. The organization’s aim was to provide help to people financially. We had discussed salary and everything. My first task together with a colleague was to find a spacious office for rent in the heart of town. Interestingly, my first ever quest to go asking for a place to rent was inspired by our departed brother Idriss Sajjad Toppoh. We could not take-off fully because of family issues I was and still not interested in.

I can never state this without letting the public know that the organization had even started organizing programmes such as Quranic Competitions in Tamale and at Madina, Accra. The organization got renamed into Sanusi Salis Foundation “in honor of Brother Sanusi Salisu, a young comrade who passed on to glory recently” per Sajjad’s reasoning. Sadly, the honoring will continue yonder there as he has crossed over to the shores of the afterlife to meet Sanusi Salis.

The Sajjad I knew was always creating programmes. He created and hosted a TV progamme on Faith TV. A programme that hosted Zakir Naik, Khalid Yasin and other world-acclaimed personalities. According to the Programmes Director, they had about fifty-two editions and were far advanced in plans to host the now Vice President of Ghana, Dr. Mahammadu Bawumia when Sajjad got taken ill. He organized and partook in Inter-faith dialogues and debates.

The Sajjad I knew was very ambitious. And this is the first description all his colleagues in Senior High School had of him. Ambition is not bad as some people want to portray it. Marcus Garvey taught the poor man to be noble and ambitious. His aim in life was to be a President. Anytime that question popped up about what he wanted to be, he replied that “it is apparent I am going to be a President.” He was the Senior Prefect at GLISS Junior High School. A feat he repeated in Senior High School. And as a colleague analyzed, he had wanted to win the SRC President of Islamic University push it through to grab the Private Universities Students’ Association of Ghana (PUSAG) to the National Union of Ghana Students (NUGS). But the timeless saying that “man proposes but God disposes” proved true.

The Sajjad I knew was a human being with a head on a neck. And deeply embedded in the human make-up is fallibility. Sajjad stepped on toes. His ambition sometimes drove him over board. And he found himself in a business that thrived on raising high expectations; Travel and Tours and low rate of meeting them. His activities in life have seen him vacillate at a point in various aspects. But that all proved one basic fact. He was human and not perfect. We pray to Allah forgive him his sins.

The Sajjad I knew could never be captured in a single piece. He was large and in charge. He never wanted to be called boss though he was. He was very humble in all his human-dealings. His oft-repeated statement was ‘Maa shaa Allah’.

His colleague back in Senior High School, Alhassan Tahiru Manaf concluded on a nostalgic note. He reminisced that “Sajjad was bold to go for what he wants and believes in. It was normal for him to miss class to attend meetings and come later in the course of lessons when much has been taught. He walks in holding his file, with the usual "ko ko ko" sound of his shoes. Takes his seat. Teachers will chide him every now and then for prioritizing extracurricular activities more, but this was someone who had a plan and was really unfazed. All he does was to laugh or smile about whatever is being said about him.

I will really struggle to recall a moment of anger shown by my brother. He laughs with everyone. He plays with everyone. He lives in a free world. His personality was so charming that he won everyone over when he was campaigning to become the Boy’s prefect which he resoundingly won. By far the most popular person on campus.

Today I see a picture of Sajjad and I see a broken mirror. I see potentials turned upside down. I see talent inverted. I see a great personality in the making in broken pieces. And I ask myself, why??? I thought some mirrors will keep reflecting without breaking? I thought the journey would be a success without any fallouts? I thought we will all get there with shiny and fresh skins with no bruises or scars.

Time changes and so do people. Things happen, but the will of Allah prevails alas! This isn’t the end of the story. You have suffered and Allah knows best. I stand on your behalf to ask that anyone who has been offended or hurt by you to forgive your actions for the Sajjad that I know will always mean well. We are human and fallible by nature. We wrong others and so are we wronged, but a forgiving heart we need.”

Inusah Mohammed.
[email protected]
NB: The Writer is a Youth Activist, Student of Knowledge and a Book Salesman.