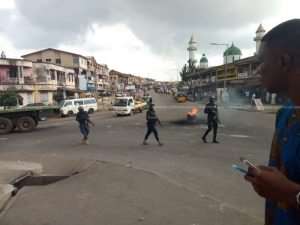 Police officers stationed within various communities in the Asawase constituency in the Ashanti Region, have withdrawn their services.

The officers are living in fear of attacks following the killing of seven zongo youth by police, which led to days of protests by angry residents.

The President of the Council of Zongo Chiefs, Naaba Musah Akabonga, who confirmed the situation to Citi News, called on the youth in the area “not to see the police as enemies.”

“Be patient, the government has set up a committee of inquiry. We are convinced that the committee will do its work as it is expected and will submit a comprehensive report that will satisfy all of us. I plead with the youth not to see the police as an enemy,” he said.

He added that this development has led to traffic jams in the constituency as there are no officers to direct the movement of vehicles.

“Since the incident occurred, the police have withdrawn their services at Aboabo, Asawase, Adukrom, Saabon Zongo and all the other places. Because of this, we usually have traffic jams. They shouldn't have any conflict with the police but allow them to come and do their work. I want to ask them if we have a problem, who do we go to? It's definitely the police. We must try and live as one with the police.” Protesting Zongo youth chase away IGP

In July, while the youth were protesting the killing of their colleagues, the IGP and his entourage were chased out of the community when the police chief went there to try to talk things out with the leaders.

The youth defied riot control measures by the police and pelted them with stones and other projectiles as they lined up to attend a meeting with the leaders of the Zongo community.

Two police vehicles that were seen driving to the mosque had to turn away after some of the youth started throwing stones at them.

They also prevented the then Minister of Information and the then Zongo and Inner Cities Development Minister from attending the meeting.

The young people were burning car tyres and blocked all roads leading to the central mosque.

Relative of the seven who were killed have insisted that the men were not robbers as claimed by the police, and that the police framed up the deceased by planting weapons on them after they were gruesomely killed.

A group that calls itself Sabon Zongo Concerned Association has called on the government to make public findings of the independent committee set up to investigate the killings.

It threatened to seek support from some international bodies if the government should fail to give a fair hearing on the matter.

I Didn't Close Down The Radio Stations, I'm Surprised — Akuf...
1 hour ago