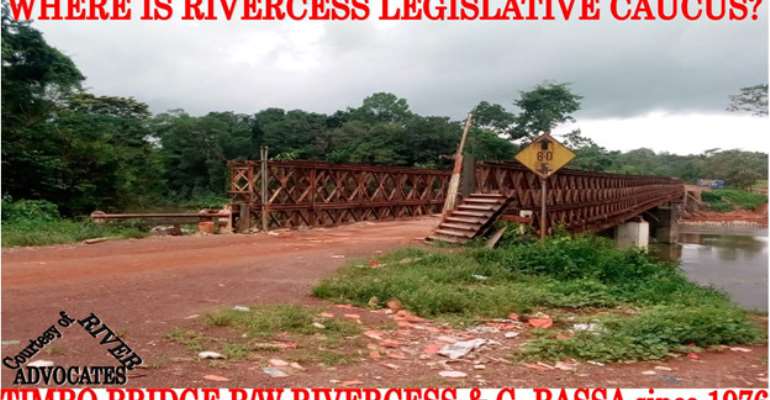 Congrats for your journey for political greener pasture!

With uncontrolled devotion for my county, I feel committed to express my earnest idea on issues that flanked the assets rich province of Rivercess.

It is my most grounded trust that this letter meets you in great fate and may it trigger the course of your still, small voice.

I am a son of Rivercess County who went for battling with the last drop of my blood against chances made by terrible leaders of my province. Distinctly, I hailed from Tow Town, (Nyonwein District, Rivercess County) bounded west by Yarpah Town and east by Gbezee Town.

What's more, once more, my age of autonomous scholars couple with scraping inquiries from posterity, will scorn me in wild cries as a Collaborator to stifle the mass of the citizens of my province, in the event that I don't LEGALLY AND EMPHATICALLY CAUTION you leaders for your terrible leadership posture taken since they were chosen. The radiance of patriotism has kaput in me a reflection of sensible contemplations to dependably look for the welfare of a dying people because of a plot of degenerate lawmakers purportedly imitating as legal and critical personalities. In the event that true men of the Caucus were ethically birthed into a battle to require themselves to those on edge inquiries of tomorrow due to their deeds of today there wouldn't have been any deception and terrible administration allotted on the beneficial children and adults of our country. Since history has her own particular understanding to the unmistakable occurrence of events as per sided perspective of the author, men of your clique have rashly treaded the way of primrose. Considerably, the aspiration and enthusiasm for our people reclamation is crushed by cavernous pockets gluttons and economic marauders seated as RIVERCESS LEGISLATIVE CAUCUS MEMBERS.

Honorable Chairman, as a star of political law, I am trail-blasted to evaluate the three cardinal elements of a Lawmaker to a justly oblivious citizenry as sacked by components of RIVERCESS LEGISLATIVE CAUCUS and the subservient local administrators. Understanding progressive persuasions of governmental issues involves readiness to instruct and induce our citizens against a faction motivated by retrogressive considerations and scholarly shortage, an errand that I can't deferred for anything except if change and political fairness thundered among our people of Rivercess. These three capacities are Lawmaking, Adequate Representation and Oversight.

LAWMAKING: The voiceless individuals of Rivercess through the radar of awareness have engaged me right now to take a calm reflection and ask; what number of laws have the Caucus upheld at the advantage of the general population of Rivercess? The most Controversial Oil Block 13 of the Sirleaf's Administration and a fascination for the Weah's Administration is wonderfully situated in our county. However, what number of our residents has been sent to another country for progression to secure such honored asset for offsprings of the land? Our people set aside extraordinary opportunity to ask for the individual Bill supported/bolstered by you the simple tissue that once encountered the hardship of the classroom and other who sold terminated medications for survival yet you see subjection of our people as a negligible political delight. THIS IS A CRUEL AND DISCONTENTFUL COUNCIL OF CALLOUS ELDERS! How truly has the Caucus comprehended the Social Corporate Responsibility of Companies lawfully working in the county? Were there benefits given to the region and the Caucus strangulated the general population? What segment of the County Social Development Fund took into account instructing the adolescents of the region? What have been the infrastructural ventures of Companies the Caucus has argued for to Plenary? Where are the laws you upheld to secure the forward match of the county? With these focuses to contemplate, I hold that there exist no small amount of proof in regards to reverberate Lawmaking by the whole Caucus, rather an unquenchable cartel of twofold merchants and human-tissue vultures who have drained the province with no improvement and progression as advantages. WHY HAVE YOU ELDERS PLACED RIVERCESS ON THE LIP OF DEVELOPMENT?

ADEQUATE REPRESENTATION: Placing the Caucus on an equitably touchy magnifying lens, I have imaged microorganisms that are LEFTOVERS of debasement, terrible administration, deception, financial ravaging, peoples' subjection and languid scholarly considerations as red heavenly clothing types worn to keep down the aggregate predetermination of a misdirected people. What has been the Caucus understanding about satisfactorily speaking to the mass of the general population of Rivercess? There are in excess of four logging organizations right now working in Rivercess some of which are Forest Venture, Mantra, AJ and J, and ICC among others. In spite of the fact that their concessions were marked by most of the Legislators at the House of Legislature, likewise the Caucus has a more prominent stake in looking for a bigger number of advantages for the area than some other province Lawmakers. Be that as it may, we have not known about any scholarship grant from any of the concerned organizations. Why? How satisfactorily have the Caucus spoken to the Interest of the general population with respect to the Liberia Oil Block 13? Where are your imprints for the advancement of an assets rich county and its kin? Adequate Representation doesn't put the mass of individuals on the edge of contemporary democratic experience rather it revives and refines our assets rich county to a superior position as characterized by our sent out resources. What number of occupations has the Caucus made/pushed for to profit the mass of her subjects of the region to the detriment of these mining and logging organizations? Logging organizations have tremendously harmed the sad roads that could take us home to pay regard to our Ancestors while the Caucus contrived with these organizations to obstruct road developments. IS THAT TRUE? Some of you have transparently expressed, verbatim "In the event that you report me to God, God will sit tight for judgment before he asks me" Yes! You all are on records, some of you judgment begins as ahead of schedule as 2020 took after by 2023 forward. The outrage of underestimation which has heated up the personality of fairly oblivious individuals will ascend against the cash some of you are subtly mixing at the downing of your peak with the expectation that you get resistance from fierceness of your deception.

OVERSIGHT: At the apogee of political awareness rests the ethical teach to stifle the oppression of soul and reestablish fulfillment in considerations and deeds. An acted educator, submitted Doctor, devoted Administrator and a heroically prepared activist are the preferences that society sees as great resound assemblies of oversight. This obligation drives on profound quality railroad with notoriety and honesty as travelers yet altered human powers have polluted this holiness. With this obligation your council did nothing to seek citizens’ welfare when FOREST VENTURE cut back natives of Rivercess in Zoryea Town four months after her assuming control and took outsiders. WHY HONORABLE CHAIRMAN? All in all, what oversights do you administrators believe is this duty? What oversight has your Caucus made for the County Social Development Fund? All in all, which interest is this Caucus securing the area or individual interest? Keep in mind that the people are the producers of history and not components of a bankrupt circle that considers voracity to be a staunch initiative apparatus. Allow me some time Honorable Chairman, one of the backfires of the Eurocentric theory on Africa is the disappointment of the Industrial Revolution to expand on the consecrated good standards of authority acquired from the old Afrocentric reasoning of Egypt. I am alluding to this situation to picture to the Caucus a missing line of consciousness that have caused its oppression of conscience to convey enormous hardship and spin the people around the field of desperation. What Oversight has this Caucus made for concretizing the TIMBO BRIDGE? This scaffold was darted on the Timbo River since the late 1970s. With the million tons of logs sent out and the colossal grams of jewels and gold separated from mineral stores in the province, this scaffold has been a noteworthy wellspring of transport course to send out these resources from the region however the Caucus can't backer to concretized this RUSTY STEEL BRIDGE. What is oversight with regards to the Rivercess Legislative Caucus? Honorable CHAIRMAN, why have you and your co-pirates reflected as seals of misrepresentations to assault a virgin region off her value? WHERE ARE THE TANGIBLES OF THE ELDERS COUNCIL?

Honorable Chairman, with respect to these three cardinal capacities, I'm immersed to jeremiad that the Legislative Caucus has done essentially nothing rather it has put RIVERCESS COUNTY ON THE LIP OF DEVELOPMENT. In this way, she has a gigantic assignment to rethink her improvement procedures and lead the region righteously to higher heights. The Caucus must comprehend that our people merit preferred portrayal and great administration over what it as of now speaks to. These cruel substances will be stood up to by social powers who comprehend you political elements; these events can't be described in light of the appalling intrigue to tear our citizens of their nobility and make them impenetrable to contemporary democracy. Liberia is an impression of decent democracy (courtesy of the Mo Ibrahim Leadership Award), accordingly universal accomplices expect that democracy is wandered, processed and polished among our people in the entirety of its four corners, which Rivercess is no exemption to. The Office of the Honorable Speaker will before long be locked in by cognizant voices of Rivercess in other to illuminate the House of Legislators that our legislative council has managed business of the under misrepresentation.

At last, Honorable Chairman, I set aside perfect opportunity to supplicate you and your kindred Legislators soul to consider from presently hereafter to seriously contend the course of the concessions that approved the permit of these concerned mining and logging organizations right now working in the province. RIVER ADVOCATES, a political and scholarly club I pleasingly and fearlessly have been chosen to lead and modify the course of democracy in my region needs to be clear here for the last time. We are prepared to exchange ridiculing for ridiculing, advertise lashes for lashes, and debate words for words on issues that alienate the formative plan of our county not an insignificant plan that squints on the lip of improvement. Now we send this as a proviso to you and the whole gathering that we anticipate that the Caucus will campaign within SIX MONTHS for the concretization of the primordial TIMBO BRIDGE. ANY ENDEAVOR TO WITNESS A PARALLEL REACTION TO THIS PROVISO WILL SET THE PHASE FOR THE ESSENTIAL FIGHT FOR OUR PEOPLE COLLECTIVE DESTINY. This battle will involve serious intellectual debates and protestations to expose the caucus of corrupt malpractices and mismanagement of the county social development funds for the past decades.

I move back the ink of my pen with the revered conviction that improvement anticipates us as a people if our leaders notice and lead the people rightfully.

A debt of gratitude is in order for managing us the chance to improve the situation of our county!

ABOUT THE WRITER: Mr. Daniel T. Bestman is a civil and human rights activist and advocate. He can be reached at [email protected] or WhatsApp @ +231776811809.