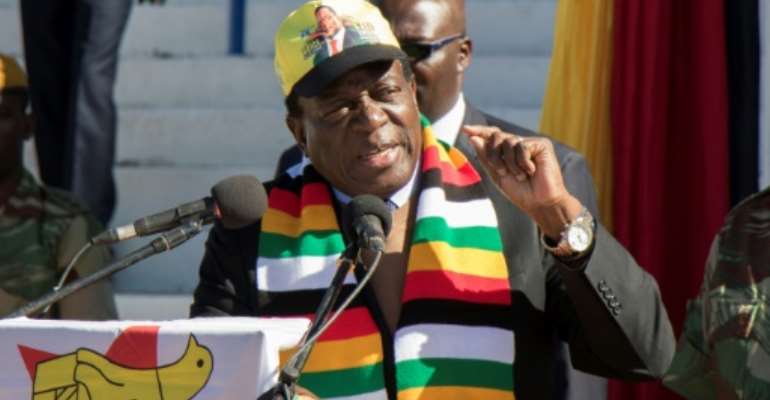 Zimbabwean President Emmerson Mnangagwa, pictured on July 21, 2018, has vowed to hold a peaceful and fair vote, but there is growing concern over alleged voter intimidation ahead of the eleciton. By Wilfred Kajese (AFP)

The United Nations on Tuesday warned of growing concern over alleged intimidation and threats of violence in the run-up to Zimbabwe's historic July 30 election, the first since the fall of Robert Mugabe.

Elections during Mugabe's 37-year reign were regularly marred by violence, but Zimbabwe's new leader, President Emmerson Mnangagwa, has vowed to hold a peaceful and fair vote.

The UN High Commission for Human Rights said in a statement it was "concerned... at the increasing number of reports, particularly in some rural areas, of voter intimidation, threats of violence, harassment and coercion."

"We call on the authorities -- and political parties and their supporters -- to ensure that the elections are not marred by such acts," it said.

The election campaign has been largely peaceful, and the UN welcomed the fact that authorities had allowed open political rallies and demonstrations in Harare, the capital.

Mnangagwa, a ZANU-PF ruling party loyalist who took over from the ousted Mugabe in November, has invited international observers -- including previously-banned European Union and Commonwealth teams -- to the polls.

The opposition Movement for Democratic Change (MDC) party and civil action groups have expressed fears of violence if the election result is close or fraud is suspected.

In 2008, then opposition leader Morgan Tsvangirai pulled out of the presidential run-off after attacks orchestrated by the state and ZANU-PF claimed the lives of at least 200 of his supporters.