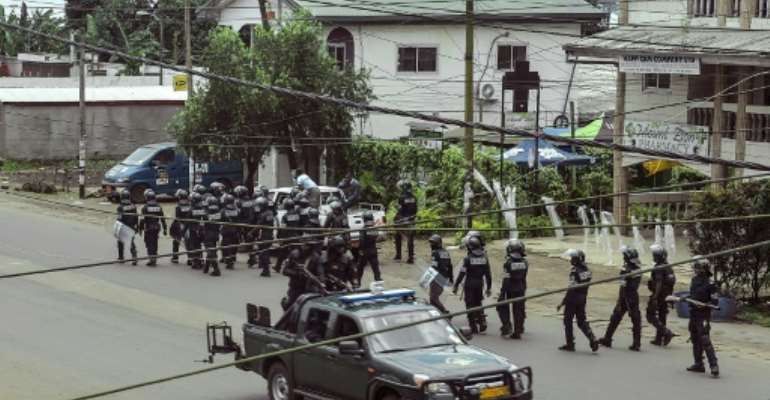 The crisis abruptly escalated last October, when separatists declared independence and the authorities launched a crackdown. By STRINGER (AFP)

The Roman Catholic church should mediate in the crisis in the English-speaking regions of Cameroon, where separatists and security forces are embroiled in a dangerous conflict, a thinktank urged Thursday.

"The Catholic Church could help break this dangerous stalemate," the International Crisis Group (ICG) said in a report.

"Other than the Catholic clergy, there are few prospective peacemakers," it said. "If no-one fills that role, the separatist sentiment already voiced by many anglophones will continue to grow, fuelling further violence and exacerbating the ongoing insurgency in the anglophone regions, with elections in late 2018 a flashpoint."

The crisis began in 2016, when activists in Cameroon's anglophone minority stepped up a campaign for greater autonomy.

Their demands were rejected by President Paul Biya, prompting radicals to make a full-blown declaration of independence last October.

Since then, 31 members of the security forces have been killed by separatists, according to an AFP toll based on official figures. The number of armed separatists or civilians killed by police and troops is unknown.

At the same time, humanitarian needs in the anglophone regions have grown. According to UN estimates, tens of thousands of people have been displaced by the fighting.

The ICG said the church could help by stating "its impartiality" on the big question facing anglophone regions -- federalism versus decentralisation.

"A clergy able to project a position of neutrality could work with other trusted actors to mediate between anglophone leaders and the state and stem a dangerous and growing crisis," it said.

The church is one of Cameroon's strongest institutions, as it is present in all of the country's 10 regions and nearly a third of the population is Catholic, the report said.

It cautioned though that the church also had to overcome its own divisions between French- and English-speaking clergy.

Cameroon's Northwest and Southwest Regions are home to most of the country's anglophones -- a minority of about 20 percent in the predominantly French-speaking country of 23.4 million.

Within the minority, a perception of injustice has grown that anglophones suffer discrimination in the economy, education and the judicial system at the hands of the francophone majority.

The anglophone presence is a legacy of the colonial period in Africa.

France and Britain divided up the former German colony under League of Nations mandates after World War I.

A year after the French-ruled territory became independent in 1961, the southern part of British Cameroons was integrated into a federal system.

Federalism was then scrapped 11 years later for a "united republic" -- a centralised system that 85-year-old Biya, in power for more than 35 years, has said will not be changed.

The ICG warned last October that "murderous repression" by the authorities would only feed secessionism -- a warning that the government lashed as an attempt to destabilise the country.