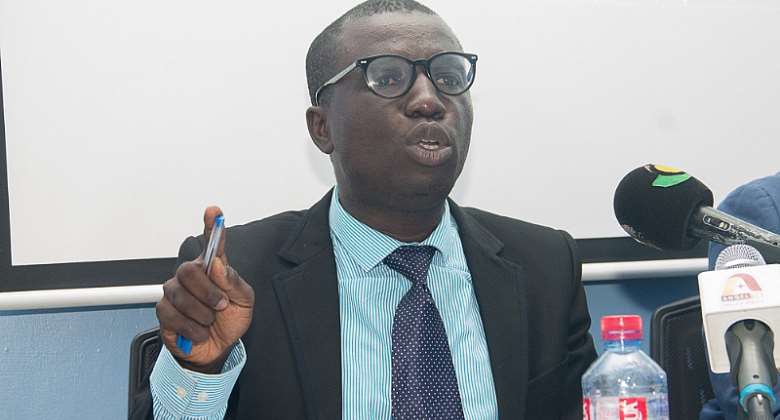 CUTS Ghana, a research and advocacy policy think tank in Accra has called on the government to enhance domestic revenue mobilization and to shy away from short term borrowing. Speaking before the press, the country coordinator for CUTS Ghana Mr. Appiah Kusi Adomako said though domestic revenue mobilization has gone up, yet there a lot of economic activities in the country that are not taxed.

Mr. Adomako pointed out that due to huge gap between government’s revenue and expenditure, government has to rely on borrowing to meet the funding gap. However, huge borrowing exposes the country to maintaining debt and its servicing, and leaves nothing for infrastructure development.

He added that tax to GDP ratio in Ghana is 17%; compared with a 19.1% average in Africa, 22.8% in Latin America and 34.3% in the OECD. Investment in the operations of the Ghana Revenue Authority (GRA) holds the key to enhanced domestic revenue mobilization.

Mr. pointed out that Ghana collects approximately 55% of its taxes from indirect taxes which include VAT, excise duties and customs duties), which have been found globally to be regressive, and around 30% of its tax from VAT. This regressive nature of taxation means that the poor pays the same effective tax rate like the rich which he believes has worsen the plight of the poor and vulnerable.

Mr. Adomako urged the government to explore and deepen its effort in raising more revenue from progressive taxes.

He was emphatic that economic inequality is on the increase in Ghana, which is also impacting on the fight to reduce extreme poverty. Large parts of the Ghanaian population remain locked out of the gains from growth. This is compounded by large inequalities which also exist within Ghana based on region and rurality. It is crucial that government works to address this spiralling inequality.

Launching the advocacy campaign on Fiscal Policies to Address in Equalities, Mr. Appiah Adomako said taxation is a matter of taking money and redistributing it across the country. That is tax and spend is the duty of every government. If when done properly, it reduces inequalities. A good tax system is progressive.

Presenting the highlights of research done by CUTS partners-Oxfam in Ghana, Mr. Adomako indicated that tax exemptions and deductions to multinational firms in Ghana amount to an average of US$1.3 billion year which year represents two-thirds of the education budget and 80% of the health budget. He added that the country is haemorrhaging millions of dollars annually from tax agreement with some countries.

He stated that “on the issue of tax treaties. Ghana has signed treaties with 12 countries These set low rates for the taxes Ghana can deduct up front from companies headquartered in these countries before they can start shifting profits out of Ghana, and therefore reduce Ghana’s tax revenue. However, they have had less effect on reducing tax revenue than in other countries, because Ghana has set very low withholding tax rates (between 8% and 20%) which are generally similar to the ceilings in the treaties (ie Ghana has deprived itself of withholding taxes).

A research associates at CUTS Ghana, Mr. Isaac Yaw Obeng said the study estimates that “two-thirds of the overall inequality reduction is accounted for by spending on education and health: spending on education is the most inequality-reducing (accounting for around two-thirds of the reduction in Gini from government spending), partly because Ghana spends a high share of its education budget on pre-primary, primary and junior secondary schooling, which benefit lower-income groups”.

He added that though the education sector budget has increased by 11% from GH¢ 8.33 billion in 2017 to GH¢ 9.26 billion in 2018. However, much of the increment went into the payment of compensation compared to goods and services and capital expenditure. The share of allocation to compensation increased significantly from 91.4% in 2017 to 98.5% in 2018. Investment in teaching and learning infrastructure holds the key in narrowing the inequality gap.

On the areas of health, Mr. Yaw Obeng said “given that health and education account for two-thirds of the reduction in inequality as a result of social spending, it is absolutely vital that any reductions in health spending are reversed, and greater allocations help scale up access for the poorest, and ultimately move towards universal health care. Moreover, the existing health budget needs to work better addressing inequality and to increase inefficiencies in the system. Increased funding to the NHIS to reduce out of pocket expenses on healthcare of the poor whose healthcare needs rest on the scheme”.

Programmes Officer at CUTS Ghana, Hilary Luna Enos-Edu urged government to free up funds for anti-inequality spending by: reducing the debt service burden and make revenue mobilisation a top priority. She urged on the metropolitan, municipal and district assemblies to maximize revenue from property rates to support education, healthcare and sanitation and not to overly rely on the central government for all their needs.

Ms. Enos-Edu asked government to clamp down on tax exemptions, and enhance domestic revenue mobilization with a strong emphasis on progressive taxation which helps to redistribute income and do more to address geographical inequalities through better constructed financing formulae, to overcome continuing urban-rural and North-South divides.

CUTS Ghana is a public policy think-tank working in the areas of trade and development, competition and economic regulations, and governance and consumer protection across Asia and Sub- Saharan Africa. Established in 1983 and with its headquarters in Jaipur, India, the organisation has its regional presence in Accra, Nairobi, Lusaka, Geneva and Hanoi. Oxfam in Ghana is supporting this CUTS Ghana initiative.