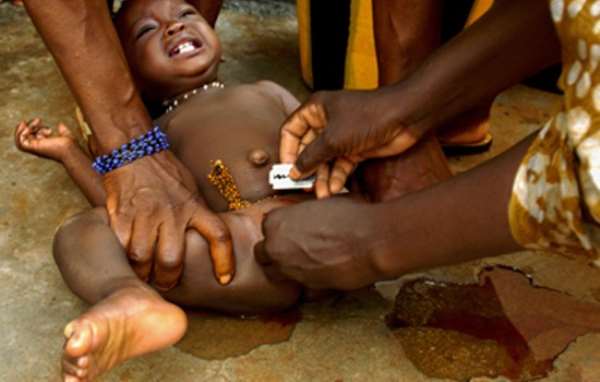 Violence against women and girls remain one of the most widespread, persistent and devastating human rights violations in our world today.

It is the partial or total removal of the female external genitalia – mostly clitoris, labia, and the urethral and vaginal openings.

It is typically common in traditional group or community cultures with patriarchal social structures.

There are huge pressures on families and communities to ensure daughters have FGM and many people victims have FGM forced on them and have no choice whether it happens.

Some communities have strong and deeply held beliefs that FGM is a good and necessary thing for girls to go through.

In Brong-Ahafo for instance, FGM is common in the Banda and Tain Districts of the Region, where Muslim population is dominance.

Though the practice has witness sharp and drastic decline in the region due to intensify public education, few cases are being reported.

Perpetrators, mostly over-aged women (70 years and above) including relatives of victims, revered and clandestinely perform the rite to safeguard tradition and culture.

They belief FGM as a good tradition, religious requirement, or a necessary rite of passage to womanhood as it ensure cleanliness or better marriage prospects.

But whatever reasons people may assign to the practice, FGM remains unlawful in the country, and required concerted efforts to bring it under control.

The Ghana News Agency (GNA) investigations show that most girls undergo FGM when they are below seven years in the name of tradition, sexuality and fertility as well as religion and belief.

However, the practice seems to be recurring in earlier ages because parents want to reduce the physical and emotional trauma of their children.

Undeniably FGM happens to women and to girls in adolescence, childhood and even sometimes when she is a baby.

It is seen by some as a condition of marriage whilst others believe that vaginas need to be cut and so victims will be unclean or unworthy if they don't have FGM.

These beliefs are very strong and parents genuinely think that they are doing the right thing for their daughters.

In communities where all women have FGM, and all girls are expected to have it, FGM can seem normal.

It’s sad that FGM seems like there is no other choice, as is very difficult for girls to challenge these traditions in local communities.

FGM does not have any sexual benefits but in fact damages or removes sexually sensitive skin and can make sexual intercourse painful, difficult and even impossible without re-cutting the entrance to the vagina.

In-fact, FGM has left indelible scares on many unsuspecting women.

In many circumstances FGM has made relationships difficult for victims, and stops couples enjoying a good sex life together.

FGM is not also recommended by any religion or in any religious texts. In-fact it is not a condition of belonging to any faith group.

Christianity, Judaism and Islam unanimously agree that “your body is a temple of God” and so therefore the practice of FGM remains a harmful custom that is not advocated in any holy script.