Ellen Johnson Sirleaf As Recipient Of The 2017 Mo Ibrahim Prize: A Complete Mockery To The Suffering People Of Liberia 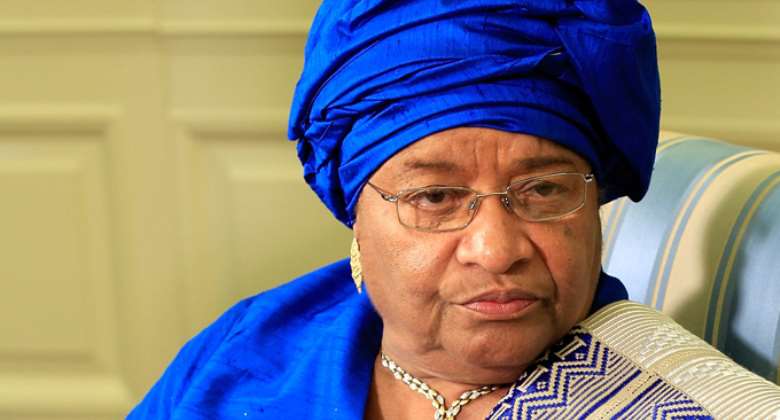 Mockery has once again been made of the suffering people of Liberia. Their quest to bring to justice those who contributed immensely to a 12year of misrule, entrenched corruption, political patronage, chronic nepotism and etc. has been further consigned to the trash pile of history. If the awarding of the 2017 Mo Ibrahim Prize for Achievement in African Leadership to Former President Ellen Johnson Sirleaf does not point to such direction, I do not know what it is.

It is a mockery to Liberians because no organization which is concerned about good governance, excellence in public service, and human decency will give an award to a person who was tasked and given all of the support to transform a country blessed with multiplicity of natural resources, but squandered the opportunity and massively plundered the republic. No organization which has a very objective understanding of the state of the Liberian society under Ellen Johnson Sirleaf’s 12year rule will give her an award meant to celebrate excellence in public service. It is a shame that the gory details outlined about Liberia in global indices could not preclude the MO Ibrahim Foundation from handling the award to Former President Sirleaf.

Furthermore, this reveals the agony of capitalism in its crudest form—that once you are well-connected to the global hegemony—you can frustrate the efforts of your people but still be regarded as an iconic figure in the world. It is this dastard worldview that has made puppet leaders to not focus more on the things that matter to their people, but what matters to the global hegemony. This is the reason why some leaders, especially in Africa, take pleasure in violating their constitutions, but make meeting the triggers of the Bretton Woods Intuitions major priority.

There is no wonder why we speak and write so passionately against this system that works at the disadvantage of majority poor and at the advantage of a minority elite clique that makes up the ruling class. Negating the general outlook of the citizenry in Liberia, the Mo Ibrahim Foundation took a Prize with a reward of 5Million and gave to a woman only because she served her constitutional terms and gave way for a smooth democratic transition. This is a slap in the face of over 3million Liberians who were subjected to rigid poverty, prevalent diseases and acute ignorance under the 12years of mis-governance of Madam Ellen Johnson Sirleaf.

I don’t want to give credence to the foundation’s argument that “Ms. Sirleaf developed her country, strengthened democracy and human rights for the share benefits of her people and advanced sustainable development.” This is because, had the awarding of the Prize been honestly foundation on the mentioned pillars, Ellen Johnson Sirleaf merits not the award but should rather be answering questions about how her 12 years of stewardship over the vast mineral and natural resources of Liberia were overshadowed by corruption, bad governance, nepotism, patronage, etc.

So is the Mo Ibrahim Foundation telling Africans that no matter how an African president left the objective condition of his/her country and people, once such president, under a bourgeois democracy, served his/her constitutional tenure and did not follow other African leaders who have monopolized political power but are doing well in providing economic rights for their people, such African leader deserves a hooping 5Million reward? This is not only absurd but also a further proof of how this false global aristocracy along with its bankrupt socioeconomic order does not have the determination to reward any black person who has worked diligently for the advancement of the black race and the African continent.

Furthermore, global awards such as the Mo Ibrahim and the Nobel Prize are dwindling in significance because decision as to the winner of the award is not based on the objective analysis of the awardee’s actions or inactions, but it is primarily influenced by sustained Public relations promos and massive lobbying done by PR firms on behalf of the nominees. Such an unhealthy exercise, over the years, has made the awards to lost significance, and this is the sad fate that has come to haunt the Mo Ibrahim Award.

Is the Mo Ibrahim Foundation aware that despite Ellen Johnson Sirleaf serving her constitutional tenure and giving way to a democratic transition, the vast majority of Liberians was and is still victim of economic deprivation, inevitable poverty, endemic corruption, political patronage, nepotism, corruption and etc.? Honestly, I am of the conviction that the Mo Ibrahim Foundation has no modicum of respect for the people of Liberia. The foundation has only rewarded Madam Sirleaf for leaving Liberia as the 4th poorest country in the world with a GDP per capital of US$ 882.00 (IMF 2017 Report). Ms. Sirleaf has walked away with a clean 5Million for leaving Liberia as the 177th country with “People who are unable to reach their full potential in life because they suffer deprivations in multiple dimensions of human development” (UNDP 2016 Human Development Index).

This Prize, as was given to Madam Sirleaf, is a clear indication that she is being applauded or celebrated internationally for leaving Liberia as the country with the highest ratio of number of children that lack access to primary education globally, despite the enormous mineral and natural resources the country has at its disposal. (UNICEF’s 2016 Report). If the prize given to President Sirleaf is not a clear demonstration that Liberia deserves being, according to the WHO, one of Sub-Sahara countries with a very high infant and maternal mortality rates on a world scale, indicating that the country’s health sector is miserable, then I don’t know what it is.

The prize, as was awarded to Former President Ellen Johnson Sirleaf, is simply a thank you treat for her government passing into laws over 68 Concession agreements that predominantly work at the detriment of the Liberian people. According to a 2012 Mo Stevens’ Audit Report, out of Sixty-eight (68) concession agreements signed between multinational corporations and the government of Liberia headed by the recipient of the 2017 Mo Ibrahim Prize, only two of the agreements met the standards of international best practice.

Sixty – six of the agreements were signed into laws through bogus negotiations that negated Liberian laws and gave away the country’s natural and mineral resources to foreign monopoly capital in exchange of paltry sum in taxes and rents which were inadequate to address the structural imbalances in the Liberian economy. I guess this is one of the transformative leadership attributes that Madam Ellen possesses for which she has been awarded by the Mo Ibrahim Foundation.

While Liberians are still shackled by poverty, disease and ignorance, Ellen Johnson Sirleaf, a woman who was entrusted with 12years to overturn the country’s misfortune but dashed the people’s hope in the garbage bin of history, has been awarded by the Mo Ibrahim with a price tag of US$ 5million. This will forever remain a scar in the conscience of Liberians. This mockery that has been made of the people of Liberia will be written and posterity will realize that there was a time in their nation’s history wherein the addressing of the agony and misery of humanity was negated and those who contributed immensely to humankind’s devastation were canonized. This is humanity hanging on a hot cross of iron.

Ya-Na commiserates with Mahama
46 minutes ago