Autism. All You Need To Know About Autism 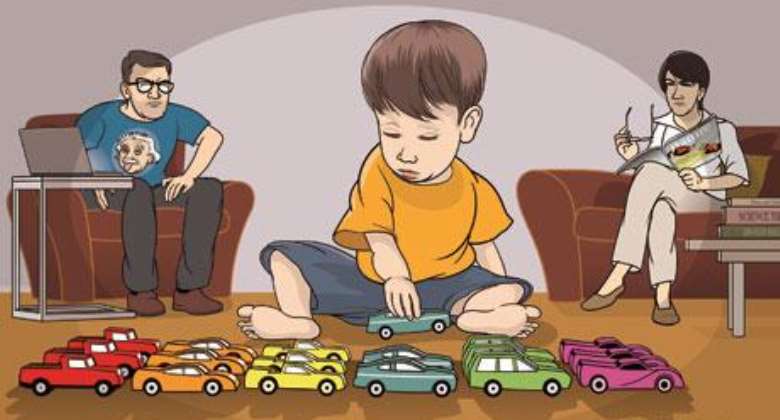 About 1% of Adults have Autism.
Autism is much more common in boys than in girls, with a male: female ratio of 4:1

Autism is a developmental disorder in which affected persons have problems with their emotions and behaviors, as well as delays in their social and communication skills.

Most people with autism, appear normal, except that, they behave, act and react differently.

I remember, in the middle of last year, (2017), GBC TV was showing documentary on children with autism in Ghana, and (wrongly), portrayed kids who had features, mainly, of Down's syndrome, as children with Autism. Children with autism, almost always, look normal, with no gross dysmorphic features.

We all grew up along with kids who may have had autism, but they were not detected, due to lack of awareness. During those days, some of these kids were either left behind in class, or they discontinued schooling.

Individuals with autism, show a broad spectrum of abilities and functional disabilities in the following areas:

Cognition: cognitive development may range from profound intellectual disability to above average intelligence

Behavior: Abnormal behaviors include no social smile, no eye contact and no response to own name, and attention deficiency. These abnormal behaviors facilitate early diagnosis of Autism in infancy

Autism in general, is a lifelong disability.
Early Signs and Symptoms (before age 3 years)

No response to name
Loss of language and social skills
Poor eye contact
Excessive lining up of toys or objects
No smiling or social responsiveness
Late indicators (after age 3 years)
Impaired ability to make friends with peers
Absence or impairment of imaginative and social play.

Stereotyped, repetitive, or unusual use of language

Restricted patterns of interest that are abnormal in intensity or focus.

CLINICAL PRESENTATION
Developmental regression:
Some kids with autism, appear to be developing normal until age 15-30 months, when they begin to lose verbal and non-verbal communication skills.

Pointing at object with index finger:
Toddlers learn to use their index finger to point objects of their concern to others. Children with autism fail to point at objects with the finger. The absence of finger pointing behavior, is specific for autism.

Abnormal reaction to environmental stimuli.
Another behavior, specific for autism, is that, they react to sensory stimulation, differently. Loud TV sound, automobile horn, sound from motor bikes and vacuum cleaners, etc. irritate them. And so, does exposure to bright light. They do not like being touched. These stimuli may result in child screaming uncontrollably.

Social interaction:
Autistic children have no eye to eye contacts.
They do not smile back, they may have no facial expression and may not wave back to a "good bye"

Autistic children prefer to play alone. They appear to have no feelings for other kids. They may be more interested in other objects than in people. Even though, kids with autism might want friendship with others, their action towards these potential friends, drive them away. Autistic teens and adults are usually lonely.

They are, however, irritated by loud noise from TV and radios

LANGUAGE DISORDERS.
Problems with language include speech delay and language deviations like using "You" for "I".

They have the tendency to repeat the words and phrases, (they've just) heard from others.

They also speak unclear words, that they alone understand.

CHILD PLAY .
Children with autism, are unable to grasp the basic symbolic play (pretending to be someone else or a toy has human characteristics, etc.) They usually play with objects and toys in one way. The child may line up toys in the same order, over and over again.

MOTOR ACTIVITIES
Children with autism, never remain still. They are always on the move. The only time they become quieter, is when they are sick. They resume their odd behaviors after recovery from illness.

Some of their abnormal motor activity include:
Flapping of their hands, especially when excited.
Bouncing (jumping up and down)
Turning around
Motor tics are also common.
SELF INJURIOUS BEHAVIORS. These include:
Picking at their skin.
Self-biting.
Head punching and slapping.
Body punching and slapping
Poking the eye
Lip chewing
Enlisted below are other abnormal characters associated with Autism

Social issues
Avoids eye to eye contact
Prefers to be alone,
Does not want to be held or cuddled
Fails to respond to name, or appears not to hear you.

Does not share interest with others
Has flat facial expression
Cannot initiate a conversation or keep one going.
Has trouble understanding other people's feeling or talking about own feeling

Communication issues
Delayed speech and language skills.
Repeat words or phrases over and over.
Reverses pronouns (e.g. 'You' for 'I')

Uses few or no gestures (e.g., does not wave goodbye)

Does not understand jokes, sarcasm, or teasing.
Talks like a robot, or in a sing song voice.
Behavioral issues
Performs repetitious movements such as rocking, spinning in circles or hand flapping

Performs activities that could cause self-harm, such as biting, head-banging

They lack imitation and symbolic play skills, so, they do not engage in imitative or make-believe play

Unusually sensitive to light, sound and touch, yet may be indifferent to pain or temperature

OTHER PROBLEMS THAT COEXIST WITH AUTISM
Developmental delay in walking, grasping and handling objects.

Toilet training difficulties, especially those with constipation and chronic diarrhea.

Epilepsy, especially in those with abnormal features and motor mannerisms.

Sleep difficulties: Most Can't sleep, or sleep for long, and they may always get up to play at night.

BEHAVIORAL PROBLEMS IN AUTISM both Kids and Adults
Pica (ingesting inedible and harmful objects including paper, rocks, soil) which can lead to injuries and death

Elopement and wandering away from secured areas.

About 50% of persons with autism exhibit Elopement and Wandering away from home, schools and other secured areas and go to environments where there could be at risk of potential dangers..

Safety Concerns.
People with ASD are at increased risk for a lot of safety concerns. They have inattention, impulsivity, Hyperactivity. These include

. Elopement
. Drowning
. Suffocation
. Injuries from burns, falls,
. Ingestion of harmful substances
ETIOLOGY OF AUTISM.
Autism has no known single biologic cause. Genes play a role, and so, do environmental factors during and after pregnancy.

RISK FACTORS FOR AUTISM
Low birth weight, those with birth weight less than 2Kg, have 5% chance of being autistic.

Children born to male parents, aged 50 and over, have a higher incidence of autism, compared to children whose male parents were younger than 30 years.

Children conceived within 18months after their Mom's previous birth are more likely to have autism.

There is no credible evidence supporting the theory that vaccines like MMR (measles, mumps, rubella) vaccine cause ASD.

Several medical and genetic conditions have been associated with autism

DIAGNOSIS OF AUTISM :
Diagnosis of Autism involves a 2-step approach
Step 1. Specific Autism Developmental screening is done for all children at age 18-month, and 24-months

M-CHAT (Modified Checklist for Autism in Toddlers) is the most widely used screening tool.

All children must be screened for ASD during the regular well child visits at 18 and 24 months.

Step 2. Those suspected to have ASD, are then, referred to developmental specialist, Psychologists and Neurologists, for further evaluation.

Physicians will do screening and refer people with Autism to developmental specialist.

. Lack of babbling by 12months, Single words by 18 months, or phrases by 24 months

. An inability to follow simple instructions or imitate others by 12 months

. A lack of pointing out objects of interest by 18 months.

. An inability to direct the child's attention or lack of response to name by 18 months

. Little interest in other children by 24 months of age

Those confirmed as having Autism are considered for rehabilitation and placement.

PROGNOSIS OF AUTISM
Prognosis depends on the functional cognitive level (IQ) of persons with Autism.

High functioning adults with autism have successful careers in fields like music, and Arts. They hold their jobs successfully, and even marry and have children.

Others are working part-time
Low functioning autistics may never live independently, they may need home or residential care for the rest of their lives

Almost 30% of autistic adults are non-verbal, and a similar percentage show aggression towards others.

MANAGEMENT OF AUTISM,
Autistic children should be placed in specialized programs as soon as the diagnosis is suspected

MEDICATIONS:
Antipsychotic Medications include Risperidone are given for psychotic symptoms

Stimulants including methylphenidate.
For further reading, and to check developmental milestones for children, here are the links to the USA, CDC Websites: