Climate Change, Unplanned Urbanization And Air Pollution Can Fail Us In Beating NCDs 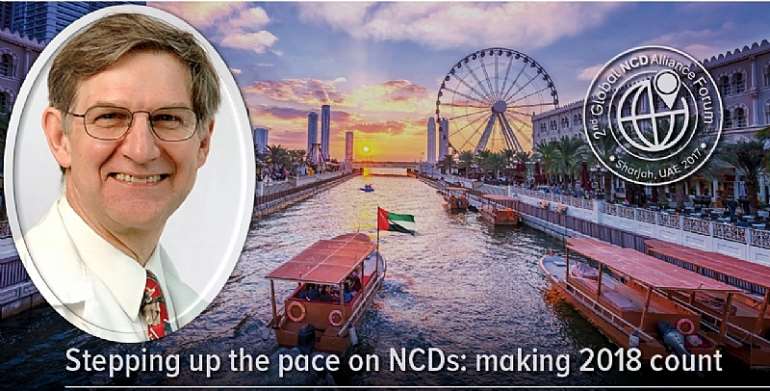 Non-communicable diseases (NCDs), mostly cardiovascular diseases, cancers, diabetes, and lung diseases, account for over two-thirds of world's deaths each year. "Of these, the lung diseases are the least recognized" said Dr Dean Schraufnagel, Executive Director, Forum of International Respiratory Societies (FIRS), who was among the key experts at the 2nd Global NCD Alliance Forum in Sharjah, United Arab Emirates (UAE).

Apart from scaling up care for NCDs, it is equally important to reduce exposure to risk factors. Climate change, unplanned urbanization and air pollution are among the major risk factors for some respiratory NCDs.

SOME OF THE NON-COMMUNICABLE RESPIRATORY DISEASES INCLUDE:

- Chronic Obstructive Pulmonary Disease (COPD): More than 65 million people suffer from it and 3 million die from it each year;

- Asthma: About 334 million people suffer from it. It is the most common chronic disease of childhood affecting 14% of children globally and its prevalence in children is rising;

- Pneumonia: Leading cause of death in children under 5 and kills about 4 million people annually;

- Lung cancer: Most common lethal neoplasm in the world, it takes away 1.6 million lives each year;

- Sleep apnoea: More than 100 million people suffer from sleep-disordered breathing. 80% of the cases go undiagnosed and its broad health effects are just being discovered;

- Pulmonary hypertension: It occurs in 1% of the world’s population. 10% of those over 65 years of age suffer from it and most goes untreated.

In an exclusive interview given to CNS (Citizen News Service: www.citizen-news.org) Managing Editor Shobha Shukla on the sidelines of the 2nd Global NCD Alliance Forum, Dr Dean Schraufnagel who heads FIRS, stressed upon the fact that both climate change and unplanned urbanization lead to air pollution, which is one of the main causes of non-communicable respiratory diseases.

Dr Dean Schraufnagel is a Professor in the Departments of Medicine and Pathology at the University of Illinois at Chicago in USA. He has earlier served on board of directors of American Thoracic Society, as well as American Lung Association; and received the American Thoracic Society Presidential Commendation and PAR-Excellence Award. He has also been an expert with the International Union Against Tuberculosis and Lung Disease (The Union).

Dr Schraufnagel said that unplanned urbanization and climate change are often associated with air pollution and pollution is associated with both chronic and acute diseases. Global warming results in the production of several air pollutants like methane, hydro chlorocarbons, carbon dioxide; while fire causes particulate matter, nitrogen oxides, ozone and sulphur oxides. But coal produces all of these elements and to some extent exhausts from cars too.

"People with any kind of chronic lung disease suffer when air quality changes. NCDs that lie in the respiratory sphere are greatly affected by climate change. Asthma is associated with pollen, which are climate affected. There is recorded evidence to show that asthma symptoms increase after a thunderstorm - the two are directly related. COPDs too are very susceptible to temperature and air pollution. There is a very detailed combination of air pollution and respiratory infections. For example PM10 - the large particulate matter, is associated with increase in RSV virus (Respiratory Syncytial Virus), bacterial pneumonia, and viral influenza."

Dr Schraufnagel lamented that the elderly and the new born children are the most vulnerable. The particulate matter, especially the fine particulate matter PM 2.5, gets into the blood vessels and spreads throughout the body. If you were to measure the emergency room admissions, especially for COPD in the elderly you would find that there is a good correlation between the amount of PM 2.5 and these events. Air pollution also results in an increase in cardiac deaths, and has even been associated with dementia and renal disease. Foetal exposure to tobacco cigarette smoke results in lower birth weight and could also lead to obstructive bronchitis as the baby grows up.

According to Dr Schraufnagel, apart from climate change, the two main causes of outdoor air pollution are exhaust fumes from cars, and power plants. He advised that governments should:

- encourage use of electric cars that do not pollute,

- modify existing power plants, switching to materials other than coal,

He gave the example of USA where two things got people interested in electric cars: the fuel prices increased and the government gave subsidy for electric cars. Listing the benefits of electric cars from personal experience, Dr Schraufnagel said that they not only prevent air pollution, but also run without much cost for fuel and there is much less servicing to be done too.

USE EVERY OPPORTUNITY TO DIAGNOSE RESPIRATORY NCDs

TB increase risk for chronic obstructive lung disease too and vice versa. Having prior diagnosis of TB increases risk of chronic obstructive pulmonary disease (COPD) by 2.5 times. In addition a study is going on currently in Malawi which shows 25% of cured TB patient had some lung abnormality after 1 year of completion of treatment. Integration of care for TB is a logical strategy which will benefit patients as well as the health system.

A recent first-ever study documenting the prevalence of chronic respiratory symptoms in rural Malawi has found that nearly 25% of the participants reported symptoms suggestive of non-communicable chronic respiratory diseases, but there was lack of diagnosis as well as lack of treatment options. The findings reflect the challenges faced by primary healthcare systems in developing countries with respect to the management of asthma, COPD and other chronic respiratory diseases, said one of the key researchers at the 2nd Global NCD Alliance Forum held in Sharjah, United Arab Emirates (UAE).

Dr Schraufnagel elaborated that, "FIRS organizations are well equipped to educate physicians, and train and mobilize healthcare workers to reduce NCDs. Healthcare workers - community healthcare workers, nurses, physicians, and other allied healthcare professionals - are a critical element in NCD control and if they are knowledgeable enough to follow standardized pattern for NCD treatment and care then a lot can be achieved. This is one thing which FIRS societies do. FIRS actively advocates for reducing the burden of respiratory diseases. Our first goal is to bring this to the attention of all - general populations as well as governments and decision makers. We try to get all countries to develop standards for treatment of all respiratory diseases. Working together with WHO and legislators, we also want to reduce tobacco use and improve air quality, because tobacco and poor air quality cause many diseases."

But one has to be more than just aware, feels Dr Schraufnagel. "We have to be outraged and demand that it is our right to breath clean air. Unless we demand nothing would change. Twenty years ago you could smoke in hospitals and other public places and nobody would raise an eyebrow. But today, knowing the devastating effects of tobacco smoke, it is no longer acceptable to smoke in a public place, in most parts of the world. Same is true about air pollution. Staying indoors to avoid air pollution is not the solution. People have to make a noise about not being able to breathe clean air, and force governments to take action. We have to get legislators to go after pollution and the polluters."

(Shobha Shukla is the Managing Editor of CNS (Citizen News Service) and has written consistently on health and gender justice for several years. With support from the Lilly Global Health Partnership this article is part of her in-depth thematic coverage of the 2nd Global NCD Forum. Follow her on Twitter @Shobha1Shukla or visit www.citizen-news.org)

CJ Order Courts To Sit On Holidays, Weekends On Cases Involv...
6 hours ago