Are We Going Or We Are Coming; Gay, Homosexuals, Lesbians And A President's Confusing Stance 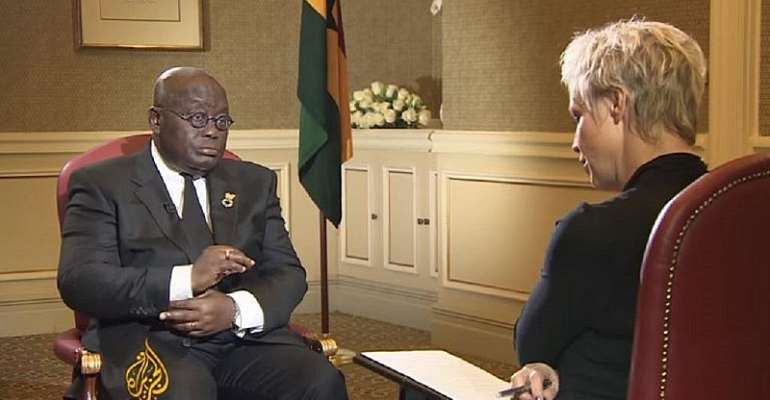 Ndoo, when you see a toad running in broad daylight, you better understand that something is after its life. This week I have had the chance to glance over the response of his Excellency, Nana Akuffo Addo on a question posed to him by a journalist of the Aljazeera news network regarding gay or homosexuals in Ghana. From the demeanor of his Excellency, you could see that all was not well with his philosophy on homosexuality and whether it could be legalized or not. He lacked the usual confidence of providing clear-cut answers to questions. What even made it more stunning was his assertion that we don't accept that per our laws and yet turned around to literally motivate the gay community in Ghana to pile pressure on our legislatures so as for the law to be changed. As usual of you and I, Ndoo, we all made our two-by-four deductions from his response.

Going forward, was that response, that demeanor necessary? In fact the President's utterance made me to remember a real life story about an errant boy and his morally weak father grandmother used to tell us before here departure to eternity.

The story goes that there was this boy who fancied taking the belongings of his play mates as child. Anytime there was a report of the boys bad behavior to his father, the father would try to make reason out of it. Today he would say "oooh but maybe the other boy once took his toy too". The next day " you see eerrh, my boy might have joked with your son, don't take it personal". This father never saw the need to point out that the act was morally unacceptable in our part of the world. Instead he gave the boy "reasons" to justify his actions. The end results was that the boy graduated to a life- threatening armed robber. The last time I asked Grandma about him, she told me he was arrested for murder in Accra, Nima.

Now what similarity do you see in our President's demeanor and the father in this story? The two all gave their errant sons reasons to act in a what is considered immoral in Ghana. In doing this the President, who is always touted as being smart, tried to confuse those of us against this homosexuality thing and subtly gave hope to his errant LGBT maniacs (Remember we are all his sons?). He underscored the fact that the LGBT in Ghana needed to push harder for it to be legalized our Ghana like Britain and other countries. He is the father figure who tries to reason with his errant sons without rebuking them. So when the chief of our village barber his hair in an American style, what would you expect of the youth in the village?

Whiles these politically indoctrinated and drunk party communicators would bite through iron rods to defend the president, I see it as a face-saving and shameless attempt. What we all should be doing is trying to point out the lapse in our president's opinion and our moral codings. We all can remember when President Bukhari of Nigeria was asked about this gay issue. His answer was a straight no! The late Atta Mills own was a big "NO". The recently defeated Ex-President JM's answer too was a no. What happened to our president? Are there really some LGBT adherents at the seat of government? Or who is putting this distasteful act on our dinner table for which if we refuse we might go hungry?

I just find it quite unfathomable that reasonable people like Kofi Bentil and others would ask us not to worry about what two adults do in a bedroom. Yes, we may not worry about these homosexuals yet we would lose sleep when they come announcing to us what they do in the bedroom. A song becomes distasteful to a monkey when it hears the bark of dogs in it. To wit, we can now hear the adults telling us to allow them influence us and our children.

This is not a matter of " distin or that thing" as Lawyer Nti of the popular TV series, KejetiavrsMakola would put it. This is a matter of our survival as humans and the continuation of our race. Yes we may not have good roads. yes we don't have clinics. Yes our maternal mortality is on the rise. Yes we don't have good schools. But sorry, Mr Researcher and his ilk, our common sense tells us that survival first before anything. Who should give birth to a boy for you to pick him as your gay partner? Homosexuality is a threat on our existence.

To this end, our president must define his parameters very well. He must come clear on what he meant by "it is bound to happen". No foreigner can unduly coerce us to agree to it by giving us " toffee" as bribes. And even those gay boys in Ghana must know that they should remain in hiding forever and not be lulled into a fantasy novel where their gay practices would be given life by the majority of us who abhor it. And to those politicians who sought to put us in a state of "going or coming", I say " we dey see you from afar". The higher the monkey climbs a tree, the more its anus and buttocks become visible, the Dagombas are wont to say.