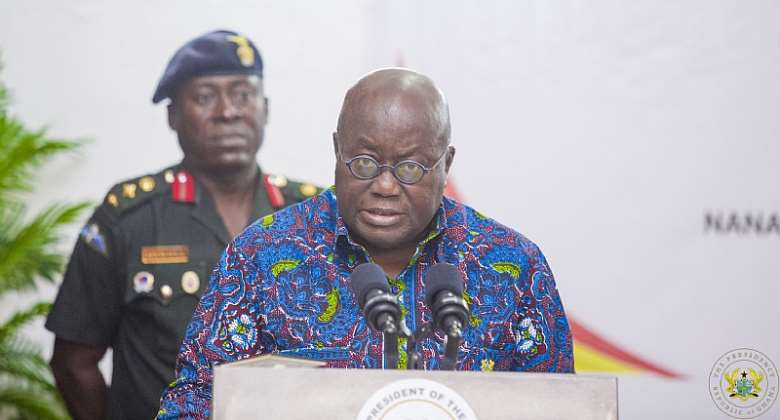 President Akufo-Addo has charged persons living in Ghana to make it a duty to stop illegal mining and felling of trees in the country.

According to the President, “What we make of our natural resources would determine our existence.

“I call on all gathered here, and every Ghanaian, to rise up to the occasion. Farmers and local community members should not allow illegal logging and mining to continue. Security agencies on our roads, ports and borders should not look on unconcerned and allow illegal timber products just to pass without confiscation or with corrupt purpose. Most importantly, the Forestry Commission should strengthen its law enforcement measures to curb illegal logging, mining and unsustainable harvesting of forest products,” he stated at the second national Reduce Emissions from Deforestation and Forest Degradation (REDD+) forum in Accra on Thursday under the theme, 'Strengthening law enforcement for effective REDD+ implementation.'

That, he said, was because the fight against deforestation and forest degradation is critical to Ghana's efforts at tackling the issue of climate change.

With climate change being, perhaps, the biggest threat to the achievement of the Sustainable Development Goals, President Akufo-Addo, noted that it's fast becoming a developmental issue of grave concern to most leaders across the world.

He, however, revealed that “Ghana is currently developing another sub-national REDD+ programme in the Upper West, Upper East and Northern Regions of Ghana, with the support of the Italian Government through the United Nations Development Programme, for submission to the Green Climate Fund.”

According to the president, the programme has the potential to transform the northern savanna ecosystem of Ghana with the right implementation and enforcement structures.

He indicated that signatories to the United Nations Framework Convention on Climate Change (UNFCCC) have initiated the process of reducing considerably greenhouse gas emissions from deforestation and forest degradation and also encouraging tree planting.

He reiterated his government's commitment to take action that prevents forest degradation and deforestation which would increase the country's forest cover.

“Our fight against the illegal mining phenomenon, also known as galamsey, is a case in point. In the 2016 manifesto of my party, the New Patriotic Party (NPP), indicated strongly our commitment to reforestation, forest rehabilitation and forest protection activities, realizing that forest cover has been depleted significantly in the last two decades,” President Akufo-Addo said.

To that end, he noted “we intend to undertake massive forest plantations, with both indigenous and exotic tree species, and also develop the bamboo and rattan industry, as they would serve as effective substitutes for furniture and other wood products.”

President Akufo-Addo told students of Ghana that “I urge you to inculcate the habit of tree planting and conservation. As you do this, you begin to build a generation that is more sensitive to issues of environmental conservation.”

“To media houses and other civil society actors, your work on advocacy is critical to keep all of us on our toes. Do not relent in your efforts, and deepen even further your knowledge on environmental issues and their reporting, and to the Chief Justice and members of the Judiciary, let us ensure that the fines and punishments that are pronounced on perpetrators of illegal forest activities are deterrent enough, and quickly delivered and effected.”

“We appreciate your efforts and we will continue to ask for your support and that of others, as we move forward with REDD+ implementation in Ghana, he told representatives of the Diplomatic Corps.

On his part, Chief Executive Officer (CEO) of the Forestry Commission, Kwadwo Owusu-Afriyie, called on Ghanaians at every level of the social strata to contribute their quota in stemming and reversing the high level of deforestation in the country and renew their commitment to protecting the environment for the benefit of present and future generation of Ghanaians and the global community.

“Let us all join hands to save and grow our forest,” he said.