Sarah Adwoa Safo, Where Is Your Integrity? 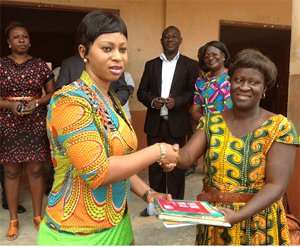 Politicians are perceived to be liars. They are presumed to lie to us in and out of power. Some lie convincingly, others crudely. They even lie pointlessly at times. Adwoa Safo’s lie is a good example of a pointless lie. It is as needless as it is disgraceful. What is her reason for lying about the school building? It appears to be for something beyond political expediency. And the brazen manner in which she publicly lied must worry everyone concerned about the integrity of our leaders.

Zweledinga Pallo Jordan was a South African anti-apartheid activist and astute politician. Cerebral and well-read, he discussed complex economic issues with facility. As an MP, his contributions in parliament were insightful and profound.

He was revered for his intellect and high moral standing. No one who ever heard him speak about the South African economy and economics in general doubted that he had a doctorate degree. His views and opinions on a wide spectrum of areas -economic, political, social and historical- were so deeply informed and illuminating that he must have had a degree higher than a doctorate. But one journalist doubted him. Eventually, he uncovered that Dr Jordan had no doctorate degree. He didn’t even have a university degree!

When this came to light, Mr Jordan resigned as an MP and also as a member of the African National Congress(ANC) even though there were extenuating circumstances: the doctorate title had been thrust on him and his wealth of knowledge was worth a doctorate if not more.. . Whatever the case, he had lied to the world by accepting something he did not earn, so his resignation was most honorable.

Adwoa Safo must follow Jordan’s example. She should resign. She has lied to us. She lied shamelessly and publicly. And by lying to us in this manner, she has made her moral character questionable. If procurement malpractices are our problem, a mendacious minister cannot be our solution. The minister appointed to clean our mess in procurement must be untainted, must have unquestionable integrity.

We must not pander to the sub-standard standards we have set for ourselves. It must not be that “all politicians lie” so the backlash on social media must be enough. It cannot be enough, it should not be enough. All politicians don’t lie. And anybody who has evidence of any politician lying and has been quiet about it is a liability to us. If we justify the lies of our politicians, we should also justify their stealing our resources.

People defile girls every now and then but that is no justification for one to defile girls and expect to go scot-free went caught. But I go far. If a politician is caught lying to us in the face, how sure can we be that that politician will not engage in dishonest and corrupt deeds?

Adwoa Safo has put her integrity in doubt and must resign or at least be sacked. But another scandal may soon attract our attention and she will stay and even get promoted.Whatever the case, Ghana is still my country and I love her.