We continue from Part 1 (Note: In New York, this author sat in a class with a Guinean/Senegalese/Sierra Leonean young lady who vigorously and unabashedly defended female genital mutilation. She later confided in this author that she had one herself and will defend it until her last breath. She even said she will approve it for her daughters any day, any time):

PLAN FOR CHANGE
Once the air is cleared of intellectual confusion adulterating the FGM debates, the way is paved to present the analyses of workable strategies to educate and monitor countries where the practice still occurs.

This should be realized via the able instrumentality of the World Health Organization in conjunction with power brokers in FGM-prone countries to minimize or eliminate many of the problems we have discussed above.

First, the World Health Organization should issue a call for the active involvement of religious bodies, faith-based organizations, and governments, the international community, parents, community leaders, politicians, local human rights entities, members of the media, and judges to educate the masses to question the putative cultural legitimacy of the practice.

Second, the remedial measures recommended in the paper titled: “Policy: The World Medical Association Statement on Female Genital Mutilation,” as to involving government action in preventing the practice, encouraging public and professional understanding of the harmful effects of FGM, etc., are worthy of emulation by the World Health Organization in conjunction with other relevant parties.

Third, donor countries should attach stringent strings to the grants, loans, and other financial packages given to FGM-prone nations. Among these measures should be the forfeiture of any financial entitlement pending satisfactory clearance by donors.

Also, the World Health Organization and the international community should use the threat of economic sanction to coerce countries identified with FGM to enact appropriate laws conferring a mandatory 20-year prison sentence on conniving biological and surrogate parents, as well as a life term on medical personnel and traditional circumcisers.

Parents who violate the law again after their release from prison should receive a mandatory life sentence without the remotest possibility of parole.

Fourth, the World Health Organizations should team up with the international community of nations and continental organizations to disbar any country identified with FGM from lifetime membership in anticipation of satisfactory clearance from these bodies.

For example, the African Union can disbar countries like Sudan, Somalia, or Kenya, if they continue to tolerate FGM, or the IMF, World Bank, or the United Nations can severe all socio-cultural and financial ties with FGM-prone nations should they fail to abide by FGM-related international laws.

Fifth, powerful nations such as the United States and others in the West should act in concert with the World Health Organization, other international institutions, non-governmental organizations, and the countries identified with FGM to reduce the relatively high incidence of victim death, or even eliminate the harsh consequences from FGM, if the latter goal can be actualized.

In addition, those currently suffering from mutilation effects should receive lifetime post-surgical monitoring and psychological counseling to alleviate further suffering. Clinics could also be set up to help in this regard. Lastly, corrective surgeries could also be relied upon to restore clitoral integrity to victims so as to regenerate sexual gratification prior to victims’ genitalia desecration.

Finally, secret societies created by women in many African countries to foster female genital mutilation need be blacklisted, and then also its members and patrons hunted down, and suspected culprits given stiff penalties. Countries that do not practice FGM can grant political asylum (Ugokwe, 2009).

BENEFITS OF CHANGE
In fact, the first remedial measure has been the precise approach adopted and effectively utilized by UNFPA in some African countries including Eritrea, Egypt, Nigeria, Ethiopia, and Senegal (UNFPA). Ethiopia, for instance, markedly reduced the incidence of FGM (Amandla, 2009).

The second measure can bring about the steady growth of national economies of FGM-prone areas to a virtual standstill―which may in turn directly affect the financial health of these countries―many of whom are already on the verge of financial insolvency. Thus, doctors and traditional circumcisers may not be paid for their services.

The third measure will only serve to deter inveterate violators.

Fourth, in the 90s, when military dictators in Nigeria took over power and quelled political dissidence, other military officers found an effective way to dispose of the tyrants. Likewise, economic embargo on Zimbabwe seems to be taking a serious toll on the strongman Robert Mugabe’s hold on power―he has since agreed to share power with Tsavingrai.

So, sanctions may or may not sometimes work, too (Note: We’ve never supported these sanctions though. Besides, economic sanctions are a bit tricky because they tend also to punish persons and organizations that are dead set against practices such as female genital mutilation. They may punish the targeted culprits and non-culprits alike. We are hereby referring to collateral damage. Finally, sanctions may even push the practice further underground, far away from the institutional oversight of monitoring authorities).

Fifth, giving lifetime post-surgical monitoring and post-psychological counselling to victims can bring about temporary psychological relief―this is preferable to nothing at all. Besides, reconstructive surgery can reinvigorate the sex life of these victims, especially those whose genitalia were partially removed. Finally, organized clinics can provide the environment where relatively healthy surviving victims can come in and share their experiences with those who cannot get over their suffering.

In conclusion, female genital mutilation is truly a controversial subject and an abhorrent practice as this essay makes abundantly clear. Its controversial nature calls for intellectual clarity―an exercise realized by describing what it actually is (see appendix) and by elaborating on an extensive laundry list relating to its harmful medical and psychological consequences, adequately giving a cornucopia of statistical references in order to delineate the gravity of the practice.

We then branched out into a lengthy discussion on the reasons usually cited to support it. Subsequently, this analysis naturally led the way to an exploration of some of the corrective measures that the World Health Organization and others should adopt and use to monitor and educate the masses on the need for change in areas where it is practiced, as well as offer some empirical suggestions as to their feasibility.

Still, we cannot gloss over the fact that education is key to bringing awareness of the dangers of this practice to the doorstep of all.

We should, however, also make it abundantly clear that extirpating female genital mutilation, trokosi, and child marriage from our land and other parts of the world is close to this author’s heart. Let’s come together and make this happen. And we believe the late Madam Efua Dorkenoo will be proud of us.

(Note: See our next article in the series “Efua Dorkenoo & The Unfinished Business of Female Genital Mutilation.”).

APPENDIX
The first and obviously the most indispensable element characterizing any intellectual discussion focusing on the controversy surrounding the subject is the apparent failure to formulate a widely acceptable name pointedly descriptive of the practice yet also completely devoid of subtle ideological nuances.

Nevertheless, for purposes of analytic simplicity, we have chosen to use the term “female genital mutilation” or “FGM” interchangeably throughout this essay?

Now, putting aside the question of the intellectual quandary that one inevitably finds him/herself in when this topic comes up for discussion, let us pose the question: What exactly is female genital mutilation? According to the World Health Organization:

“Female genital mutilation comprises all procedures that involve partial or total removal of the external female genitalia, or other injury to the female genital organs for non-medical reasons.”

“The practice of circumcision of adolescent women in some cultures that generally involves the surgical removal of the clitoris or the sewing up of the vaginal opening.”

It is evident that the second perspective is problematic for two notable reasons: one, female genital mutilation involves infants and not exclusively adolescents as reported above, and, two, if the vagina is sewed up, how does one pass urine, clear up menstrual blood, or deliver a baby without the benefit of an anatomical egress?

Should Cesarean section be the only obvious choice for those confronted with this anatomical and physiological dilemma, even if their personal beliefs frown on this medical procedure?

Nevertheless, there is an element of truth to these assertions as demonstrated above.

Legislation on Female Genital Mutilation in the United States. The Center for Reproductive Rights. www.reproductive rights.org. (or [email protected]). 18 April, 2009. 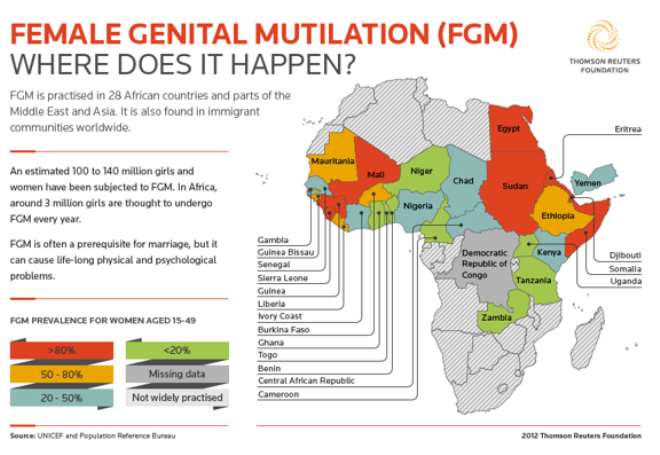