The Need To Clear Our Roads Of Unnecessary Speed Ramps 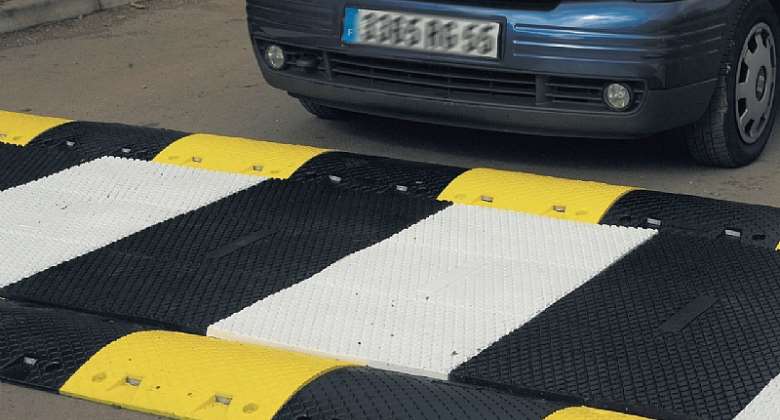 Speed ramps or speed breakers or better still speed ramps are the common name for a family of traffic calming devices that use vertical deflection to slow motor-vehicle traffic in order to improve safety conditions.

A speed bump is also known as a sleeping policeman in British English, Maltese English and Caribbean English, a judder bar in New Zealand English, and a lying-down policeman in Croatia.

The use of vertical deflection devices is widespread around the world, and they are most commonly found where vehicle speeds are statutorily mandated to be low, usually 40 km/h (25 mph), or 8 to 16 km/h (5.0 to 9.9 mph) in car parks.

Although speed bumps are effective in keeping vehicle speeds down, their use is sometimes controversial—as they can increase engine noise and may damage vehicles if traversed at too great a speed. Poorly designed speed bumps that stand too tall or with too-sharp an angle causes strains on shock absorbers of automobiles.

It is done with the intention of reducing over speeding of vehicles and motorcycles at some places especially populated communities along highways. Speed ramps are a cost effective way of regulating traffic.

Today, speed ramps have been erected to such an extent that, they have gradually become nuisance rather than agents of shield against accidents. Speed ramps have prolonged journeys beyond the normal stipulated time. This has been a worry to both drivers and passengers. What beats imagination is how locals of some communities which are located along the road sideline the laws of the country and erect speed ramps in defence of their own safety.

Although this illegitimate activity is geared toward saving human lives, the practice has become a thorn in the flesh of passengers. There is a lot of discomfort that accompanies these ramps. And this displeasure is mostly melted on innocent passengers of whose fault is not that drivers tend to flout road safety regulations and signs thereby endangering other road users.

Whereas the curbing of over speeding might only be through the erection of speed ramps, care must be taken that the comfort of passengers is neither endangered nor placed into disrepute.

Apart from the discomfort that passengers experience, illegally erected speed ramps has the tendency to cause chaos on the street. This is simply because they are not in the least to any specification. What is more threatening about them is that they are present with no fore-warning signs to alert drivers of the danger ahead. As if that is not deathly enough, those who make the effort of attaching a wooden replica of a road sign situate it at very disadvantageous points to road users such that by the time it is spotted, danger is already knocking. Legally constructed speed ramps also fall short of this common logic. Arguably, this is more catastrophic than over speeding.

The Ghana Highway Authority (GHA) has laid-down requirements relating to the design, construction, and placing of speed humps. The regulations also indicate classes of roads where ramps can and cannot be constructed.

For instance, under GHA regulations, speed ramps must go with traffic signs and pavement markings. The traffic sign should be placed on the right-hand side of the highway as one approaches the traffic calming device. Speed ramps are also supposed to be three to four inches high.

All this is done to ensure that no one or group of people take the law into their hands to erect illegal speed humps, which will cause a nuisance to drivers and passengers and even pose a threat to the lives of people.

But the situation appears to be the opposite on most major and even feeder roads with illegal ramps springing up by the day. Some of them can be as high as one foot with all the attendant negative impacts on vehicles that use the road.

Even some of the so-called legally constructed ones are not in the best of shapes in terms of where they are positioned and the dimensions.

On June 7, 1906, at a time when average automobile total speed was around 48 km/h, The New York Times reported on an early implementation of what might be considered speed bumps in the U.S. town of Chatham, New Jersey, which planned to raise its crosswalks five inches above the road level. This scheme of stopping automobile speeding has been discussed by different municipalities, but Chatham is the first place to put it in practice.

The phenomenon of erecting speed humps, many of them illegally constructed has gone beyond comprehension with some communities taking the law into their hands to mount speed ramps.

Almost every trunk road is infested with speed ramps causing unnecessary inconveniences to drivers and passengers, and posing a threat to the lives of people.

Against the backdrop of their negative impact on road transport and general economic development, the need for another look at it has become more crucial than ever.

Speed ramps can easily cause accidents. In January, 2013, a tanker carrying diesel, somersaulted and exploded at Anyinamso, a village on the Bibiani-Kumasi highway, killing two people and burning at least 15 houses.

Eye witnesses said, the speeding tanker overturned after climbing a speed hump on the road.

Most communities that complain of persistent vehicular knocks leading to loss of lives and injuries erect these illegal ramps in their localities to check speeding and protect lives.

According to media reports, some stakeholders have expressed concern about the inaction of the Ghana Highway Authority while the speed ramps were being erected recklessly by the communities, creating a nuisance to drivers and passengers. It is simply illegal for any individual or group of people to mount ramps on the major highways without approval from the authority.

Partly to be blamed are some government institutions who fail to perform their duties which had led to the public taking the law into their hands to erect illegal speed ramps and endangering lives and property.

Legal speed ramps are usually well constructed and they are not placed just anywhere. The experts place them at points where they would not cause a nuisance to people, since they do it according to laid down specifications with regard to the length, height and grade.

Statistics of road traffic crashes which reveal that there is in excess of 2,000 deaths annually is worrying, considering the dire consequences it lives on the country as a whole and families of victims in particular.

Provisional Statistics on road traffic crashes at the end of May, 2016 indicated that 5,135 road traffic crashes were reported involving 7,954 vehicles. Casualties comprised 888 fatalities, 4,517 injuries, and 1,171 pedestrians were knocked down either along or across the road.

Comparing that to the same period in 2015, there was an increase of 7.34 per cent in cases reported, with 7.30 per cent of vehicles involved and 31.43 per cent of pedestrians knocked down, while fatalities record stood at 27.04 per cent and 11.39 per cent obtained persons injured.

Efficient service delivery by emergency services such as fire tenders, ambulances and police revolves around their ability to arrive at the point of need in time. It therefore beats imagination how their time riddled services would be effectively executed with the current nature of our roads. Notwithstanding the claim that speed ramps and other speed calming devices reduce accidents on the roads, they have varied effects on occupants, the vehicle itself and ultimately reduce productivity through precious time lost. Speed ramps are a potential threat to the prompt service delivery of Ghana National Fire Service and possibly cause cumulative damage to fire tankers. Road traffic and safety policies have been solely centered on reduction of casualties on roads to the neglect of capital assets protection. Each year the country looses huge sums of capital resource owing to destruction of properties and the Ghana National Fire Service has been mostly blamed for their incapability to arrest some of these fire happenings. In 2003, the chairman of the London Ambulance Service, Sigurd Reinton claimed that delays caused by speed bumps were responsible for up to 500 avoidable deaths from cardiac arrest each year.

It is true that disgruntled community dwellers who illegally erect speed ramps do not consider this simple fact.

Since we live in a country where emergency service vehicles ply the same route as other vehicles, there is the need to review the current state of our roads which can currently be classified as bumpy and unfavorable for traveling.

Other disadvantages of speed ramps include:
Possible increase in noise and pollution for residents living immediately adjacent to the speed ramps; damage to some vehicles; increase in traffic noise, especially when large goods vehicles pass by; Required signs, street lighting and white lines may be visually intrusive; causing discomfort for drivers and passengers.

Other sources argue that speed bumps:
distract drivers from other hazards such as children

Are a compromise for more active enforcement;
Increase noise by creating tire-to-bump thumping and increasing the amount of engine-revving.

What we all have not thought of is that, speed ramps have the means to cause permanent spinal damage and aggravate chronic backache.

It is unbelievable the way some drive carelessly and above the mandatory speed limits through the villages on the highways.

An interesting and annoying phenomenon about these lawless drivers is that, they only bow to "SLOW DOWN, POLICE BARRIER AHEAD". Since this deters them from over speeding, more police barriers should be stationed along the major roads as a substitute to these speed ramps.

Erection of traffic lights in communities along major roads in the country would also be a welcomed alternative to speed ramps.

Unarguably, speed ramps have been very productive when it comes to traffic calming. It has helped a lot especially in the reduction of accidents that happen in populated communities where vehicles and other automobiles provocatively knock down pedestrians. Their relevance on the road can therefore not be underestimated. But there is still the need to review their quantity on our roads.

Kpedator Elorm
A native of Woe in the Keta Municipality and a teacher at Tokuroano D/A Primary 'A' in the Karachi East District.

E-levy has been approved, we just need backing legislation –...
30 minutes ago