The Mahama Legacy In Perspective 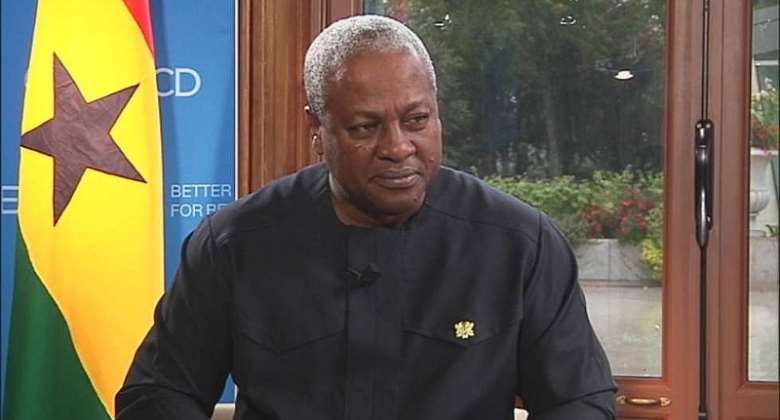 The inauguration of Nana Akufo-Addo on January 7, 2017 as President of the Republic of Ghana and the smooth transition of power from NDC’s John Mahama has clearly demonstrated who the true democrats in Ghana’s political terrain are. In 2012 when the same Ghanaian electorate elected John Mahama as President in genuinely run elections, the reaction of then flagbearer Nana Akufo-Addo and the NPP was to dispute the election results, and to destabilize Ghana with a vicious election petition designed to put controversy on the legitimacy of John Mahama’s Presidency. In this regard, his inauguration was tainted with controversy and boycotted by the NPP in the eyes of the world - and for eight months he was before court with controversy hanging over his presidency. Right from the word go, he was subjected to insults and vilification from Akufo–Addo and members of the NPP who could not accept the fact that they had truly lost an election. Indeed the strategy of the NPP was to make Ghana ungovernable as long as Mahama was President.

Aside from the court petition, Akufo-Addo and the NPP mobilized all forces both physical and spiritual to destabilize Mahama’s Presidency. This strategy continued even after the Supreme Court confirmed the election results as valid, and throughout Mahama’s 4 year term as President. Some of the hostile forces that were mobilized by the NPP against Mahama were civil society groups, media surrogates, some members of the judiciary, labour leaders, Chiefs and opinion leaders sympathetic to the NPP,and ironically pro-NPP prophets and religious leaders. The strategy was to mobilize and instigate these groups to champion a crusade to make the Mahama Presidency unattractive to the average Ghanaian. Indeed this strategy even went to the desperate extent of co-opting Ex-President Rawlings and his wife to play a role in destabilizing the Mahama Presidency from within as was evidenced in the formation of the NDP – a party which was used by Rawlings and his wife primarily to battle President Mahama and the NDC from within.

Ironically the hatred for the NDC that easily facilitated the mobilization of all these hostile forces against Mahama’s Presidency can be traced primarily to hatred of Rawlings by victims of his 19 year reign as President, who had found refuge in the NPP. Their deep hatred for the NDC cannot be because of Professor Mills or Mahama, but primarily due to the fact that they have negative and painful memories of the Rawlings era which has been transferred to the NDC - a party that he is associated with as founder.

On the part of religious leaders and prophets, the NPP succeeded in influencing their mentality to cause them to behave contrary to the biblical cardinal principle of “loving your neighbour as yourself.” In this regard, some were influenced to operate with so much hatred for the Mahama Presidency to levels that were baffling and defied established Christian virtues. Others were also converted into political prophets and used to preach doom, gloom and armageddon in Ghana should Mahama be retained in power.

As much as possible, the Akan tribal card was also manipulated to galvanize the middle class and the educated elite of Akan heritage to develop hatred for a Government that was headed by a non-Akan. In this regard, media outlets that predominantly used Akan languages were established throughout Ghana to fiercely support and promote the NPP cause. They were utilized primarily to destabilize the Mahama Presidency with daily doses of concocted fabricated news calculated to make the Mahama Presidency unpopular, and as being the cause of all problems of Ghanaians. On these friendly media outlets it was virtually taboo to highlight any good works of the Mahama Government. Labour and Union Leaders were not left out of the mix of this vicious political strategy of Akufo-Addo and the NPP. They were also instigated to resort to strikes and demonstrations at the least provocation in support of the strategy to make Ghana ungovernable under Mahama’s Presidency.

Against all these odds however, Mahama focused on delivering on his mandate and miraculously left a legacy of monumental proportions within a short period of 4 years which could only be explained as having occurred through divine provision. Indeed God has used Mahama to elevate Ghana to a level in Africa which cannot be discounted. In this regard there is no denying the fact that the standard of governance that Mahama has set is very high indeed. It includes high democratic standards and tolerance of opposing views, a high standard of infrastructural development only witnessed since Nkrumah’s era, a high standard of leadership by compassion, a high standard of respect for institutional governance, a high standard of respect for rule of law, a high standard in the fight against corruption, a high standard of leadership in foreign affairs which was witnessed only during Nkrumah’s era, and a relatively good standard of economic development. This generally is the legacy that Mahama has come to be associated with. Of course there are those who would associate Mahama with other legacies such as Ghana’s perceived high debt overhang and perceived high corruption among others to enrich the debate.

Akufo-Addo’s Presidency would definitely be judged by these standards of the Mahama‘s legacy. He would have no excuse to deliver to Ghanaians standards any less than the high standards that Mahama has left behind. Unlike Mahama who had to navigate his Presidency through hostile waters from day one, Akufo-Addo has been presented with smooth and calm waters within which to navigate his Presidency from day one by Mahama. This is in spite of numerous acknowledged issues of irregularities and hacking of the EC’s system which trailed the 2016 elections and could have been the subject of election petitions had the shoe been on the other foot.

Akufo- Addo therefore has no excuse to fail except for the fact that he has laid the foundation for his possible failure with gargantuan promises, coupled with huge public expectations that would be operating simultaneously with the laws of natural justice and cardinal biblical principles which call on all of us to love our neighbours as ourselves whether they belong to one party or the other. The methods that were employed to secure his Presidency would thus surely impact on Akufo-Addo’s presidency as it unfolds. For Ex- President Mahama, he has established himself as a statesman par excellence in the history of Ghana and Africa politics, and posterity will surely judge him well in due course.