The Conspiracies Of Election 2016 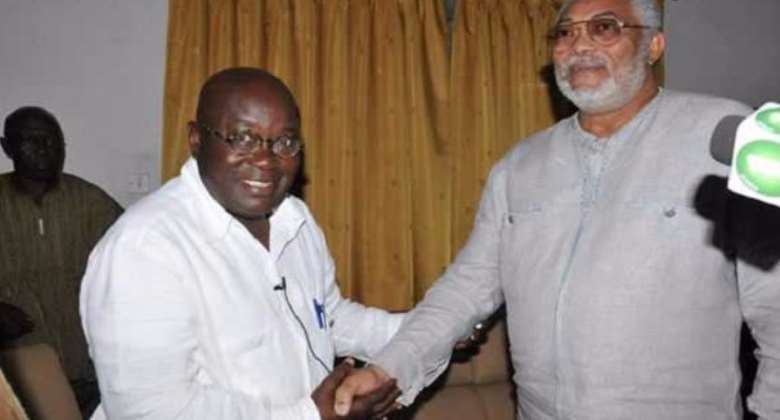 However, in his haste to publicly thank Rawlings for his role in his victory, Akufo Addo has demonstrated political short sightedness and a selfish streak that is certain to uncomfortably ruffle feathers not only in the NDC but in the NPP as well.

Akufo Addo’s political short sightedness lies in the fact he is underestimating the fact that the background of a chunk of the political support base of the NPP revolves around the same Rawlings that he is openly fraternizing with. That chunk of NPP’s political base is largely in the NPP because they perceive themselves to be victims of Rawlings’ 19 year rule who took refuge in the NPP and have contributed their lot to get the NPP to where it is today. Indeed it was to reflect the emotions and aspirations of this support base that Ex-President Kuffour went as far as exhuming bodies of Army Generals and prominent Ghanaian citizens who lost their lives during the Rawlings era.

It was also for this same reason that Kuffour set up the National Reconciliation Commission, to ostensibly reconcile the nation, but in reality to denigrate the Rawlings legacy as much as possible. Indeed, it is a fact that emotions of this history culminated in Rawlings referring to Kuffour as “Ataa Ayi” (a notorious arm robber) and Rawlings’ wife being hauled before court by the Kuffour Government on corruption charges. In all of these ordeals it was a strong NDC that came to the aid of the Rawlingses.

By openly fraternizing with Rawlings, Akufo Addo is in effect stabbing the bloc of NPP support base that suffered during the Rawlings’ era in the back for the sake of his selfish agenda to win and maintain political power. Whether this fraternization with Rawlings will help him honour his gargantuan promises and maintain political power is yet to be seen. It should however be obvious to Akufo Addo that his fraternization with Rawlings has dented the credibility and image of Rawlings on the NDC front; and for as long as he openly relates with Rawlings, the image and credibility of Rawlings in the NDC would continue to obviously weaken.

In effect the Rawlings factor would cease to be of any significant political capital to Akufo Addo’s Presidency for as long as he openly engages Rawlings. Indeed the repercussions of his open fraternization with Rawlings has far more negative consequences on the political dynamics of his NPP support base than on the NDC’s future whether he realizes it or not it.

For Rawlings, it should be obvious to him that he has committed political suicide by openly being associated with and playing a role in Akufo Addo’s victory. Whether he admits it or not, he would have to operate in an environment in which his party would not wield political power. Indeed his passion for probity and accountability would be put to the fullest test during the Akufo Addo era.

Rawlings should also not be oblivious of the extreme political power that the NPP now wields. It has control over Parliament, the Executive the media and apparently the Judiciary. This is the political reality that has emerged partly as a result of his unholy alliance and collaboration with Akufo Addo.

With the current political terrain it is obvious that Rawlings would have to thread cautiously because the reality is that he has more enemies in the NPP than the NDC. The NPP only found it convenient to use him to achieve their desired political agenda. They would obviously not tolerate him if he crosses the line to take on their Government- a course he would have to pursue to make himself relevant in the dynamics of NDC politics.

Will he be able to present a true June 4 speech or celebrate 31st December Revolution under Akufo Addo’s presidency for the next 4 years?

Is he oblivious of the fact that the Judiciary (largely NPP sympathizers) yearly celebrate Martyrs’ day because of the pain and excesses of his Government?

The Rawlingses have largely benefited from the protective shield that a strong NDC party has provided them. They should therefore realize that they would be the biggest losers within the context of a weakened NDC as desired by the NPP.

On the other hand, President Akufo Addo should elevate his politics now to the level of a statesman and nationalist, and realize that the task ahead for him is ensuring that he delivers on the numerous election promises that contributed to his victory. He may well be mindful of the fact that in 2012 Rawlings did not campaign for the NDC but they won the elections. Whether he succeeds in Government or not therefore depends on his ability to do better than President Mahama in 4 years and not on the Rawlings factor.

For Rawlings to be more concerned about taking pictures with Akufo Addo after the elections in the midst of a hostile environment in which innocent NDC sympathizers and civilians were being attacked by NPP goons, epitomizes how far he has allowed himself to be used by Akufo Addo to destroy his own house. He should be ready now to enjoy the comfort of his neighbour’s house that he has helped to raise.

Generally, Rawlings act of sanctioning his wife’s formation of a party which was used soley to fight the NDC has dented his credibility within NDC political circles. Compare his negative actions to that of Kuffour with NPP in opposition. Did Kuffour sanction the formation of a political party to fight his own party despite the fact that there were sections of the NPP who were openly hostile to him? Indeed there was not a single occasion in which Kuffour put down his party and its flagbearer publicly unlike the open actions of Rawlings and his wife deliberately calculated to undermine and weaken the NDC and President Mahama.

Election 2016 indeed has had interesting revelations and insights involving personalities in Ghana’s political landscape. President Akufo Addo has demonstrated political savvy and succeeded in manipulating the Rawlingses to achieve his political objectives. He has succeeded in placing Rawlings where he wants him - in a political environment where he would cease to be of much relevance in Ghana’s political landscape. Whereas Akufo Addo and Kuffour have always had their focus on the larger national picture, Rawlings has consistently focused on a narrow agenda of controlling NDC, if even it involves dancing with his enemies to weaken the NDC.

It should be obvious to him that in the current scheme of Ghana’s political dispensation he would be closely monitored to ensure that he does not champion the cause of any serious reorganization of the NDC in opposition. He would be tolerated and idolized by Akufo Addo and the NPP for as long as he plays the enemy within role in the NDC for them.