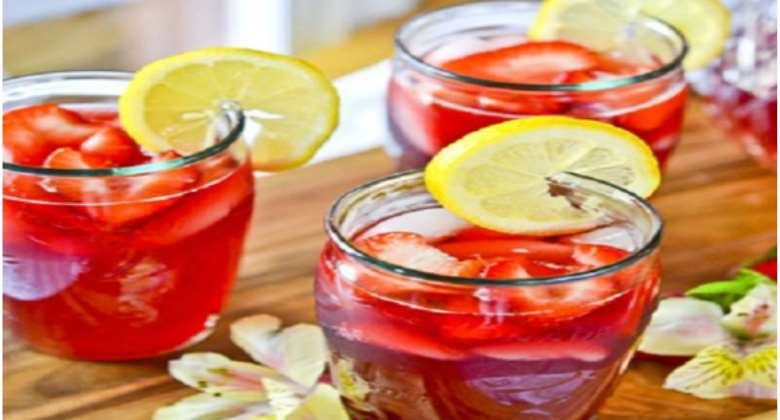 Hibiscus tea is made from Hibiscus sabdariffa -- a subtropical and topical flowering plant. Its flowers are used for medicinal purpose, making edible products and flavoring herbal beverages. Consuming hibiscus may impart some benefit such as stimulating weight loss, strengthening the immune system by providing vitamin C and antioxidants, reducing the intensity of hot flashes and solving dandruff and acne problems. Despite the benefits, hibiscus tea may have hazardous side effects.

Health Risk
Before adding hibiscus tea to your diet, consult your doctor about any preexisting health condition you may have. According to the Bastyr Center for Natural Health at the University of Pennsylvania, hibiscus tea may open and expand your blood vessels, which may increase your risk for heart disease. Drinking hibiscus tea daily may drop your systolic blood pressure by 7.2 points on average. Avoid drinking hibiscus tea if you are taking medication for hypertension and low blood pressure.

Pregnancy Risk
Research conducted at the Guru Jambheshwar University of Science and Technology in India on pregnancy and fertility showed that hibiscus tea has estrogenic qualities. Excess hibiscus interferes with female fertility and childbearing. It reduces the level of estrogen especially in women. Hibiscus tea contains polycylic aromatic hydrocarbons, which are associated with cancer and birth defects. Expectant mothers should avoid hibiscus tea.

Drug Interaction Risk
Hibiscus can interact with some medications. It has anticancer effects when taken with other anticancer agents and an additive effect when taken with antiviral agents. It decreases antimalarial efficacy of drugs such as chloroquine and quinine and alters some inflammatory agents processed by your body such as acetaminophen. If you are taking anti-inflammatory drugs, wait for at least two hours to consume hibiscus tea to avoid adverse side effects.

Hallucinatory Effects
A sense of feeling intoxicated and hallucination are common side effects of hibiscus tea. The tea has can impair your focus and concentration. When engaging in activities that demand full alertness such as operating machinery or driving, avoid drinking hibiscus tea.

Infusion confusion
There are also many claimed, and sometimes spurious, health benefits, to certain infusions. The growing popularity of such tonics, which might include the likes of ginseng, Gingko biloba and even hibiscus are often seen as a viable alternative to pursuing a healthy diet, lifestyle of taking prescription pharmaceuticals despite there often being little scientific evidence of benefits and sometimes research to show that certain products may be detrimental to health if taken in excess.

One popular infusion, is that of hibiscus, which is prepared from the crimson sepals of the flower and imbibed hot or cold. The "tea", which often goes by the name "Jamaica" in the USA, or "roselle infusion", is a refreshing albeit tart beverage. It is well known in Turkey and Arab countries. It contains vitamin C and various minerals as well as up to a third organic acids - citric, malic and tartaric. The infusions also contain acidic polysaccharides and flavonoid glycosides, including cyanidin and delphinidin, which are deep red. Hibiscus infusions lack caffeine, which is often found in tea, coffee and other infusions.

However, Jan Malik, Adela Frankova, Ondrej Drabek, Jirina Szakova, Christopher Ash, Ladislav Kokoska of the Czech University of Life Sciences Prague, will report in the August issue of the journal Food Chemistry how various heavy metals can also be present in this and other infusions. Their analysis reveals that aluminium, boron, copper, iron, manganese, nickel, phosphorus, zinc, calcium, potassium and magnesium are present.

Aluminium safety alert
Based on their analysis of hibiscus infusions, they found that aluminium levels were high enough for them to recommend that no sensitive person drink more than a litre a day of hibiscus infusion. They suggest that children, pregnant women and anyone with chronic kidney problems should avoid this infusion entirely. Aluminium is a non-essential element and is a neurotoxin the negative effects of which are particularly well known from patients with chronic renal failure on early kidney dialysis machines. The researchers add that hibiscus infusions might also represent a significant source of boron from food for some people, up to approximately 5.5 milligrams per litre as well as manganese. A large amount of available manganese (up to about 17.4 mg/l) can have adverse health effects.

The team points out that in contrast to earlier studies of tea (C sinensis), their analysis of raw materials from hibiscus (petals), rosehip (receptacles), ginkgo (leaves), lemongrass (leaves), aloe (leaves) and ginseng (roots) were demonstrated not to be accumulators of the elements tested. An accumulator is defined as a plant that assimilates aluminium to levels of 1 mg/kg. However, the leachates tested did show high levels of the various elements to different degrees in each plant material used, with hibiscus being particularly worrisome.