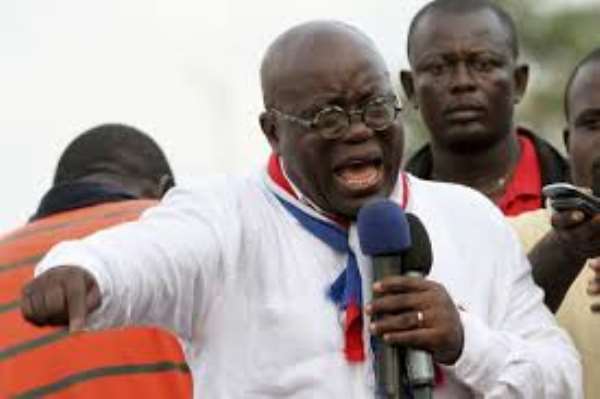 Nana Akufo-Addo’s main campaign message has been that there is hardship in Ghana so he should be made President. In other words he is the Messiah with all the answers to Ghana’s problems and should be voted into power for all hardships faced by Ghanaians to vanish into thin air. On the basis of this simplistic message Akuffo Addo believes that he is qualified to be made President of Ghana in place of President Mahama.

Granted that there are hardships in Ghana – just as there are hardships in most countries in the world today - is that the basis for anyone to demand that Ghanaians make him President at all cost as Akuffo Addo is posturing? Granted that Ghanaians are suffering today as a result of hardships caused by Mahama which appears to be Akuffo Addo’s main campaign message, then the next logical question to ask is whether Akuffo Addo has the capacity and leadership qualities to eliminate these hardships.Is Akuffo Addo really the Messiah that he is projecting himself to be? The answer to this question is to examine Akuffo Addo critically to determine whether he is capable of solving the problems that are the causes of the hardships of Ghanaians that he gladly points to frequently.

The significant question to ask further then is - what has been Akuffo Addo’s track record in leadership in solving problems when he has had the opportunity to lead? Thankfully, Akuffo Addo is no stranger to Ghana politics; therefore Ghanaians have many reference points to his leadership and competency credentials that would surely guide them in determining which candidate is better suited to tackle hardships confronting them presently. In this regard, Akuffo Addo’s leadership of the NPP from 2007 to date when he has had the opportunity to be flag bearer is ample testimony of his capability to solve problems or eliminate hardships when offered the opportunity.

What is the state of the NPP today as compared to the era before Akuffo Addo’s leadership? Has Akuffo Addo’s brand of leadership not reduced the NPP to a party that is seriously fragmented and confronted with issues that have succeeded in creating more hardships for NPP members than they have ever experienced? Prior to Akuffo Addo’s era in leadership had the NPP ever experienced a situation where its duly elected National Chairman, General Secretary and Vice chairman were suspended and kicked out of their positions largely because Akuffo Addo and his allies did not favour them in the positions to which they were elected at the party’s congress.

Is it not the case that under Akuffo Addo’s leadership NPP members who have ventured to criticize Akuffo Addo have been harassed or suspended for offering alternative opinions on issues affecting the NPP? Prior to Akuffo Addo’s era, was there ever an incident in the NPP when a party member was doused with acid as a result of the mismanagement of internal party issues that were made to degenerate to insane levels? What has been the quality of leadership that Akuffo Addo has offered with regard to issues of corruption in the handling of NPP party funds as indicated in the Ohene Ntow Committees report? Or is it because the committee asked questions about the £100,000 of NPP funds that ended in the flagbearer’s pocket without any serious accounting that resulted in this significant issue being poorly handled? Has Akuffo Addo demonstrated any superior leadership qualities regarding issues of discontent involving NPP parliamentary candidates who have been undermined by Akuffo Addo and his allies merely because they have been tagged as pro Allan, pro Kuffour or pro Afoko?

The Akans have a saying that “if you do not know death look at sleep” Granted that there are hardships in Ghana today - and indeed there will always be hardships in any growing economy such as Ghana - is Akuffo Addo the alternative to President Mahama with regard to solving problems of hardships confronting Ghana today?

Against the background of the numerous goofs and wrong choices in judgment and lack of leadership that have been exhibited by Akuffo Addo when offered the opportunity, it is clear beyond doubt he is not the Messiah that he is projecting himself to be. Indeed one can confidently say that against the background of how he has handled the leadership of the NPP since he took over in 2007, Akuffo Addo would rather compound and aggravate the hardships of Ghanaians if offered the opportunity. He is yet to demonstrate to Ghanaians that he has any leadership qualities superior to what President Mahama possesses as demonstrated by his handling of NPP affairs among others.

The majority of Ghanaians are not convinced that Akuffo Addo is a better alternative to President Mahama. Hardship or no hardship, they would renew the mandate of President Mahama not because they love hardship but because they are not convinced that Akuffo Addo is the antidote to solving problems confronting Ghana today. His actions and miscues in judgment are way too many and do not convince the generality of Ghanaians that he is the answer. It is for instance hard to fathom why any serious general going into battle would create divisions within his own army and hope to win the battle over his enemy, unless the general is complacent and is unwisely underestimating his enemy’s strength.

Akuffo Addo is hanging his hopes on perceived hardships in Ghana as his main campaign message. His character traits and ability to solve problems would therefore prominently weigh on the minds of Ghanaians. His lack of leadership in steering the affairs of the NPP would certainly not make him the preferred choice for Ghanaians as an antidote in their quest for capable leadership come November 7, 2016. His penchant for heightening tensions unnecessarily in Ghana prior to elections is also a major put off to many peace loving Ghanaians, and would once again guarantee his defeat in the upcoming elections.

It will certainly take more than just reciting incidents of hardship in Ghana to beat a candidate as formidable as President Mahama. A better and smarter strategy would be for Akuffo Addo to campaign more on his own merits, strengths and leadership qualities and achievements rather than his strategy of praying for hardships and crisis to occur in Ghana as a basis for victory in election 2016.