Some Funeral Cultures In Ghana, Africa And The World 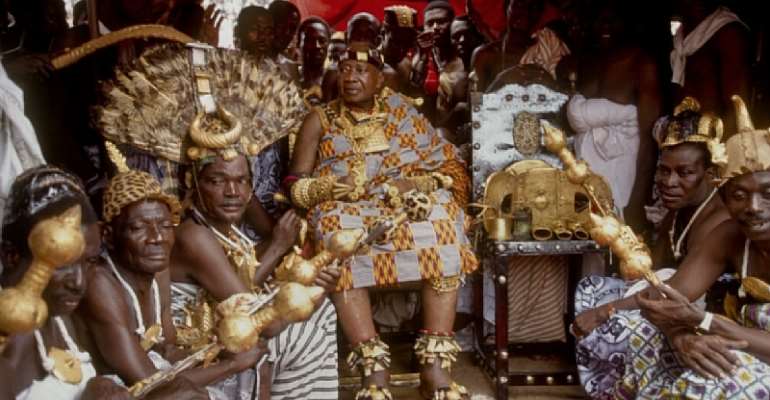 The late Asante King of Ghana; Otumfuo Opoku Ware II seated fourth from left in photo with his subjects and adorned in Ashanti Kente cloth and gold, to his right is the legendary Golden stool.

Funerals are traditional rites that date back to creation. For many cultures across the world, they form part of the rites of passage performed to usher the dead into the spirit world or the afterlife. Funerals are deeply rooted in creation as these rites started to be respected and performed right from the days of the biblical Adam and Eve, or wherever the concept of creation starts for you as per your faiths.

Every culture since civilization tends to the appropriate care of its dead and most of them have three things in common as far as disposition of the dead matters. Firstly, the organization of some type of funeral rites, rituals, and ceremonies. Secondly, the securing of a sacred place for burying the dead and thirdly, memorializing of the dead.

It is all joy anytime a child is born, however death presents a direct contrast. Even when people die at ripe old ages, they are mourned by their families extensively or briefly depending on the culture in which the death occurs. Sometimes, the older the dead, the merrier and grander the funerals organized.

In the Ghanaian custom, funerals share common procedures though there are some noticeable distinctions. For some, the rank of the dead or tradition from which they hail determines the way in which their funeral rites is organized. A typical example will be like a King, Chief, or somebody from a royal family or of noble standing; This personality is given a much more elaborate funeral laced with all the associated rituals involved.

It is common practice among many Ghanaians in recent history to keep their dead in the morgue for times stretching between weeks or even in some cases years. If the dead person were a royal or holds an office to which a successor is not easily or simply chosen, the dead is normally kept for as long as it takes for their successor to be found, and this is not strange to the Ghanaian culture.

In such peculiar cases, mourning goes on for as long as it takes to prepare and plan the burial and continues even after the deceased has been buried. In Ghana, the traditional dress color for mourning the dead is black and in certain cases red or brown. The wearing of the black dress is very normal to every traditional home where funerals occur.

In some rare cases, the dress code for a funeral is white or some other color. When it happens, the organizers of such funerals defend their use of white clothing as their desire to celebrate the passing of the dead rather than mourn them. This happens to be case sometimes when the deceased lived longer or might have died younger but made tremendous achievements in their lives that impacted many people or for other reasons.

In decades past, Ghanaian funerals have been organized in much simpler ways to cut down on cost, however, the case is no longer the same today. In recent times funerals among Ghanaians and Africans in the USA and back home in their respective African countries have almost become a business-like activity.

The business of undertakers have flourished. Today the building of coffins to reflect the profession of the dead is very common in Ghana. A doctor or fisherman for instance might be buried in a coffin that is built to respectively look like a syringe or a fish or whatever suits the condition respective cases.

Today some bereaved families hire the services of undertakers to organize the entire funeral and do things like employing the service of criers who weep to entice guests to join in. The criers are believed to add bite to funerals, bringing some dignity and honor to the dead and especially their family. In many cases parties are organized with DJ’s performing to entertain relatives and friends of the dead.

Funerals are now major displays of extravagance in most parts of west Africa and Ghana. Families try to out do each other in terms of who organized the best and most expensive funeral(s). In certain regions of Ghana, funerals are major platforms where people go to display their affluence.

The way in which a royal is buried however, is different from the way an ordinary person is. A royal will be buried with all the necessary regalia, pomp and pageantry, as was richly displayed in the case of the Ghanaian culture during the celebration of the death and burial of the Asante King; Otumfuo Opoku Ware II. The Otumfuo who lived from November 30, 1919 died on February 26, 1999. For most royal families in Ghana, the belief is that a royal is expected to continue his or her reign in the spirit world after death.

Owing to this concept, the addition of gifts of remembrance and things that might come in handy for the departed soul is placed in their coffins or tombs. This practice was common in ancient Africa, especially among the Egyptians who are known to have mummified dead Pharaohs in tombs built inside grand and intricate pyramids thousands of years ago.

As earlier said, a unique feature about funerals among Ghanaians today is that they have become flamboyant, so much so that some sections of society is getting troubled about it as some Ghanaians in and out of the country would have preferred that the deceased is buried solemnly and gracefully in an inexpensive manner, simply because the dictates of today’s glamorous funerals among Ghanaians imposes huge expenses.

The pressure to organize elaborate and showy funerals have compelled many people who do not have the money for such to go ahead and do it all the same. Most often than not, this becomes detrimental to a grieving family as they are saddled with debt problems afterwards. People still continue to indulge in such funeral extravagance and it appears not to be a solely Ghanaian thing as cultures across west Africa and the globe are guilty of this phenomenon.

Situating funerals of Ghanaians in the context of other African countries, there are very noticeable similarities as they basically follow very similar patterns. There are however some differences across Africa and the globe that are worth touching on due to how bizarre or interesting they tend to be in nature.

One such example is seen in the African country of Congo where in the past some Pygmies deal with death in an entirely strange manner. The huts of the dead and that of those around them are pulled down on top of the dead body and the community evacuates their village camp. Family members mourn the loss with crying. Afterwards, the dead individual is never mentioned again. Similar to the Pygmies, the destruction of the homes of dead people was common among the Congolese.

There is this superstition among relatives of the dead among this custom that the dead sometimes return to where they died, which is why besides the pulling down of their huts, family members of the dead and in certain cases, entire villages walk a different route in an attempt to prevent the spirit of their loved one from following them back home.

Have you heard about the rare and ancient Hindu burial practice called Sati? This rare Hindu practice involves a widow burning herself alive during the funeral of her husband with the believe that this ultimate act of loyalty to her husband will turn her into a goddess. Shrines are put up in honor of a woman who does this. This practice is frowned upon in modern day India but it occasionally continues to happen. In 1987, an 18-year-old girl cremated herself alongside her 24-year-old husband. Sati also happened twice in 2006 and once in 2008.

By now, cremation is no longer a ‘wow’ practice of disposition of the dead. A wow discovery I however made was the fact that some cultures today leave their dead to decompose out in the open whiles others let vultures peck on the bodies of their deceased.

But, it is comfortable to say that most cultures worldwide bury their loved ones who have passed on, in the ground, a practice as old as creation itself and talked about in the Christian Bible in Genesis 3:19 which reads: ‘by the sweat of your face you shall eat bread, till you return to the ground, for out of it you were taken; for you are dust, and to dust you shall return‘. May the souls of all the departed now rest in peace.