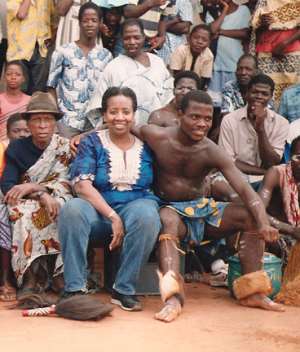 I get an idea for an article, I enter it on the computer. Consequently my computer has numerous articles some completed and others not. Here is something I wrote back in 2011 that I wish to share with you.

One might say that the title is odd and question the implication thereof. Seriously speaking one never knows from where the inspiration for the next writing will come. My sources come from a variety of avenues. All I have to do is close my eyes and reminisce and dozens of evocations stimulating memories of the pat begin to flash on the closed lids of my eyes as if they were on a movie screen. These evocations carry me back to my childhood where I am, unknowingly, being prepared to answer the invocations of my ancestors even though I do not know who they were of from which country in Africa they hailed.

The incantations of my ancestors are summoning me to accomplish a task for them, something they have been wrestling with for decades, if not centuries. Their summoning comes in the form of rhythm and movement. I on this side of the Atlantic Ocean do not fully comprehend what is happening to me. All I know is that something is pulling on me like the force of the moon causing the tide to rise. These silent incantations fortify my interest in rhythm and movement. The sound of a drum would provide a buttress or support wall that would later become the foundation of my percussion notation system, Greenotation

Things would begin to take shape and form when I was in high school. I was a student of music and dance. As a dancer I appeared in an annual concert at Carnegie Hall. There was an allotment of time that needed to be filled. Congo drums were brought to the stage, and a routine was choreographed. I volunteered to be one of the dancers who would perform this routine. When the drummers began to play we came out on stage. I became extra energetic and the other dancers stopped and I continued my creative rendition of the movements I believed my ancestors performed in their villages. Thus I was granted a “solo spot called Queen of the Jungle Mist. I would perform this dance each year.

I had to choreograph a new routine each year for my solo. As a musician, I realized that the musicians, drummers who played Congo drums, could not read music and never played the drums in the same manner at each rehearsal. I tried to express the rhythms I wanted with written notation, but that fell on deaf ears. I had to find a way to write the sounds I wanted through another method. This method would have to be pictorial wherein they would see a symbol and that symbol would indicate to them where to place their hand on the drum to produce a certain sound. I did not know how I would do this, but knew I had to do it.

One day as I was seated in the stenography class, I heard the teacher remark that any sound could be written with Pitman Stenography. She wrote the symbols for the words “may’ and “we” on the board. We thought it was English and she said it was French. The same symbols in French indicated the words “Mais” and “Oui”. I pondered this statement and thought to myself if any sound can be written, why not write drum sounds. I picked up my pencil and wrote, using the word” drum” in shorthand, I factored out the consonants D and M. With that I wrote the sounds “Do-do-do-Dum”. I ended this rhythmic phrase with a sharp slap to the drumhead that was represented by the stenographic symbol for the words ‘eye’ or “I”. In actuality the symbol was the music symbol used for “accent’ in music. Thus my first drum phrase was “Do-do-do- Dum Chak”. This was a rhythm commonly played on the Congo drum. It represented open strokes (Do); closed stroke (Dum); and (Chak) a slap to the drum. Thus my journey into percussion notation had begun.

Let me flash back to the continent of Africa at that time. As we all know the music of Africa is largely a percussive oral tradition that is passed from one generation to the nest by a mouth-to-ear process. Most of this music is held in the heads of a caste of people called Griots in West Africa, who are in charge of the dissemination of these massive cultures. Unfortunately any society that is entirely dependent upon oral transmission for the distribution of their culture between generations is doomed to failure because of the breakdown of the human memory and outside interpretation. Unlike other forms of music in the western world, written notation can support and document the music because of its melodic nature. There was no system in place that could transfer the percussive music of Africa into written documents. Therefore, I ask what happens to the music when the Griots die? In actuality each time a Griot died, he literally took archives of African music to the grave with him where it was lost forever. Realizing that the death of these Griots would eventually completely deplete centuries of African music and dance cultures, Africans launched a quest to find a way to preserve their musical culture in written form not only to safeguard them but, to give it perpetuity just like the western system has done for melodic music of the western world.

Seated on this aide of the Atlantic Ocean, I had no idea which African country or individual was behind the search for a system to write African music, But I was made aware that there were meetings under the name of African Music Rostrums between African nations and the United Nations where discussions on African music was the predominant topic on the agenda.

There is a Yoruba expression that is played on the Iya-Ilu drums of Nigeria that sums up the incantation that would eventually bring me to the continent of Africa to study, research and share my work with Africans.

I strongly believe that this is the collective incantation that was being expressed by my ancestors and firmly implanted in my mind as a gift from God. This would lead me back to Africa. African Music Tomorrow means that Africa now has a notation system of her own.

Supply laptops to teachers for monies deducted before end of...
47 minutes ago