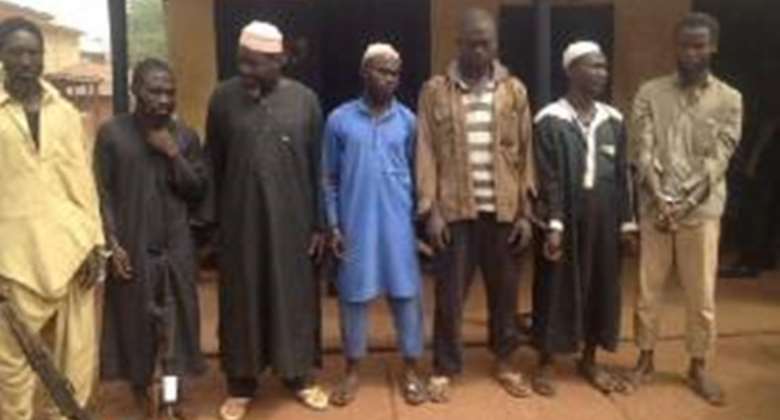 The seven suspects under arrest

All Ghanaians must doff our hats for the Ghana Police Service for the feats they have chalked so far in their service to the nation.

The Ghana Police, have taken many actions that are far reaching in keeping the nation peaceful and free from serious crimes and extremism.

The police command in the Ashanti region under ACOP Nathan Kofi Boakye has succeeded in arresting and prosecuting many criminals resulting in the region thereby gravitating towards becoming a relatively peaceful one. The police in the other regions are also believed to be doing their bit to gain upper hand on known criminals in those areas. In all that is being done by the police the action taken by the northern police command seems to have caught the attention of many people in and outside the country.

The story is that, seven people have been arrested by the police with two AK 47 assault rifles in Salaga in the Northern Region on December 24, 2015. They are suspected to also have links with Islamic group abroad.

Aside from the weapons, a computer and a laptop retrieved from the suspects were found to contain pictures and materials of training kits of the dreaded Islamic group, Islamic State (ISIS).

The computer laptop was also said to contain pictures of how ISIS decapitated their victims which goes to reinforce the suspicions of the group being in league with the dreaded Islamic group.

According to the police, preliminary investigations indicated that the suspects who lived at Lamashegu, a suburb in the Tamale Metropolis might be involved in recruiting and indoctrinating young people on issues on Islamic extremism.

A happy turn in this matter is that the police are pursuing some people mentioned in the case while the seven accused persons have been transferred to Accra for further investigations and interrogations in the matter. While commending the police for their prompt action on the issue we ought to also commend the chiefs and people in areas where the seven people were arrested. It is believed that the police took their action upon tip offs. That is good. Since the police can only act of information from the people everyone must endeavour to inform the police of activities of suspicious people in our society. This is the only way these nations’ wreckers and extremist could be arrested. The arrest of the seven men must send a signal to all people in the country especially those wishing to join extremist groups. These people must desist from their intentions because Ghanaians will not tolerate them. And when they are arrested they would be made to face the full rigours of the law. The question is, are the current crop of you interested in taking this risk ? i don’t believe so because Ghanaian are God fearing people and wish to live in peace at all times. Therefore the message to all is that let us condemn all those wishing to join ISIS and any extremist groups especially those wishing to buy or sell dangerous arms and ammunitions by reporting them to the police when found in our homes and localities.

MoMo transaction value for April declines by GH₵2.8billion
54 minutes ago