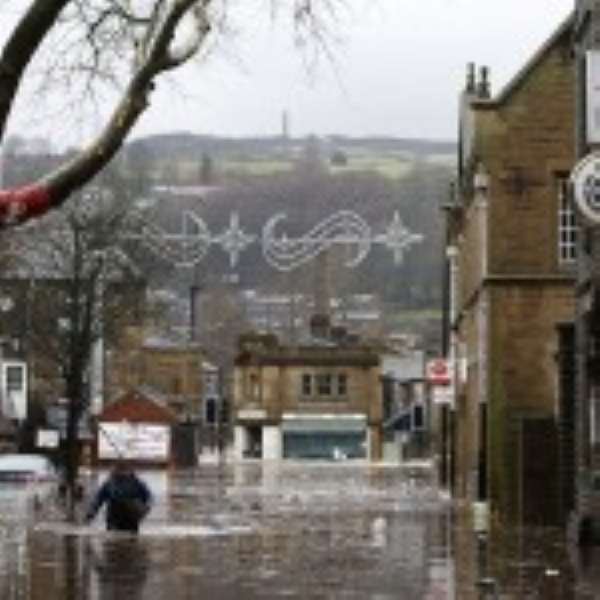 Hundreds of people fled their homes after torrential rain triggered flooding in towns across Lancashire and West Yorkshire, and dangerously high waters even reached the cities of Manchester and Leeds.

The Met Office issued two of its most serious, red weather warnings – indicating a danger to life – for the area and warned that up to five inches of rain could fall over the weekend. In addition, the Environment Agency (EA) issued 31 severe flood warnings – which also signal danger to life – as well as hundreds of standard flood warnings, which mean that immediate action is required.

David Cameron was expected to chair a conference call of the government's emergency Cobra committee on Sunday. “My thoughts are with people whose homes have been flooded,” he said in a statement.

In Leeds a severe flood warning was put in place for the city centre, with the river Aire expected to reach a record peak on Saturday night. The EA said it was due to “significant impacts to infrastructure and risk to life in the area”.

Police advised between 300 and 400 people to evacuate in York by the rivers Ouse and Foss. The Environment Agency said pumps in the Foss barrier were at risk of electrical failure due to water entering the building and a decision had been taken to lift the barrier.

York city council said an emergency meeting had been held and the river Ouse was expected to peak metres above normal summer levels on Monday afternoon.

The Met Office said the worst-hit areas would see very little rain on Sunday: 1-2mm at most in the late afternoon.

In one incident believed connected with the flooding, a gas explosion occurred at around 4.30pm in Radcliffe, Greater Manchester. Saeed Atcha, a local radio presenter, said: “All of a sudden we heard a bang, we looked over to where the sound came from and couldn't see anything.

The day Britain went under UK hit by worst floods-dailyguide

Mytholmroyd in West Yorkshire was among the worst hit

“Then a second later there was another explosion and then a big orange beam lit up the sky, like a flash. It was very, very scary. Everyone was looking around in a state of shock. A police officer shouted 'Get back into your house, there has been a gas explosion.' Two or three minutes later the police officer jumped into his van and drove away.”

Atcha said he understood that the explosion had been caused by the flooding. It occurred right next to the river Irwell, which has burst its banks. He added: “It is going to be a very dark and miserable evening. It seems like the area is on lock-down.”

Areas such as Cumbria, which escaped the worst of Saturday's downpours, could still be hit by further flooding, forecasters added. Lancashire Fire and Rescue Service said it had been called out to around 350 incidents and had rescued 50 people. All of its boats and fire engines were mobilised, an official added.

Locals described some of the flooding as the most severe they had ever seen. One of the worst-affected towns was Whalley, in east Lancashire. It was flooded two weeks ago but was completely swamped when the river Calder burst its banks. Residents were evacuated by rescue boats. Kellie Hughes, a local hairdresser, said the flooding was “a million times worse” than a fortnight ago. “It's just horrific, really bad. There are no more sandbags anywhere. People are panicking.”

In Padiham, which is also on the Calder, fire crews had to evacuate their own station after river water poured in. And in Summerseat, Greater Manchester, the Waterside, a 200-year-old former mill and pub – closed for some time – collapsed into the Irwell and was swept away by the raging water.

At the same time, more than 10,000 homes in Rochdale, Greater Manchester, and Lancashire lost their electricity supply after flood waters surged into a local substation. Electricity North West said its teams were working to get power restored but were doing so in “extremely difficult conditions”. It warned that some properties might be without power until Monday. Flood defences at a number of its substations had been breached, it said, and engineers were working round the clock to restore power.

Greater Manchester Fire and Rescue Service tweeted: “In the last 24 hours we've had over 400 calls, with more than 300 of them flood-related. Our crew and hearts go out together to those affected.”

Numerous sporting events across the region were cancelled, and the M62 in Greater Manchester was closed after a sinkhole opened up on the motorway between junctions 19 and 20. “When the road surface experiences rainfall like we've had today, even a slight change in temperature can cause weakness in the road surface,” said a Highways Agency official. “We've got engineers on site investigating.”

A spokesman for the Local Government Agency said councils had pulled out “all the stops” to find accommodation for people made homeless by flooding. “We also ask that residents check on frail and vulnerable neighbours to make sure that their homes haven't been damaged and that they are warm and comfortable,” he added.

However, the Liberal Democrat leader, Tim Farron, said that the government had to do more to help people. “Part of its response must be to look again at the swingeing cuts to departments like Defra [Department for Environment, Food & Rural Affairs] that will be needed to help communities back on to their feet.”