Despite promise to end Encephalitis and other NTDs by 2030, why is action missing? 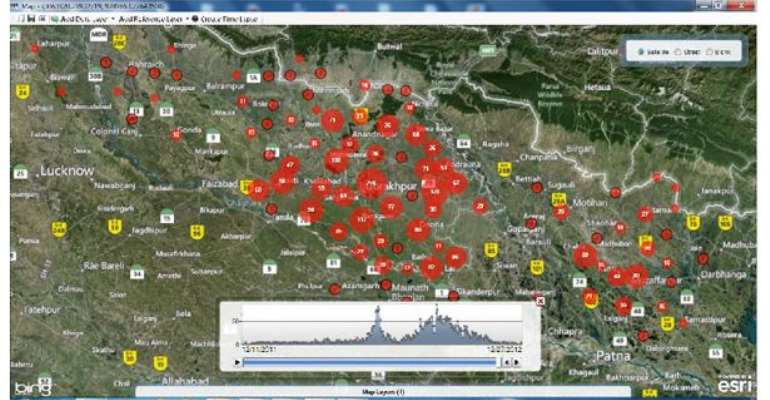 (CNS): Indian government along with other governments of UN member countries had adopted the Sustainable Development Goals (SDGs) at the 70th UN General Assembly in New York in September 2015. One of the SDG targets (3.3) promises that "By 2030, end the epidemics of AIDS, tuberculosis, malaria and neglected tropical diseases (NTDs) and combat hepatitis, water-borne diseases and other communicable diseases." Encephalitis, one of the NTDs, continues to severely impact under-15 year old people with very little well-coordinated response to contain, and eventually eliminate it. Why?

Seasonal, pre- and post-monsoon, encephalitis epidemics in under-15 years old have ravaged India for more than 35 years. Killing 1000 under 15-year olds between UP, Bihar and Assam alone, disabling 3000, causing acute sickness in 5000 and if it is predominantly waterborne then carried by 5,000,000 per year is the story up to now. Both in terms of research, strategic planning, policy and implementation the response has been insufficient and fragmented.

IS RESPONSE DISPROPORTIONATELY WEAK TO THE EPIDEMIC?

Numbers refuse to relent and slowly we, the politicians, the bureaucrats, the technocrats and the media are becoming habituated, accepting it as the fate of the poor and making this fait accompli a necessary part of their lives. At all places the paralysis is similar. When we know it is coming we, a small number responsible for fighting it "David’s equipped with stone slinging Gulels (sling)" face the Goliath with brave statements like "this time we will do the best ever". Some may even fudge and confuse data to prove to their point and some heavy weights loudly air their opinions even without data on the basis of their unpublished experience.

In a typical fire-fighting mode there is a flirt of uncoordinated, fragmented confused activity in small bureaucratic and technocratic groups in affected states and then, after the ravage, the customary thanks that it is over and now is the time to sleep and we will certainly do something better next year. Sometimes somebody for example the National Commission for Protection of Child Rights in 2012 lambasted the Uttar Pradesh government for its ‘casual’ response to the rising death toll from Japanese Encephalitis (JE) and acute encephalitis (AES) in the eastern districts of the state but the blast falls on deaf ears, on a Government famous for its plurality, for the blame is shared by everyone, nobody is held accountable and 37 years have passed in this insufficient uncoordinated action.

WHERE IS SCIENCE IN THIS?
Where are the age old established methods of Epidemiology to study the distribution and determinants of disease? The answer is, in the back seat, unsung and considered unimportant by the decision makers. That is the reason of the response falling apart and being ineffective. No thinking before acting.

In preventing the disease the vector borne Japanese Encephalitis positive in less than 5%, the waterborne other unidentified biological infective agent probably accounting for the rest and theories of toxicity by Litchi chinensis selling pre-monsoon in Himalayan foot hills, or heat and humidity theories have to be considered, prevention strategies developed and thus the preventable suspect etiology prevented. Till the exact agent, host and environment factors are identified by credible research a shot gun approach has to be strategized to decrease the occurrence of the disease.

Next early detection rates have to increase by increasing suspicion index amongst the community and increasing sensitivity of screening criteria. Thirdly, by appropriate standards of procedure (SOP) based response pre-hospital in the home and during retrieval and decreasing distance to final management to achieve decrease in response time affects the most important determinant of outcome. Finally, follow-up and management of disabled has also to be factored into the strategy of a comprehensive response.

The crux of any strategic planning is that the normal to infected, infected to diseased, infected to carrier and diseased to disabled or dead arms have to be weakened and the disabled rehabilitated just allocating resources doesn’t off burden the system from its responsibility to mount a sufficient response.

The data was collected on tablets or mobiles from the residence of patients of AESJE during 2012 and later during 2013, 14 and 15 on a well-designed pilot tested data collection instrument. The position of mobile in terms of latitude and longitude was transmitted from the residence of patient to the database on the server through the net. Historical Data was obtained by the courtesy of the UP Government of 2009 and 10 and latitude and longitude values were found and fed into the data through addresses using Epi-info map software.

Perusal would reveal that the number of cases remained nearly constant over the years though JE positives decreased from 12 to 6 percent between 2009 and 2011. The proportion affected across districts was also similar suggesting that populations were not developing any immunity against the unknown agent of AES though vaccination against JE were probably causing decrease in JE.

The epidemic is limited in the south by the river Saryu though it crosses the Gandak into Muzzafarpur on 7th May 2012 to get 2 cases, spreads north to it on 27th and gets into a full blown epidemic by 13th June, the daily rate crossing 50 cases per day, starts subsiding by 15th June and by 7th July the original rates of about 5 per day have returned. This is premonsoon. The later post monsoon curve beginning 27th July, peaking around 1st September and subsiding near 19th November, is contributed by Gorakhpur. Not crossing the river Saryu, sparing areas south to it and then river Ganges, after Chapra, sparing Patna suggests that it is limited by the fast flowing midstream of these rivers. It crosses the Gandak because it is weakened pre-monsoon. The post monsoon spurt in Gorakhpur is perhaps because of the contamination of surface water sources due to flooding of rivers or use for toilet, bathing etcetra. The spread lends force to waterborne transmission through feco-oral contamination and thus preventable by a. using the midstream to prevent horizontal transmission.

We need to use deflectors to deflect mid-stream, wash of faecal-contamination and thus prevent the horizontal west to east transmission of disease. These relatively low cost interventions were recommended but not implemented by the UP, Bihar or Central Governments.

However, an intensive health awareness drive concentrating with use of soap hand wash in Muzzafarpur decreased the numbers from 1347 in 2014 to 64 in 2015. In contrast the numbers in Gaya where the epidemic mimics Gorakhpur post monsoon, there was no campaign and the numbers remained the same. It is suggested that measures to prevent feco-oral water borne transmission on the north banks of Saryu and Ganges rivers may prevent 1000 deaths, 3000 disabled and 5000 acutely taken sick from this 37 year old devastating encephalitis epidemic in under 15 year olds.