Half the battle won: Need to accelerate roll-out of child-friendly anti-TB drugs 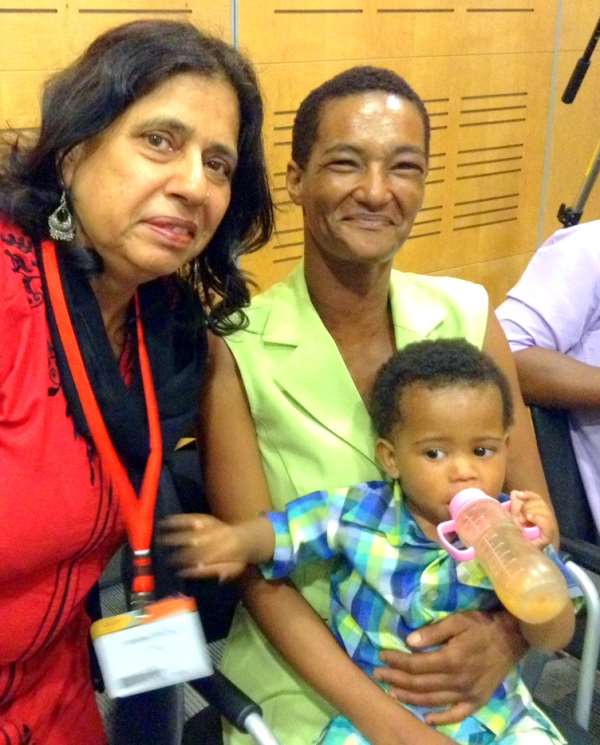 (CNS): Monique Davids, mother of 4 children, lives in Cape Town, the venue of the ongoing 46th Union World Conference on Lung Health (conference theme is 'A new agenda: Lung health beyond 2015'). She is a living example of what it is to be the caregiver for children suffering with TB. The past one year seems to have aged her a lot making her look much older than her 32 years. Her fiance and father of her four children contracted TB which he passed on to his two children - his youngest son Jaden was diagnosed with TB in 2014 at the age of two months, along with his 3 years old sister.

In November 2014, after being on TB treatment for 3 months, Jaden underwent the 1st of the two operations, to drain the water from his brain due to TB meningitis. The operation blinded him temporarily, but he got back his vision after 3 weeks.

This was the beginning of a long ordeal for Monique. Her fiance had already lost his job because of his TB. Sharing her story of struggle with CNS (Citizen News Service, citizen-news.org), Monique said, “I too lost my job of a school teacher because I had to take care of two of my children with TB. Jaden was in the hospital for 8 months. I shuttled between hospital and home tending to my sick son and daughter. From morning till evening I would struggle to look after my children. Giving medicines to my daughter, as well as to my son, was a huge issue. They were so sick and it was so difficult to give them the medication that I began to lose hope.”

“I would crush the adult-sized tablets, mix them with everything - from formula to juice to yoghurt - to make them more palatable. But still my daughter would refuse to eat them. I used all sorts of tactics, just to get those lifesaving pills down her throat every day. I would bribe her with money, threaten her to send her to the hospital if she did not eat her pills, scare her that the police will come and take her if she did not eat them. It was an ordeal for me not only financially but emotionally as well.”

Thankfully, both her children are cured of the TB now. But the effect of TB meningitis still lingers in Jaden. When I met the mother-son duo at the ongoing 46th Union World Conference on Lung Health in Cape Town, Jaden clung to his mother, as he is still unable to walk even though he is one and a half years old. His mental development also is slow.

For Monique, even as life is limping back to normal, the struggle is far from over. “My husband is not working. I get some sustenance grant from the government. I have to apply for a grant for disability of my child. The hospital has given me the necessary papers, but now I have to apply for the grant. Even though I would like to go back to work, I cannot because of Jaden. His TB is totally gone now, but I do not know how much he will recover from the meningitis. I do hope and believe that one day he will start walking. I still take him to the clinic for his monthly check ups”.

“I know how much problem TB causes in the community and especially to mothers. It would be so nice to have simpler and shorter treatment regimens. The new one pill a day formulation will be a real boon for children with TB as well as for their caregivers. I can say from personal experience how tough it is to make the children eat the pills. I have seen many parents in my community lose their children, as they just could not get them to eat the bitter pills. TB is already such a long struggle for families; with these new simpler medicines, at least the treatment does not have to be such an ordeal anymore.”

POLITICAL WILL, INVESTMENT MUST TO ACCELERATE ROLL-OUT

More than 1 million children get sick with TB every year and 400 children succumb to it every day. Also a whopping 67% of those who suffer from it are not diagnosed or treated. With the advent of new palatable fixed dose combinations (FDCs) to treat paediatric TB, treatment adherence, and hence cure rate, is bound to increase. But this is just half the battle won. While Dr Mario Raviglione, Director of the Global TB Programme at WHO has promised to hasten the process of pre-qualification of the FDCs and its inclusion in the essential medicines list, countries will have to have the political will and investment to roll out the new medication.

For the likes of Monique, the wait could be much longer, as South Africa has very strict laws regarding registration of a new medicine, and it is likely to take a long time before this formulation is rolled out in the country. It is high time for countries to bend the rules if that will result in preventing needless deaths in children due to TB.