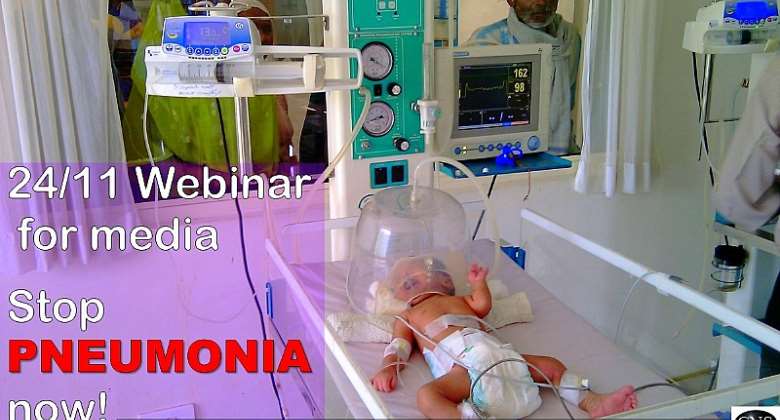 Video recording of the interview is online at: https://www.youtube.com/watch?v=ygwxg1bxN4E

Despite being preventable, pneumonia continues to be a top killer of children under five. It also wreaks 'breath-taking’ havoc in the lives of adults, particularly the elderly, and people living with HIV. According to the 2015 Pneumonia and Diarrhea Progress Report released recently by the International Vaccine Access Center (IVAC) at the Johns Hopkins Bloomberg School of Public Health, a projected 5.9 million children around the world will die in 2015 before reaching their 5th birthday.

Pneumonia is responsible for 16% and diarrhea for 9% of these deaths, making them two of the leading killers of children worldwide. Pneumonia alone killed an estimated 922,000 children in 2015 with 99% of these childhood deaths occurring in developing countries.

In a webinar ‘Every breath counts: Stop pneumonia now’ organized by CNS (Citizen News Service), Dr Amita Pandey, Professor of Obstetrics and Gynaecology at KG Medical University, lamented that incidence of pneumonia in children under five is estimated to be about 156 million new episodes each year worldwide, of which 151 million are in the developing countries. With 2,97,114 children’s deaths due to pneumonia and diarrhoea, India tops the list of these countries. According to her mortality due to childhood pneumonia is strongly linked to malnutrition, poverty, and inadequate access to healthcare services [webinar recording is online at: https://www.youtube.com/watch?v=ygwxg1bxN4E).

Pneumonia is a form of acute respiratory infection that affects the lungs. It could be caused by bacterial, viral, and fungal infections. Streptococcus pneumoniae and Haemophilus influenzae type-b (Hib), are the two leading causes of bacterial pneumonia in children. It is also caused by respiratory syncytial virus and Pneumocystis jiroveci, particularly in HIV-positive infants.

The illness can be caused by bacteria and viruses already present in the body, or it can be transmitted from an infected person through droplets in the air following a cough or sneeze, or through blood, such as during childbirth.

When a person has pneumonia, the air sacs in the lung, called alveoli, are filled with pus and fluid, which limits oxygen intake and makes breathing painful. Symptoms of viral and bacterial pneumonia are similar. In children under 5 years of age, who have cough and/or difficult breathing, with or without fever, pneumonia results either in fast breathing or retraction, rather than expansion of the chest during inhalation. Wheezing is more common in viral infections. Other symptoms include fever, phlegm producing cough, fever, sweating and shaking chills and fatigue.

The antibiotic of choice is amoxicillin dispersable tablets that can treat pneumonia for less than US$0.50 and avoid a majority of pneumonia deaths. Hospitalization is recommended only for severe cases of pneumonia. Yet only 60% of caregivers seek out adequate care for suspected pneumonia cases, and only one-third of pneumonia cases are addressed with the proper antibiotic treatment.

Pneumonia is both preventable and curable. Providing immunisation against Haemophilus influenzae type-b, pneumococcus, measles and whooping cough, is an effective means of preventing pneumonia. The Global Coalition Against Childhood Pneumonia estimates that increased vaccine coverage in the world's 73 poorest countries could prevent 2.9 million deaths and 52 million cases of infection attributable to the disease. Economically, such a move would avoid $51 billion dollars in health costs and productivity losses.

Apart from access to vaccination and appropriate antibiotics, Dr Pandey also insisted upon other equally important factors for prevention and control of childhood pneumonia. These include exclusive breastfeeding for the first 6 months of life; proper care of the infant; adequate maternal nutrition; & prevention of low birth weight; good sanitation and hygiene practices such as regular hand washing, and eliminating parental smoking and indoor air pollution.

Talking about pneumonia in neonates, Dr Pandey informed that neonatal pneumonia could be acquired during pregnancy from maternal infection, or during delivery by passage through an infected birth canal, or after delivery from contact with an infected mother/healthcare staff/hospital environment. Mortality rate of early onset pneumonia acquired antenatal or intra-partum (in <3days old infants) is 3%-40%; while that in late onset pneumonia, usually acquired from the environment in preterm >3days old infants is 2%-20%. Fatality rate is 2 to 4 times higher in LBW infants than in full-term infants.

GAPPD scores have also been developed—they are a calculated average of countries’ coverage levels for the ten GAPPD indicators, using the most recent data available. These GAPPD scores are used to assess and compare progress over time in the highest-burden countries with the greatest number of pneumonia and diarrhea deaths in children under the age of five years.

Talking about India, Lois said that even as the country ranks 1st globally in terms of pneumonia and diarrhoea deaths, there has been some political commitment from the government to immunize all children within the next 5 years and also to increase efforts for monitoring of data and progress. However, many challenges remain to be overcome. There is still very low coverage of Hib vaccine, particularly in high burden states, as well as low levels of access to appropriate treatments.

For sustainable development in the post 2015 era, governments, communities and families will have to make all out efforts to protect our future generation from a disease that is curable as well as preventable.