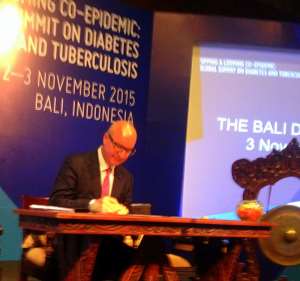 (CNS): After convening a two-day summit this week in Bali, the Indonesian Ministry of Health, together with the International Union Against Tuberculosis and Lung Disease (The Union) and the World Diabetes Foundation, today signed the Bali Declaration, uniting more than 100 global health officials and experts behind a global campaign to fight the twin scourge of TB and diabetes. Bi-directional screening is a key component of the Bali Declaration, which aims to bring the co-epidemic to the attention of governments across the globe.

THE BALI DECLARATION STATES THAT:

* Tuberculosis and diabetes represent two of the greatest global health challenges of our time, and their convergence globally represents a looming co-epidemic,

* Based on what we have learned from past co-epidemics, particularly TB-HIV, we must act early and decisively to avoid large numbers of avoidable deaths…

“Today we are committing to take action to stop this double threat,” said José Luis Castro, Executive Director of the International Union Against Tuberculosis and Lung Disease (The Union) and Chair of NCD Alliance. “We have evidence and we have practical solutions, such as providing TB patients with screening for diabetes and vice-versa. In countries facing this challenge, health systems need to take these solutions off the shelf and put them to work” added Castro while speaking with CNS (Citizen News Service).

Diabetes weakens the immune system, and triples a person’s risk of getting sick with TB—which killed 1.5 million people in 2014, according to a new World Health Organization report. Today, 387 million people are affected by diabetes, with 77% of cases in low- and middle-income countries where TB is prevalent. Diabetes is projected to affect 592 million people by 2035, which experts project will only fuel the global TB epidemic.

“Healthcare systems must prepare to deal with this challenge, particularly in low- and middle-income countries where the challenge is most severe,” said Anders Dejgaard, Managing Director of the World Diabetes Foundation. “It can be done. Leadership in training and advocacy will be essential to ensure that healthcare professionals are equipped to diagnose and take care of these two diseases as they increasingly appear together in the same patients.”

The Declaration was issued on the heels of a new WHO report showing that due to TB’s slow rate of decline worldwide relative to HIV/AIDS, TB has overtaken HIV as the leading cause of death from an infectious disease.