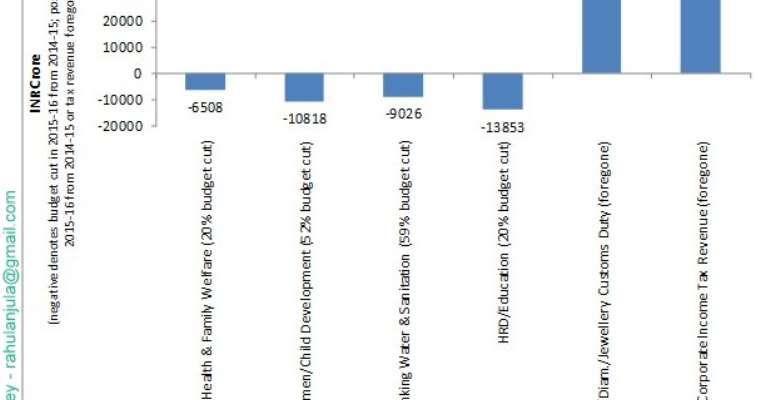 (CNS): Partial results of two important official surveys were released recently. They point to dismal living standards of India’s rural population and rising cost of health and education beyond the means of ordinary citizens. In spite of this reality the Modi government is undermining the public health and public education sectors among other social infrastructures, as reflected in its funding priorities. This does not bode well for future living standards of India’s ordinary citizens who are already struggling with meeting basic needs.

The Socio Economic and Caste Census 2011 (SECC), released by the Finance Minister, reported a grim reality of rural India’s state of development. 56% of rural households are landless and 30% are both landless and live off casual, manual labour. Manual labour as major source of income is the most common form of deprivation. The second most common form of deprivation is literacy with 23.5% of rural households having no literate adult above 25 years of age. 25.7% of rural population earns below Rs. 816 per capita per month or Rs. 27 per capita per day.

Although this was Planning Commission’s definition of poverty line, the real poverty line – an income level below which a person cannot avail of essential livelihood inputs such as food, water, basic health care, clothes, housing and basic education – is likely to be much higher.

Early results of The National Sample Survey Office (NSSO) report published in some of the leading dailies show that in the past seven years the cost of health and education has increased and is forcing a lot of families into debt. Both quality and capacity of public hospitals and schools have stagnated and increasing numbers of people are opting for private health facilities and schools which are several times costlier than their public counterparts. For instance the NSSO report indicates that average cost of education in India has doubled from 2007-08 to 2014. This is creating a stressful situation for lower income families who are spending beyond their means on health and education. In a society with deep rooted gender bias against girl children this has added to the momentum of depriving girls of health and education in favour of boys. For instance, one-fifth of girls and half of boys who enrol at the primary level complete higher education.

In the light of results of SECC and NSSO surveys it is natural to conclude that the government must be paying greater emphasis on providing affordable health, water and education services to all citizens of India. As this could be achieved primarily by expanding capacity and quality of public health care and public school systems, one would presume that these must be on the top on government’s priority. The reality, unfortunately, is the opposite. Instead of planning to enhance public health and public education infrastructures, the government has, for the first time in decades, reduced their budgeted funds in absolute terms.

Four important ministries and sectors that constitute bulk of the social infrastructure – Health and Family Welfare, Women and Child Development, Drinking Water and Sanitation, and Human Resource Development (including education) – face a total cut in funds of INR 40,205 crore in 2015-16 budget as compared to 2014-15 budget. This includes both Central Plan fund and Centre’s assistance to State and UT Plan fund.

The government first reduced the 2014-15 budget allocation for Ministry of Health and Family Welfare by 20% (i.e. by about INR 6,500 crore) in a revision in December 2014, and later maintained that reduced allocation in the 2015-16 budget. The budget for Ministry of Women and Child Development has been reduced by 52% or INR 10,818 crore, and that for Ministry of Drinking Water and Sanitation by 59% or INR 9,026 crore. Finally, the budget for Ministry of Human Resource Development, that includes school education, literacy and higher education, has been cut by 20% or INR 13,853 crore. Majority of this cut is in programmes of school education including setting up model schools at Block level.

While on the one hand the government has reduced these four social infrastructure sectors’ budget by INR 40,205 crore, on the other hand in FY 2014-15 it willingly lost INR 75,592 crore of revenue due to incentives or waivers on customs duty for gold, diamond and jewellery, and another INR 62,399 crore of revenue on account of various exemptions on corporate income tax. The Statement of Revenue Impact of Tax Incentives describes these incentives and exemptions as indirect ‘subsidy’ to preferred tax payers. There are several other categories of exemptions but here we mention only these two as they go mainly to the cash-rich companies and wealthy individuals. It is ironical that the government could not find the fund required to keep health and education at the level of 2014-15 budget while it gave away far more by subsidizing customs duty on jewellery and exempting corporate tax.

Such skewed developmental priorities of the government might cause as much or deeper harm to Indian society than the recently highlighted cases of corruption and impropriety on part of some ministers. They might worsen inequality and reinforce structural barriers for low income families to access benefits of growth. Besides depriving the masses of development opportunities they are also likely to undermine ‘make in India’ policy of the government by constraining the supply of healthy, educated and skilled workforce. It is time the Modi government realized its wrong priorities and set them right.