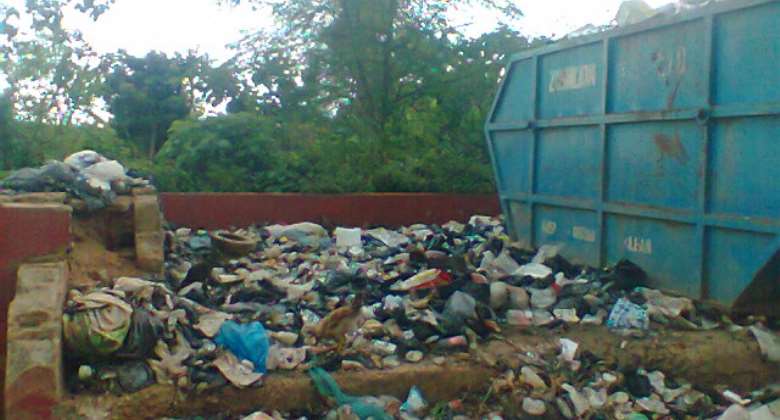 It goes without saying that one of the greatest challenges developing countries like Ghana face and continue to battle with is the issue of effective and sustainable waste management especially in the wake of the high rate of population increase and rapid urbanization. The cities in Ghana namely Accra, Kumasi, Sekondi-Takoradi and Tamale, are worst affected by the waste management problem. The stenches that come out of these solid wastes become a source of worry to many people including tourists from other parts of the world.

The unpleasant smell becomes more irritating immediately after heavy rainfall when the mixed effects of rain and sun impinge on the intensity of the scent. Consequently, most waste management companies, which are supposed to benefit from converting useful resources in our solid waste stream into valuable products, have just become waste collection companies.

In Ghana, Accra alone produces about 2,000 tonnes of waste daily most of which is dumped at disposal sites, but with some ending up in drains to cause environmental havoc such as flooding. Ghana could however take advantage and fast-track moves to turning waste into energy to help combat climate change. Although average annual per capita waste generation in developing countries has been estimated at 10-20 per cent of that of developed countries, studies had shown that the figure was rising in response to economic and population growth.

How Waste Disposal Lead To Emission of Greenhouse Gases (GHGs)

The disposal and treatment of waste can produce emissions of several greenhouse gases (GHGs) which contribute to global climate change. The most significant GHG gas produced from waste is methane. It is released during the breakdown of organic matter in landfills. Other forms of waste disposal also produce GHGs but these are mainly in the form of carbon dioxide (a less powerful GHG). Even the recycling of waste produces some emissions (although these are offset by the reduction in fossil fuels that would be required to obtain new raw materials). When greenhouse gases (GHGs) such as methane, carbon dioxide and nitrous oxide are released into the earth’s atmosphere, they trap infrared radiation from sunlight. This is stored as heat in the atmosphere and can be tied to the increase in the earth’s average temperature, causing what is known as global warming or climate change.

In general, the relative GHG impacts of transport of collected materials from curbside to processing and disposal facilities, and to markets are very small relative to the two types of impacts noted above, and generally represent far less than 1 percent of total impacts. Furthermore, replacement of the current collection fleet over time with alternative fuel vehicles could largely offset the GHG impacts from transportation.

According to the U.S. Environmental Protection Agency (EPA), for every ton of municipal solid waste processed at an Energy-from-Waste (EfW – also known as waste-to-energy) facility, the release of approximately one ton of carbon dioxide equivalent emissions into the atmosphere is prevented due to the avoidance of methane generation at landfills, the offset of greenhouse gases from fossil fuel electrical production, and the recovery of metals.

According to Ghana Environmental Protection Agency, waste prevention and recycling help address global climate change by decreasing the amount of greenhouse gas emissions and saving energy. We therefore urge the government of Ghana to act now by creating awareness on waste prevention and recycling to help address global climate change.