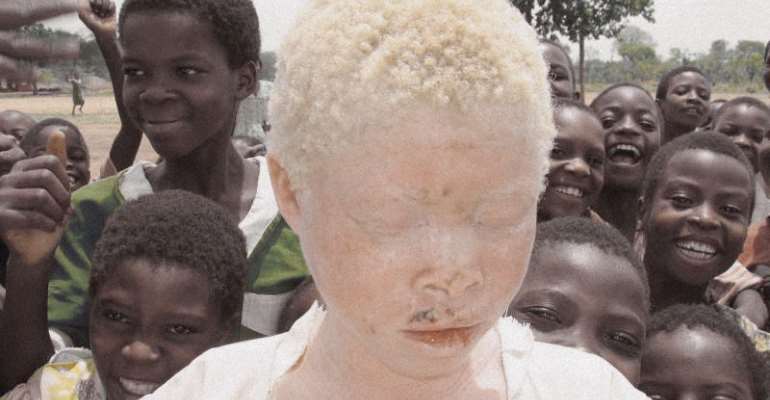 “A person shall not be discriminated against on grounds of gender, race, colour, ethnic origin, religion, creed or social or economic status”, Article 17(2), Ghana’s 1992 Constitution.

A plethora of evidence points to the fact that the physically challenged and other minority groups including albinos continue to suffer discrimination and stigmatisation in clear contradiction to the rule of law and constitutional order that underpins Ghana’s democracy. An instance of high order insensitivity towards the physically challenged was in 2013, when President Mahama’s appointment of Dr. Seidu Dannaa to serve as the Minister for Chieftaincy and Traditional Affairs was met with resistance by a section of chiefs notably, Nana Obiri Yeboah, a renowned Sociologist and a chief who gave spurious reasons against the appointment of a blind person to head the Ministry. Their sassiness was however rubbished when Dr. Dannaa’s appointment was approved by the Appointments Committee of Parliament. In an article titled “ONSLAUGHT AGAINST DR. DANNAA’S MINISTERIAL NOMINATION: a disdain to humanity!”, I commended President Mahama for appointing a blind person to the high office of a Minister - the first of its kind in the history of Ghana. I had hoped that Dr. Dannaa’s appointment was the beginning of an end to public denials and societal annihilation of minority groups in Ghana.

Sadly, the story of Yusif Fatau, the 19 year old albino who has had to quit schooling following discrimination and series of threats to his life is one that makes me conclude that Ghanaians have lost their sense of humanity. Master Fatau has been hounded out of Atebubu Senior High School where he had been recently admitted to study Visual Arts. His decision to quit schooling has been supported by his father because they cannot guarantee his safety in the town following threats that his ‘kind’ of skin colour is an affront to the traditions of the people. What I find strange is that the Atebubu Traditional Council (ATC) has denied speculations that it has banned albinos from the area. Admitting that the tradition of banishing albinos in the area had existed in the 18th Century, the Twafohene of the Atebubu Traditional Area, Nana Ofori Yeboah, has indicated that this outmoded tradition has been long ago been done away with. He is alleged to have said persons who discriminate against Master Fatau should stop else they would be dealt with.

Whilst commending the ATC for this declaration, it is worth asking that what prevents the ATC from holding themselves responsible for the safety and schooling of Master Fatau in the community since the series of attacks and threats are driven by traditional apathy towards albinos? Doing so will dispel the notion that the ATC is anti-albinism. I would like to see what practical steps the ATC will take to ensure that the gentleman gets back to school and enjoys his freedom just like his fellow classmates. It is not enough for the ATC to denounce the threats whilst they do nothing to ensure that the boy gets back to school.

In 2011, JoyFm’s Seth Kwame Boateng carried out a documentary report on albinos titled ‘Discrimination of Colour’ which revealed harrowing levels of discrimination and stigmatisation of albinos in Ghana. Since the damning documentary was aired, nothing has been done to protect and safeguard the rights and dignity of albinos in a country that prides itself as the beacon of hope for democratic governance in the sub-region. In a similar fashion, the media has brought to the fore Master Fatau’s story which is a classic case of abuse and discrimination, yet society is unconcerned and human rights institutions and advocates have so far remained mute.

Article 17(2) of the 1992 Constitution unambiguously denounces any form of discrimination. In seeking to properly define the operational word ‘discrimination, Article 17 (3) provides that; “For the purposes of this article, "discriminate" means to give different treatment to different persons attributable only or mainly to their respective descriptions by race, place of origin, political opinions, colour, gender, occupation, religion or creed, whereby persons of one description are subjected to disabilities or restrictions to which persons of another description are not made subject or are granted privileges or advantages which are not granted to persons of another description”. Per this definition, Master Fatau has been discriminated against because of his colour and he needs the urgent intervention of the State to come to his aid.

We do not need legal luminaries to help identify that Master Fatau’s case is a classical breach of his fundamental human rights in a country of his birth and legal residence. That is what bothers me, folks. The public display of discrimination against this young man is most annoying and the insidious nature of the discrimination as coming from the traditional authority is must unfortunate.

Famous Albinos
Whoever thought albinos are unfit to live anywhere in the world must himself be a social misfit! This is because the world stage has seen great personalities with albinism. Here in Ghana is a legal luminary called Commissioner Moses Foh Amoani who recently served on the 2014 Brazil World Cup Commission of Enquiry. The astute lawyer cum sports analyst has demonstrated impeccable dexterity in his practice much to the admiration of all. Moses Foh Amoani doubles as a Senior Law Lecturer at the Ghana School of Law. His academic laurels and monumental contributions to law practice, education and sports just to mention a few should be enough to send the right message that albinism is nothing unusual.

Outside Ghana, there are several other famous albinos who have accomplished feats unthinkable of human endeavours. The renowned Malian musician Salif Keita was once ostracized by his community because albinism was thought to be a bad omen. However, he fought through discrimination to earn the prestigious tribute as the ‘Golden Voice of Africa’. The international community continues to celebrate his musical exploits.

Professor William Archibald Spooner was a distinguished linguistic scholar at Oxford and he was the progenitor of the linguistic phenomenon called spoonerism which plays on words. Not only was he an academician, he also served as a priest with the Church of England in 1875. In his days, Spooner was said to have been the best brain at Oxford and Cambridge colleges relative to his scholarship, devotion to duty and sense of wisdom. He was an albino. Albinos have also found their way on to the throne of kingship in great nations. Emperor Seinei was the 22nd emperor of Japan. Another albino, King Edward the Confessor of England had a successful tenure in England. The model prodigy Connie Chiu did not allow albinism to steal her pride and talents away and she rose to become the world's first albinistic fashion model. These few examples are more than enough for our society to shed off the primitive lenses with which albinos are viewed.

Albinism & Social Exclusion
Since the story of Master Fatau broke out in the media, there has not been any serious attention to his plight despite the fact that this is an issue that bothers on human rights and social injustice. It is an act of social exclusion. Unfortunately, the many social media activists on Facebook, WhatsApp and the likes have all been silent because the matter is of no relevance to them. Master Fatau’s case has not found space on the list of ‘important’ subjects for radio and television discussions that have tended to be only interested in the dramas of political nuisance in Ghana.

Our collective silence on this matter and the many other several issues of discrimination and stigmatisation against minority groups is most unfortunate. Master Fatau’s case is so sensitive and it must attract public outrage. I should expect to see the likes of Commissioner Moses Foh Amoani, Hon. Nana Oye Lithur and the many other human rights lawyers to crusade against how this young man has been treated by his own people. The Ministry of Education must also intervene to ensure that Fatau’s education is not truncated.

We have a way of telling the world that we are endemically backward. If there be anything that is primitive, then the treatment of Master Fatau is one such classical example. Let us make Ghana a safe place for all persons of race, colour, ethnicity, creed, gender and status. Let us decry the discrimination against Master Fatau with the same zeal with which we raised our voices against South Africa’s xenophobic acts a few months ago. Let us show that we are truly humans!