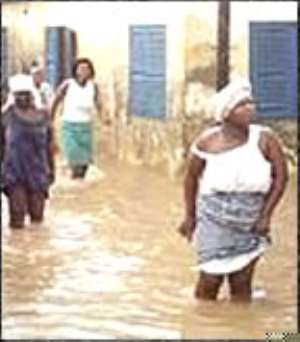 Climate change is already beginning to change the lives of Ghanaians. Seasons are shifting, temperatures are climbing and sea levels are rising.

A highly variability and unpredictable climate has always been experienced in the Northern part of Ghana where the is occurrence of droughts which often occur in the same area within months and poses a threat to food productivity where production is mainly rain fed and decreased yield due to loss of lands and creates uncertainty about what and when to plant, people at risk from hunger, decreased fish stock due to increasing temperatures and fall of net revenues from crops. It has being reported that high temperatures in Ghana has led to low cereal yield mainly due to a reduction in the growing period and increase in evaporation rates.

The question is “how much is the government effort in creating awareness on this climate change impact to the life of the vulnerable?”

Worries such as fame, power, politics, money, high salary and economic well being have all blind folded the media and the government attention on the need to create awareness on climate change impact awareness on the livelihood of Ghanaians. The is awareness creation on the recent outbreak of Ebola in some West African countries like Ghana, on HIV, tuberculosis, hepatitis B but none is seen when it comes to climate change impact.

I therefore call on the government of Ghana to engage with partners and stakeholders abroad, the need for national climate change impact awareness in cooperation with major stakeholders and individuals from all walks of life and organize a workshop for stakeholders.

I also urge the government of Ghana to act now to encourage climate change impact awareness in our communities if not climate change will rapidly alter the lands and waters which we all depend for survival.