Democracy is not the Panacea for Development: My Tribute to Lee Kuan Yew 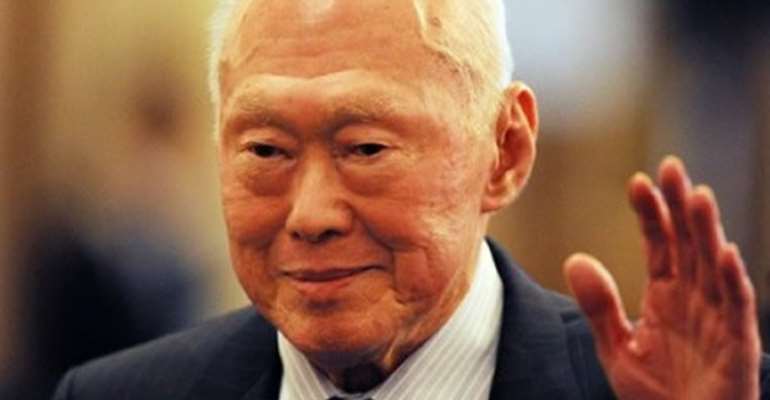 As I was surfing through the web, I chanced on a news item breaking the news on the death of Singapore's founding father, Lee Kuan Yew but instead of soaking tears for this man as custom demanded when someone joined the ancestral world, I rather felt proud for this true hero and I could hear myself whispering that “bravo! we are proud of you”.

I suddenly dismissed the renowned academic, Charles Abugre's suggestion that, “Dead politicians are different things to different people and that, their good is usurped, their failures exhumed and magnified as appropriate and in accordance with creed.” This certainly cannot be the case with Lee Kuan Yew.

The death of Lee Kuan Yew shook the foundation of the world and the media as usual, begun to trumpet what he stood for. Tributes begun to pour from around the globe, eulogizing this national hero who transformed Singapore from a small port city into a wealthy global hub. UN Secretary General Ban Ki-moon said he was "deeply saddened" by Mr Lee's death. US President Barack Obama described him as a "giant of history". The Chinese foreign ministry called him "a uniquely influential statesman in Asia".

But the big question is, why would the world celebrate a man whose leadership was criticised for his iron grip on power?? A man who was criticized for his uncompromising stance against democracy and stifled press freedom?

Even after he could not effectively perform his mandate due to old age, he relinquished his position to his son, now Prime Minister Lee Hsien Loong. And so the multi-million question still remains that what was so special about the legacy of a man whose political ideologies were perceived as the exact opposite of the people who are now singing his praises?

Singapore is one of the world neatest countries and even citizens cannot even chew gum in public yet a showpiece of rapid economic transformation.

Kwame Nkrumah's Ama Ghana was in the same development plane with the likes of Malaysia and Singapore after independence, but today, Ghana's has nothing to show except the empty self-fulfilling clique that “Ghana is the gateway to Africa and a beacon of democracy”.

Having organised six successful elections since 1992 and received accolades from the international community, Ghana pride herself in Africa as a beacon of peace and democracy.

Interestingly, democracy has often been tagged as the first crack of the seemingly impregnable wall of industrialization and development, but is democracy really the trick to development?

Ghana's self-imposed tag as the “gateway to Africa and a democratic cockpit,” to borrow words from Chinua Achebe, is no more than the power of a child over a goat that was said to be his. As long as the goat was alive it could be his; he would find it food and take care of it. But the day it was slaughtered he would know soon enough who the real owner was.

Ghana still wallows in so many myriad of economic challenges including the infamous dumsor which has compelled some people think that Ghana would have been better off if the country was still under colonialism.

I have always had my reservation about this thing called “democracy”. In my opinion, African countries needed selfless long-serving dictators like Lee Kuan Yew in order to accelerate the wheels of development

Libya under Gadhafi witnessed, massive infrastructural development especially his housing policy which ensured that even children who were yet to be born in ten years' time had housing facilities.

During the 1950's under the leadership of King Idris, Libya was among the poorest nations in the world with some of the lowest living standards. From the early 1980's until 2003 Libya were placed under heavy sanctions by the US and UN which had the result of strangling Libya's growing economy leading to an inevitable smothering of development projects and social welfare schemes.

Despite this the Libyan Arab Jamahiriya headed by Muammar Gaddafi achieved the highest living standard in Africa. Libya also invested heavily in African development initiatives. The funding of infrastructure projects as well as African political and financial institutions was aimed at developing
Africa independently, and combating the economic exploitation of African resources and labour by outside powers.

Gadhafi had transformed a desert-proned country into one of the richest country in Africa where until the ousting of Gadhafi, Libya became the US for many young people in other Africa countries notably, Ghana and Nigeria, who sought to better their lives by seeking greener pastures there.

The number of people who perished their lives on the Sahara desert in their quest to travel to Libya to seek for greener pastures would beat human imagination, yet the west and their cohorts ostensibly found everything wrong with this man on the bases of their so-called human rights and democracy.

The irony however is that this was the same people who perpetuated slave trade in Africa and used dozens of our grandparents as mouthwatering feast to whales and fishes in the Atlantic Ocean, but today, they want to force their so-called democracy and human rights down our throat as the panacea to our woes.

Meanwhile Ama Ghana is malnourished and is inching closer to her graveyard owing to wounds inflicted on her by corrupt officials ranging from the passengers to the bus driver, yet we continue to hammer and take pride in this so-democracy. What is the meaning of democracy to a hungry man?

Ama Ghana is rich in talents, human and natural resources but her children have now formed what is called “Graduate Unemployment Association,” her inflation figures are sky-rocketing, her children are dying from simple preventive disease such as cholera, interest rate is ballooning and to cap it all, her children are now begging for pittance from a so-called IMF.

His co-debater, Prof. Agyemang Badu Akorsah, however, insisted that the likes of Singapore and Malaysia had developed because the west allowed them to use their brains since they had no natural resources.

But my interest in the debate stemmed from a statement by Dr. Amoako Baah that people by nature are bad, and therefore strict policing must be put in place to check behaviors.

The symptoms of this beast called “corruption” is staring us on the face in all facets of our national lives but what do we see? Several people were indicted for various corrupt practices ranging from the Wayome unlawful judgment debt payment, the GYEEDA scandal and the rest, but interestingly,the institutions that are supposed to punish these people are reacting with “kid blows”.

According to the Forbes.com, the family fortune of Hosni Mubarak of Egypt was $70 billion. In the same vein, the net worth of General Ibrahim Babangida, a former military dictator of Nigeria, was $12 billion whilst that of Omar al-Bashir of Sudan was $9 billion.

The personal fortune of Daniel Arap Moi of Kenya, according to forbes.com, was $3 billion whilst the net worth of Isabel dos Santos, daughter of Angola's President, stood at $3.1 billion

Meanwhile, Forbes.com further revealed that, for a perspective, the total or combined net worth of all 43 US presidents-from Washington to Obama- was only $2.7 billion. (See http://theatln.tc/1uZ8wMD)

Ghana and by extension Africa still commanded enormous wealth, talents and human resources but corruption is impoverishing the continent and therefore it is a high time Africans stopped blaming colonial imperialists for their backwardness.

The hard truth however is that, the west is as guilty of corrupt practices as the African leaders because the west have provided safe haven where African leaders comfortably save their booties from their corrupt deals. The only difference between corrupt leaders in the west and that of Africa is that when a politician in the West engaged in corrupt practices, the “booty” is invested in the same country and therefore the money stayed in the country but the contrary could be said of the African corrupt leader.

To put it mildly, Africa leaders have failed because they have refused to play the kpa kpa kpa game.

Vetting: Some NDC MPs were compromised; it was a shameful, p...
8 hours ago