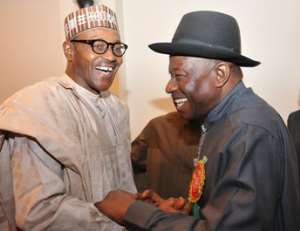 As Nigerians prepare to vote in the 2015 general elections, Afrobarometer survey findings show that support for democracy remains the majority view, though weaker than two years ago and tempered by high levels of dissatisfaction and low approval ratings for elected officials.

More than half (57%) of citizens say Nigeria is a democracy “with major problems” or not a democracy at all.

Elected officials at all levels, including the president and members of the National Assembly, receive weak approval ratings and are perceived by a majority of citizens as corrupt.

Most Nigerians do not consider the ballot an effective means of removing leaders who fail to perform in office and do not see voters as playing a leading role in holding political officials accountable.

Key findings
1. Two-thirds (65%) of Nigerians favour democracy as the best form of government, a decrease from 69% in 2012, and one in five (21%) say non-democratic forms can sometimes be preferable (Figure 1).

4. Ahead of the elections, key political office holders receive weak approval ratings on their performance (Figure 3), and public perceptions are characterized by low levels of trust and high levels of perceived corruption.

5. Other election-related findings are detailed in Afrobarometer Dispatch No. 18, available at www.afrobarometer.org, including findings on term limits, checks on political power, and perceptions of corruption and trust in public officials.

Afrobarometer
Afrobarometer is an African-led, non-partisan research network that conducts public attitude surveys on democracy, governance, economic conditions, and related issues across more than 30 countries in Africa. Five rounds of surveys were conducted between 1999 and 2013, and Round 6 surveys are currently under way (2014-2015). Afrobarometer conducts face-toface interviews in the language of the respondent's choice with nationally representative samples.

Nigerians between 5 December 2014 and 19 January 2015. The sample covered 33 of Nigeria's 36 states, as well as the Federal Capital Territory. It was not possible to conduct interviews in three states in the North East zone – Adamawa, Borno, and Yobe – due to unrest in the region, so substitutions of sampling units were made from neighbouring states in the same zone. Thus, each of the country's zones is represented in proportion to its share of the national population. A sample of this size yields results at the national level with a margin of sampling error of +/-2% at a 95% confidence level. Previous Afrobarometer surveys have been conducted in Nigeria in 2000, 2001, 2003, 2005, 2007, 2008, and 2012.