From Adversity To Prosperity 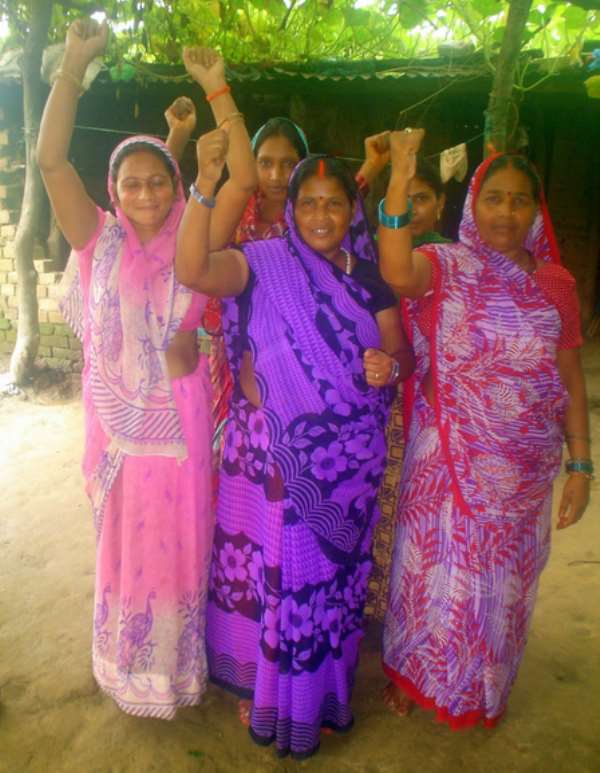 (CNS): It is not uncommon to hear about tales of migration from villages to cities in search of greener pastures. But, 22 years ago, a quirk of fate trans-located 42 years old Preeti from the city of Gorakhpur to a village called Bantaaniya. The youngest of 5 siblings—3 sisters and 2 brothers—Preeti grew up in Gorakhpur, a town in east UP, India. She had a comfortable childhood as her father had a government job in the railways.

She had never felt that her parents discriminated between sons and daughters until, soon after her mother's untimely death, she was married off in a rural family, much against her wishes.

LIFE AFTER MARRIAGE
Preeti recalls the trials and tribulations, which her marriage at the tender age of 18 years brought upon her. She had to leave the comforts of an urban life to embrace the hardships of the rural household of her husband. She had just passed class 10 and wanted to continue with her education. But she did not have the courage to go against her father's and brothers' wishes who believed that there was no point in educating girls as they were not supposed to take up a job. They thought it best to get rid of their responsibilities by marrying her off. Like a dutiful daughter, as girls are supposed to be, she meekly sacrificed her dreams to enter a new and difficult phase of her life at a very young age.

Her marriage was a big letdown for her. Her in-laws were basically farmers and not very well off. It was a joint family of parents-in-law and her husband's four brothers. She had no option but to fit into the framework of a docile and shy daughter-in-law and abide by the wishes of her elders. She lived in a mud house (with no toilet) whose rooms would flood in the monsoons, so much so that there was no place to cook food. This was in stark contrast to her brick-walled house in Gorakhpur with all basic facilities.

She mostly stayed indoors and was too immature perhaps to even think of women empowerment. It was a difficult life in the village and she was forced to endure it—where else could she go with her 3 kids—2 daughters and 1 son. But when the going became very tough she and her husband separated from the rest of the family.

HER WORK AS A FARMER
It was only later when she came in contact with some NGO group that she became emboldened enough to fight for her and other women's rights.

Preeti's journey to become a successful woman farmer has been a difficult one—more so because she was from an urban background and had no idea about what farming was. She says, “I was not educated much, but wanted to improve my economic situation. I wanted to educate my children to give them a better future. Farming was the only recourse left for me."

She had in her the drive to learn new things and slowly became adept at farming. Now, “I do everything on my own—sowing, ploughing of fields, reaping the harvest and even selling my crops in the mandi. I started by growing vegetables like spinach, carrot, radish, and peas. I would travel long distances to sell the vegetables. But now I also grow wheat and paddy. How many other women can do all this all by themselves?”

She also got trained to make organic manure and pesticides after coming in contact with Gorakhpur Environment Action Group (GEAG) and since then has been using her self-made organic manure (compost) for the crops. This has proved to be a real game changer—“Earlier we would use urea chemical fertilizers and our earnings were less. But vegetables grown organically, being healthier and tastier, are more in demand and fetch a higher price too.”

“Farming has helped me a lot. I grow something or the other all the year round. The paddy that I grow feeds my family. The vegetables are money earners. I have mostly self-educated myself on farming techniques. I only took training to make manure and then taught this to other women too. I have been associated with the Aaroh Mahila Kisaan Manch ('Aaroh' is a campaign for rights and recognition of women farmers in Uttar Pradesh supported by Oxfam India) since the last 10 years and have also motivated other women farmers to become its members.”

Her husband is not into farming and works as a labourer specializing in fitting marble tiles. He was given 1 bigha (0.5-0.6 acres) land as his share in his father's property. Preeti managed to take 1 more bigha from the parental property share after a long drawn out legal battle.

“I really fought for many years to get my husband's share of land. After my father-in-law died my husband was not very keen to fight for his rightful share of land. But I stood my ground and today I have this land with me. The 2 bighas of land are in my husband's name, but I think that at least all land should be in joint names of husband and wife and then the husband would not be able to sell it without his wife's consent.”

FIGHTING FOR WOMEN'S RIGHTS
The difficulties which women of her village faced everyday encouraged her to do something for their betterment. She was closely involved in establishing women's self-help groups (SHGs) in the village and motivated women to join them. “We increased our kitty to INR 50,000 through small individual contributions of INR 10, 20 or 30. In case of need they can take loan from it at nominal interest.”

An improvement in economic status and general awareness has helped Preeti mobilize the village women to fight for their rights and negotiate better to redress their problems—“I try to empower other women and train them in any new technique which I learn, and collectively we fight for our rights. I feel rural women are more ready to fight for their rights out of economic necessity. Urban women are more complacent as their husbands have jobs and perhaps this financial safety makes them unresponsive.”

Besides being a successful farmer, Preeti has been at the forefront of fighting for development and gender justice: “We have some important achievements. We women collectively managed to force the RPF people not to release the water from their flooded compound into our fields and homes during every monsoon. We did a lot of dharnas (sit-ins) and then only did they improve their drainage system.”

“We are also agitating for proper functioning of the public distribution system (PDS). There are many anomalies in villages regarding functioning of ration shops. Although all households have ration cards, only those whose cards have been put online, are getting the rations from PDS. Even they are not getting their full due—they are entitled to receive 35 kg in a month but the shopkeeper doles out only 10 kg and makes an entry of 35 kg. We have been protesting and demonstrating against this anomaly and have even approached the DM. but though enquiries have been made, the situation has not improved.”

“Recently I came to know that some women were charged INR 10 per kg for wheat, instead of INR 6 per kg from the ration shop on their white coloured card (yellow card holders get it at INR 10 per kg). when I threatened to report the matter the shop owner returned the excess money he had charged.”

Some self-styled local political agents/middle men in the village would collect INR100 from each of the 400 households on the pretext of getting some village work done at the district level, saying that they had to pay bribes to get the work done. One day Preeti thought that enough is enough. She asked them to give the villagers an account of the expenses incurred, which they did not. So, at her behest, the villagers stopped giving them money and themselves started going to the city to meet the officials and saw that they did not have to pay any bribe. Thus Preeti helped stop the illegal practice of money collection.

WOMEN FARMERS
Women farmers face lot many other difficulties too. It is not uncommon for their land to be usurped by antisocial elements. Or else, very often, the husband sells the land without the wife's consent, for short-term financial gains. Preeti has helped many such women get back their land by acting as the go between.

She rightly feels that women and men have to collectively fight for the irregularities that have become part of our system, more so because of public inaction—“We do not get our rights on a platter-- we have to fight for them. I always help other women to get their rightful due.”

WOMEN'S EDUCATION, MARRIAGE AND FAMILY PLANNING
Preeti believes that it is very important for women to be educated. She has helped many women to at least be able to write their names—by using charcoal pieces while working in the kitchen, when nothing else is available.

“Girls should not be married at a young age. I bore the brunt of early marriage but will not let my daughters be married off quickly. My elder daughter is doing her graduation, and the younger one is in class 12. I will not marry them till they finish their education.”

“I also believe that we should limit our family. I have borne 3 children, as I was ignorant about family planning methods. But one should not have more than 2 children. A small family is indeed a happy family.”

NEVER SAY DIE
There is a sea change in the firebrand Preeti of today as compared to the meek and submissive Preeti of yesteryear. Financially she is better off and her living standards have improved. She has also bought some land to build another house by taking loan from the bank. All this has bolstered her self-confidence. She proudly claims that she is now fully capable of running and managing her family even in the absence of her husband. Preeti concedes that although he does not help her with farming, he does acknowledge his wife's capabilities. “He has given me a free hand and I manage everything single handedly—right from doing household chores, to working in the fields, to looking after my children's education, to helping and galvanizing other village women.”

Preeti has conquered many male dominated bastions and treaded upon paths, which others would normally fear to step upon. She is at the forefront of spearheading demonstrations to fight for not only the rights of women farmers but of all the villagers—forcing authorities to get the drains cleaned, voters' list corrected, water-logging removed; ration cards anomalies rectified; freeing land from encroachers—the list can go on and on. No wonder that even people of her native town of Gorakhpur marvel at her achievements and look upon her with reverence.

Preeti offers sane advice—“Other women should take a lesson from me. After my marriage I had lost all hope and resigned myself to my fate, thinking that this was the end of my happiness. But slowly I gathered courage and changed my own fate through my hard work. Where there is a will there is a way. Life is too short and precious to be wasted away within the closed walls of our homes. We should learn from, and teach others continuously.”

Shobha Shukla, Citizen News Service - CNS
(This article is part of a soon-to-be-released Oxfam India publication: "The Leader Lies In You - Success stories of women farmers in UP")