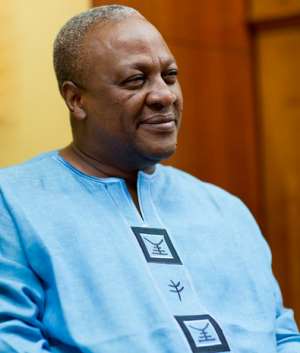 The moderator of the Presbyterian Church of Ghana and Chairman of the Christian Council, Rt Rev Professor Emmanuel Martey, has accused the Mahama administration of stoking a nonexistent 'war' between Christians and Muslims to divert attention from the worsening power crisis also known as 'dumsor'.

'Let me say it here and now. If there are any reporters; you see, I'm the chairman of the Christian council; I have not spoken because a wise person does not speak fast. You study all the situations before you speak. There is no fight between Christians and Muslims in this country.

Look, the whole of last week on the radio, everywhere, people were not talking about 'dumsor'; they were talking about Christians and Muslims.

'This is the strategy of the politician to divert attention so that the main problems of the country, we forget it. But let me tell you, we'll not forget it. We'll keep on saying: 'Fix the 'dumsor' now now now.' Listen, Ghana is not a big country to fix this problem. In four months you can solve it; at most in six months…If I were in charge, within three months I will solve the problem…Look at the loans we are taking; this is a crisis, why can't we use the loans to fix it? Then you tell us you will fix it, when?' Prof Martey quizzed.

Various Christian and Muslim groups have been involved in recriminations concerning rights of Muslim students in missionary schools, as well as the right of Muslim girls and women to wear their hijab at workplaces following a directive and a threat from the government, through the Minister of Communication, that heads of schools or institutions who infringe on the rights of Muslims will be sanctioned.

The government's threat was issued barely hours after Muslims in the Western Region went on a demonstration mid last month to protest against 'discrimination' against them.

Delivering a sermon to the congregation at Akyem Old Tafo Grace congregation in the Eastern Region on Sunday, Prof Martey said both the Communication Minister and Education Ministry were 'wrong' to have jumped to the public with their 'threatening' comments.

'They were wrong. If you are a leader, when such a fight comes, you don't speak in public like that. We are talking about religion…,' he stated.

'Look, the Ghanaian Christians and Ghanaian Muslims are capable of solving this problem so politicians don't muddy the waters,' he added.

In his view, President Mahama also jumped the gun on the matter by issuing public directives on the controversy.

'His Excellency spoke too early. It's unfortunate that he brought this case up in the State of the Nation Address. It was wrong. It was wrong also to talk on the Independence Day about a war which is not there, about a tension which is not there. There is no tension between  Christians and Muslims. There's no war between Christians and Muslims, there is no war.