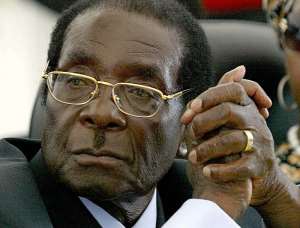 Last Saturday (February 21, 2015), President Robert Mugabe of Zimbabwe, the oldest head of state on planet earth, turned 91. He has ruled Zimbabwe for 35 years – since 1980 when the country gained independence from Britain.

For many years now, Mugabe's birthday bash has become a big, lavish event in Zimbabwe – a country where majority of its 14 million people live below the poverty level. This year's celebrations which will be held a week later on February 28 will, according to reports take place at a “championship golf course at Elephant Hills, a plush hotel resort with spa, pool and tennis courts near the Victoria Falls.”

The ceremony is estimated to cost about US$1million (one million dollars) and part of the money is being sourced from the citizens. There were even reports that some impoverished villagers are also being compelled to “freely donate” money so that Mugabe could have his big party. Zimbabwe's Daily News quotes the head of the Progressive Teachers' Union, Mr. Raymond Majongwe, as saying that teachers all over the country are being forced to part with between one to ten dollars (depending on the status of the school where one is teaching) to fund the very expensive feast. This has however, been denied by Tongai Kasukuwere, the Finance Secretary of the ruling Zanu-PF's Youth League who urged anyone “being forced to donate to the gala [to] report to the police.”

The opposition Movement for Democratic Change (MDC) has, however, dismissed Mugabe's party as an “obscene jamboree.”

“As the MDC, we are greatly perturbed to learn that instead of focusing on more serious and pressing national issues such as rehabilitating the country's collapsed public health delivery system as well as the renovation of the nation's dilapidated road and rail infrastructure, Zanu-PF has seen it fit to squeeze the sum of US$I million from the country's ailing business sector in order to bankroll the nonagenarian's birthday jamboree in the resort town of Victoria Falls…The majority of the people of Zimbabwe are living in penury, squalor and destitution, and thus, it would be grossly offensive for Robert Mugabe and a few of his hangers – on to wine and dine…on Saturday, February 28, 2015,” MDC spokesman, Obert Chaurura Gutu, said in a statement in Harare.

If indeed Mugabe is having his birthday party on Saturday as scheduled, would move without some help from his car to his seat and freely acknowledge greetings from the 22, 000 selected guests expected at the ceremony, then it means that he has had a remarkably quick recovery from the fall he experienced recently. On February 4, Mugabe had tripped on a red carpeted staircase and came crashing down to the ground on his hands and knees as he descended a podium at the Harare International Airport after addressing a crowd of supporters that had come to welcome him on his return from Addis Ababa, where he had just been made the new Chair of the African Union (AU). There were fears that given his age, it would take quite some time before his doctors and physiotherapists would certify him fit for public activity given the predictable effect of such a fall on his knees and ankle bones. But, surprisingly, Mugabe was able to attend the meeting of the Southern African Development Community in Pretoria last Friday where he expressed joy that he had attained the age of 91.

“I'm very happy to be that age,” he said. “I am happy that God has looked after me."

Another exciting news for the nonagenarian is the return of his 49-year-old dear wife, closest ally and “power behind the throne,” Grace Mugabe, from Singapore on Sunday February 15 after two months of medical treatment for an undisclosed ailment. While she away, speculations were rife about the state of her health including that she was at some point in coma. Some reports, however, claimed that she had a surgery for appendix. Her return also intensified the rumours and reports that she had been anointed Mugabe's successor. Whatever is the case, Mrs. Mugabe will share the moment with her husband on Saturday as he blows out the 91 candles that would surely be lighted on his usually very large birthday cake.

But the biggest news for Mugabe this season may, perhaps, be what is now being described in the media as his “victory” over the West, especially, the European Union (EU), which announced two weeks ago that it has resumed direct aid to Zimbabwe and lifted the travel ban imposed on some key members of the Zimbabwean government. For many years now, Mugabe has accused the EU led by Britain, and the United States of trying to achieve what he calls a “regime change” in Zimbabwe. The aim, he maintained was to replace him with a stooge who would reverse the “land reforms” his government had undertaken which saw large farmlands which had been in the hands of a tiny minority of white settlers (to the great disadvantage of the vast majority of black Zimbabweans) “recovered” and redistributed.

Now that the EU is relaxing its sanctions without confirming any conviction that any improvements have been recorded on Mugabe's poor human rights records, corruption and anti-democratic actions, which it had always cited as reasons for those sanctions, analysts across the world would be left wondering if the EU is not being driven by enlightened self interest to undertake this self-deprecating somersault?

In 2012, when the EU first announced its intention to relax the sanctions, a reader on a South African news site posted this comment:

“The British Government does not act out of charity. It is scrapping sanctions on Mugabe because Britain needs Mugabe more than Mugabe needs Britain. It may not be about the oil stupid! But it certainly is about the 40 other exploitable minerals sitting under Uncle Bob's feet. The 4000 or so white farmers that must be disgusted by this are mere 'collateral damage' in the war for Zimbabwe's resources. Remember why Mugabe is hated, he gives land and minerals to the black poor. Highly inconsistent with the UK's extractive multinational capitalist approach.”

It is obvious that Mugabe will now get away with all his alleged dismal human rights records because the West does not wish to lose out in the big contest for Zimbabwe's rich minerals where the East Asian countries have already used the period of the pariah status placed on Zimbabwe by the West to dig in.

The MDC's leader, Morgan Tsvangirai, despite years of massive Western support only managed to become the weaker party in a power-sharing arrangement brokered for Zimbabwe by South Africa after the disputed 2008 elections. And with the hope of “democratically” unseating Mugabe and his ZANU-PF diminishing with each passing day, and Tsyangirai appearing increasingly uncomfortable with being widely labeled a Western stooge, the EU appears set now to drop all pretensions and adopt a more pragmatic approach.

Yet, Mugabe and his Zanu-PF stalwarts are not even celebrating the EU gestures, thus aggravating the embarrassing situation the EU has presently found itself.

"To put it very bluntly Mugabe has won," Richard Dowden, director of the London-based Royal African Society was quoted as saying. There has been an “immense amount of Western pressure” on Mugabe, “to step down and reverse some of his policies – and he's done neither," he said. And yet the EU is lifting sanctions on his government and resuming direct aid.

So, it will be a triumphant Mugabe that would roll out the drums and bite into a rich, delicious piece of cake this Saturday as he celebrates his 91st birthday. And without mincing words, he would tell his people: Now, it should be clear to you that I have been right all along and the West was wrong. While Mugabe savours his double celebration, it is up to the Zimbabweans to decide how long more they would be able to tolerate him, and possible, his wife.
------------------------------------------
Ugochukwu Ejinkeonye is a commentator on public issues is columnist with Daily Independent newspaper, Lagos. His column appears on the back page of the paper every Tuesday. ( [email protected]; www.ugowrite.blogspot.com)