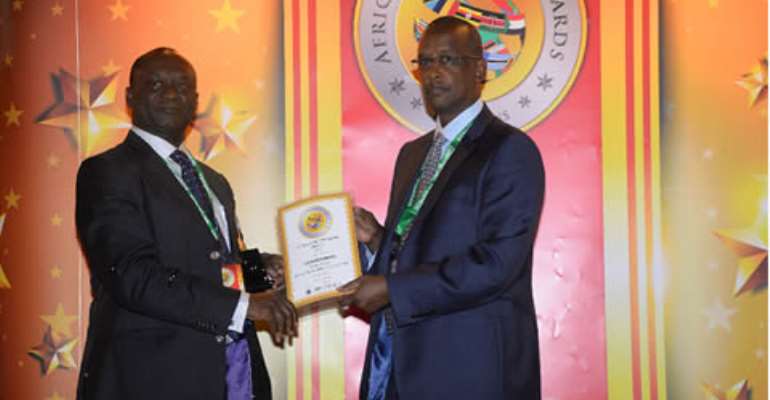 Mr. Stephen Kyerematen, the Managing Director of Activa International Insurance Company Limited, who doubles as the CEO of Activa Finances-Mauritius, has been awarded the “2014 AFRICAN LEADERSHIP AWARD (Finance)”.

The award is in recognition  for the promotion of insurance solutions and Corporate Social Responsibility activities in the Ghanaian market.

Two other Ghanaians who received awards at the same ceremony are Professor Out Ellis, Vice Chancellor of Kwame Nkrumah University of Science & Technology and Mr. Francis Dadzie, CEO of the Advertisers Association of Ghana.

The African Leadership Awards are given annually to recognize the achievements made by selected high profile corporate business leaders in Africa to honour their great contributions towards the country's economic development.

Mr. Stephen Kyerematen served briefly as former Ghanaian High Commissioner to Malaysia with concurrent accreditation to Thailand, Philipines, Indonesia and two other South East Asian countries. Prior to his appointment as CEO of Activa Finances, the holding company of the ACTIVA GROUP in which the IFC has equity participation,  he was the Managing Director/CEO of Activa Insurance Ghana; a position he still holds.

He currently holds board positions at UGAR-Activa and LGV-Activa in Guinea as well as in Activa Foundation. He is the Board Chairman for Activa Liberia and Activa Sierra Leone.

He serves as the co-ordinator of Business Development in Anglophone markets for the GLOBUS Insurance Network managed by the ACTIVA GROUP.