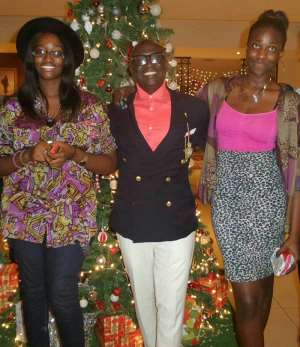 LEGAL BRAINS and gender right activists have described the decision to discontinue the court case in which broadcast journalist Kwesi Kyei Darkwa (KKD) is standing trial for rape as a worrying development that could reflect badly on Ghana's judicial integrity and criminal jurisprudence.

'It is a bad signal especially when this person (the accused) we are talking about is an influential person in the entertainment industry… This case was going to be a very good case study for people who do this kind of thing in society to know the law is not a respecter of persons and that whatever you do you will be actually held responsible. I am so disappointed that the lady involved did not let the law take its own course and just withdrew the case,' Gender Activist and Executive Director of Gender Centre for Empowerment Development, Esther Tawiah, noted on Starr FM Wednesday morning.

She said though the complainant, Ewureffe Orleans Thompson, according to reports, decided to discontinue the case because of the 'media frenzy' which she finds insensitive, the decision could potentially land her in a worse situation.

'In fact what she has caused for herself now, the trauma and everything, is worse than if she had gone on with the case. Because people will start saying a lot of things against her. For instance, she might have been given some money… someway somehow,' Ms Tawiah stated.

She continued: 'You can't [blame] her entirely. Mental health workers should be involved…not the police alone. When you are talking to the police alone sometimes you are scared, but when these people are able to 'conscientise' you, let you know that what you are doing is the right thing, not hiding it. If you hide, it is worse.'

Private legal practitioner Francis Xavier Sosu has told the same station that the complainant could even be sued by the State for her decision to withdraw the case.

'Depending on the basis on which the lady withdrew the case, two things can happen. KKD would indeed have a right to go to court to seek redress against the lady in question. ..And the State can also proceed against the lady for deceit of public officer, which is a crime under the law,' Lawyer Sosu opined.

Francis Sosu opined further that the sudden decision to discontinue the case supports the widely held perception that well-known and influential persons can buy their way out of criminality even when the law catches up with them.

'We need to protect the judicial integrity and then the criminal jurisprudence of this country…Otherwise you'd open the floodgates for people who think they are strong and mighty and influential to commit offences and get away with them,' Sosu added.

Meanwhile, three of Ghana's best lawyers, Ace Annan Ankomah, Bright Akwettey and John Ndebugri, each had a different opinion on the consequence of the decision of the complainant to discontinue the rape case.

Discussing the topic on Citi FM, former Chief State Attorney Bright Akwettey said the case cannot continue without the supposed victim or star witness. He said prosecuting a rape case is about adducing and providing evidence to the courts and the moment the complainant pulls out of the case, it becomes impossible to incriminate the suspect.

Lawyer and former Member of Parliament, John Ndebugri, however had a different opinion and insisted a rape case is a criminal case in which it is the State versus the suspect, adding that the decision of the complainant to discontinue would have bearing on the case.

'… when you have reported a crime to the Police and the Police starts investigations and begins to charge the accused, the matter is not more in your hands; it is in the hands of the State…It is the Republic against the accused person. It is not Mr A or B against the accused person…I do not think that it is right for us to conclude that just because somebody who had reported the case turns round to say that he or she is not interested therefore the case must come to an end; I don't think so.'

Interestingly, private legal practitioner Ace Annan Ankomah said both Lawyers Akwettey and Ndebugri are right with their interpretations of the law.

He explained: 'In a criminal matter, the actual party in the case against the accused is the State. It is not even the person who is the complainant. It is not even the person on whom the crime was committed… In criminal matters, the State gives the principal party; and so technically, even if the complainant says that I am no longer interested in the case, the State can say that probably, we don't even need you because we have enough evidence to go ahead with what we are doing…So in theory, that should be it.  The State ought to be able to put its foot down that it's going to go ahead. But throw it into the practice, and then you will see that the theory has issues.'

Mr Ankomah wondered whether the State is willing to subpoena a 19-year-old to testify in a case she is no longer interested in.

'In this case, are we really saying that we want to see the 19-year-old summoned by a subpoena to become a principal witness to the case? So you see where the theory and practice don't jive?'

COVID-19: 3months Free Water For All Ghanaians Begins
48 minutes ago