Campaign Manager For Victory 2016 - Can Dan Botwe Do It Again? 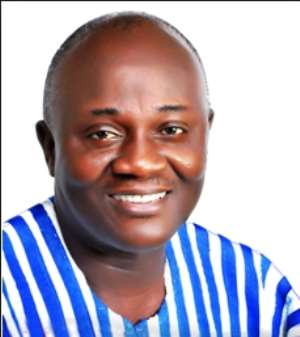 He is one of those rare politicians, who have never failed in their political career. At all stages of his political career, he has consistently fulfilled his promise to his electorate. When it was a crazy thing in Ghana to fight the Rawlings dictatorship in the 1980s, he, as National Secretary of the National Union of Ghana Students (NUGS), fearlessly put his life and academic fortunes and interests on the line, to join in the fight for multi-party democracy for Ghana. Politics runs in his blood.

No wonder, following his sterling performance in his first term, he was returned unopposed to serve as the Party's General Secretary, for another 4 years.

“General”, as he is affectionately Hon. Dan Kwaku Botwe is a highly respected Politician both within and outside the NPP. His political maturity which is characterized by his ability to cordially interact with various peoples, makes him an asset, as politics, is primarily about people relations.

Over the years, Hon. Dan Botwe has worked in various capacities, in the trenches with most of the past and current Constituency, Regional, and National Executives of the Party. He has a long standing cordial relationship with the Party's support base. They believe in his leadership and management, and he understands them and knows how to court them to follow the Party's direction. They have worked with him, and they trust him. He is familiar with them, and he understands them. He is remembered as the General who never abandons his foot soldiers in the trenches.

A senior Party Executive in the Northern Region said of him: “as for General, when you are working for him, no matter where he is, you will feel his presence by your side when discharging your responsibilities”. That speaks volumes.

A master political tactician, Dan Botwe managed the Party so well, that decisions taken at the high levels of the NPP were adequately representative of various levels and branches of the Party, right down to the grass root level. Decisions so arrived at were implemented to the letter. Whatever logistics he promised to provide for a project, were delivered on time and work always moved on smoothly. This managerial skill adapted by Dan Botwe, fostered closer collaboration between the Party's structure at the National Regional Constituency and Polling Station Level.

Before his election to the position of General Secretary of the NPP in 1998, Dan Botwe was the Party's Director of Operations and Research and represented the Party on the Inter-Party Advisory Committee (IPAC) at the Electoral Commission in 1996. In 2008, he was appointed Head of Research and Strategy of the Party; a position he held until he was elected NPP Member of Parliament for the Okere Constituency. He is currently the Minority Chief Whip in Parliament. He also served as Minister of Information in the Administration of President John Agyekum Kufuor.

Also is the fact that the NPP flagbearer for Victory 2016, Nana Addo-Dankwah-Akufo Addo has an excellent working relationship with Hon. Dan Botwe. Nana trusts the “General”. They have worked well together in various capacities over the years, for the betterment of the great Osono tradition and have immense respect for each other.

The best choice of a Campaign Manager for NPP Victory 2016 is one who must have rich experience in Political Party management, excellent organizational skills, be level-headed, and have good inter-personal skills.

Going against a Party like the NDC, which has gained notoriety for rigging elections, and dribbling the Supreme Court, the NPP will need to put her best foot forward, and no better way to do that than to go in for a true-blue NPP person, who managed the affairs of the Party to floor the Opponent, twice.

It is in the wisdom of these and more, that the grassroot membership and the mass support-base of the NPP are calling on the flagbearer of the NPP for Victory 2016, Nana Addo Dankwa Akufo-Addo, to appoint Hon. Dan Kwaku Botwe, two-time General Secretary of the NPP, and Member of Parliament for Okere, as his Campaign Manager.

Nana Addo Dankwa Akufo-Addo is known to be a listening political leader. In all his political life, he has drawn his ears close to members and the mass support base of the NPP. It is hoped that he will not only hear their call to him to appoint Hon. Dan Kwaku Botwe as Campaign Manager for Victory 2016, but by the grace of God, will heed the call.