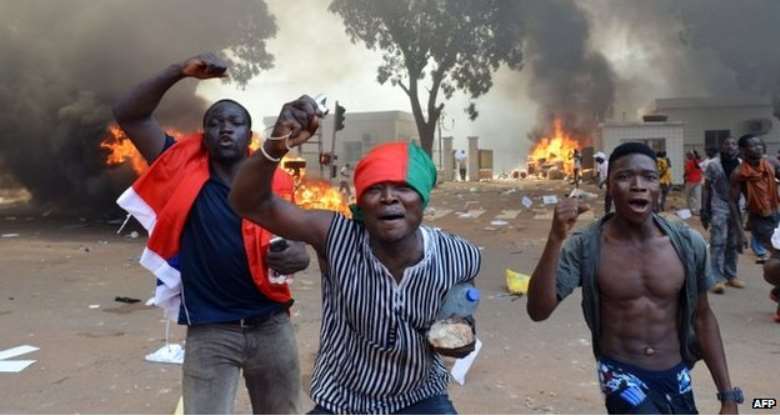 The 31st President of the United States of America, Hobert Hoover aptly stated that “The supreme purpose of history is a better world”. In essence, Hoover was making the point that the lessons of the past must inform our present and future actions so that mistakes of the past would not be repeated. Hoover was the first President of America to have redistributed his salary to charity (President John Fitzgerald Kennedy followed suit). This symbolic gesture demonstrated Hoover's love for the people he presided over. Importantly, it shows that presidents of today must seek the advancement of the people they preside over. If history is to serve us any good, then President Blaise Compaore, who resigned on 31st October, 2014 following the massive uprising of the Burkinabes, simply refused to learn from the political history of dictatorial presidents in Africa and other parts of the world.

Templates of Uprisings
The templates of uprisings abound in the history of this generation as the Arab Spring saw the resignation of Hosni Mubarak. Again, events in Ivory Coast saw Laurent Gbagbo who had become obsessed with political power ousted shamefully. These recent events should have cautioned Blaise Compaore that autocracy in this dispensation crumbles at the voice of the people. As a close ally of ex-President Thomas Sankara, Blaise Compaore became president in the 1987 coup that saw the murder of the charismatic military leader Sankara. Interestingly, Blaise Compaore initially ruled in a triumvirate (government led by three powerful military leaders - with Henri Zongo and Jean-Baptiste Boukary Lingani). Within the triumvirate dispensation, the obsessed Blaise Compaore arrested the other two; charged them for plotting to overthrow the government and eventually had them executed. But his cravings for political longevity was not enough as he would not step down but contested in the 1991 and 1998 elections and won in those disputed elections. Having served two terms in a row, the power drunk president would not step down. His intention to contest the 2005 elections was challenged on the basis that the 2000 constitutional amendment had limited the president to only two terms of five years each of which he had already served. The Burkinabe constitutional council ruled that because Compaoré was a sitting president in 2000, the amendment would not apply until the end of his second term in office. So he won the 2005 elections as well. That was still not enough for the President and to perpetuate himself on the presidency, he caused another amendment bill to be occasioned in June, 2014 that would allow him contest the 2015 elections. Cumulatively, Blaise Compaore had ruled the country for 27 years non-stop!! Guided by the political biased nature of the National Assembly that was to debate the constitutional amendment which would have certainly allowed Compaore's re-election bid, the masses revolted and set the parliament building ablaze; forcing his resignation.

If Compaore could not leave any legacies during his 27 year stay in power, what could he do given an additional five years? I doff my heart to the people who have resisted this unpopular move by the now resigned president. After all, they have seen worsened socio-economic conditions in the country for the past 27 years under Compaore. It is important to note that in all those years, the people have had to endure the ceaseless machinations of Compaore to side-step the constitution within the context of ailing democratic regime. And so Pargui Emile Paré, the opposition spokesman was right when he described the people's action as a 'Black spring'. Certainly, following the stead of the Arab Spring, dictatorial power has been quashed and the man with a penchant for autocracy has been toppled down by the voices of the people.

Compaore's Allies
In the wake of the happenings in Burkina Faso, caution is hereby thrown to the major international allies of Compaore namely the US and France both of whom have used Burkina Faso as a military base to shed off activities of Islamists militants in the Sahel region. Yes, they must be guided by the very history of their own democracies. They must be guided by the sayings of Herbert Hoover and reckon that history is to better the world. Eyes are watching how the US and France as well as the many other international allies would respond to the people's call for the demise of autocracy in its clandestine form as Compaore exemplified. The world is watching whether his allies will encourage true democracy or support dictatorial regime under the guise of democratic elections skewed to favour one political party which has become the norm in many parts of Africa.

In his response to the events in Burkina Faso, the ECOWAS Chairman, President John Mahama has seemingly shown discontent towards the masses; in clear support of Compaore's attempt to extend his stay in power. Strangely, the statement from the ECOWAS Chairman was ill-timed as Franklin Cudjoe of IMANI has pointed out. The president failed to condemn Compaore's attempt to entrench himself on the state. It is clear that President Mahama is oblivious of the fact that the masses effort does not constitute a coup but rather a show of resistance against autocracy and gross disregard for the country's constitution. The simple point is that the Constitution had set limit of the tenure of the country's president and Compaore had exhausted the mandatory regime(s) of his stay in power. His quest for amendment to change this constitutional provision is in my view a coup clothed in ailing democracy. Indeed, Compaore's action is best described as using democratic institutions to stage a coup and certainly the people had to revolt! And the least President Mahama could have done was to commend the Burkinabes and reproach Compaore. This is not surprising after all ECOWAS is a failed regional body that only barks without biting. The good thing however is that Compaore has been axed out of office!

The lessons
The 'Black Spring' presents another lesson to continental Africa. Inscribed in this revolt is that power is transient and that having the ability to win elections does not mean the people will succumb to anything against their will. It shows that subservience can be perpetuated only within a certain time and not all the time. It also shows that the heavily yoked masses will revolt in whatever form they deem fit when they can no longer contain the bad policies, ruthless governance; corruption escapades of political leaders and the failed promises of those in power. Let the power drunk presidents of African countries continue to tame the political might of the people and someday soon, their follies will be exposed and they would be toppled down without the gun but with the voices of the masses. But let not the transition government follow the stead of power-drunk Compaore. Let them thread cautiously and allow true democracy to thrive in Burkina Faso.

The gavel of mass revolt has been tinkled; let the autocratic African presidents be warned!