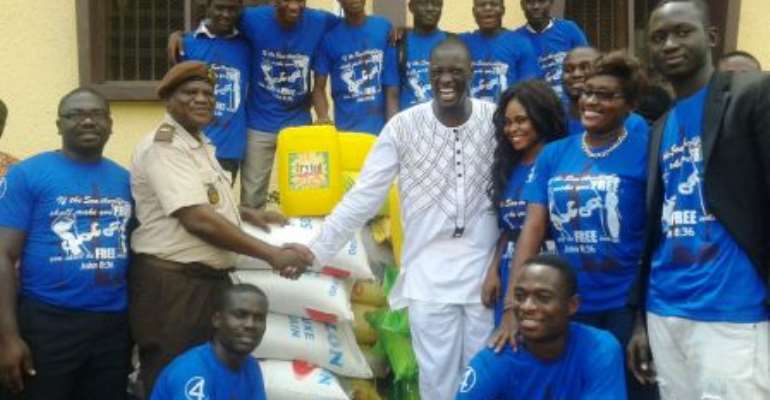 It's been four years since the former hiplife superstar was “arrested” by the Holy Spirit to start his Christ business as a 'born-again.'

For Evangelist Lord Kenya, October 28, 2010 will forever remain important, and he chose to commemorate his 4th anniversary of his new life in Christ with inmates of the Kumasi Central Prisons.

In demonstration of his commitment to the prisons ministry, he also presented foodstuff and other items to inmates.

Lord Kenya shared testimonies and encouraged inmates to “know that whatever that is happening to them, God loves them.”

According to him, “once by the grace I'm not dead they also need to be encouraged that all is not lost and especially some of them are there innocently.”

The 'rap heavyweight champion' tells Luv News starting a new life has not been easy “but the most important thing is that I cannot compare the dark and the light; so it's been challenging but also very fulfilling.”

Evangelist Kenya is most excited at the number of lives he has touched in the last four years as he frequents schools, churches and open spaces to preach the Gospel of Christ.

From the ghetto to the church has been the central theme of his evangelism, testifying of his addiction to drugs and eventual miraculous liberation by “an invisible hand”.

“Soul winning is our agenda, so lives have been touched in terms of those who have been lost are getting found and also helping others with drug problems and coupled with the healing which is my gift through my ministry; we say glory be to God,” said the Evangelist.

He is trusting God to take his ministry to a higher level but Lord Kenya has his eyes high up on establishing a rehabilitation centre for addicts.